There are about 3,000 of the total 9,000 families who have accepted the government’s offer. But Gupo said there are some who have returned from the relocation site because there are no livelihood opportunities available in Montalban.

“What would you do with a fancy house if you cannot earn a living?” Gupo said, “Are they telling us to eat the wall instead?”

Gupo said transferring to Montalban would create difficulties for children studying in public schools nearby and for those who are employed in offices within Quezon City and in neighboring cities. Most of the residents are minimum wage earners and at times, earn less. They are working either as security guards, construction workers, drivers or salesladies. Gupo said if they transfer and live in Montalban, they would spend P120 ($3) more for their fare.

Worse, Gupo told Bulatlat, the relocation site is right in the middle of the Marikina fault Line. He said the fault line extends from the Sierra Madre mountain range to Bulacan, eastern Metro Manila Rizal and Tagaytay City. The Philippine Institute of Volcano and Seismology, which has been monitoring the movement of the earth along the fault line, said it could generate an earthquake with an intensity of 7.2 magnitude.

“It is not recommended for housing facilities because in five to ten years time, it might open up,” Gupo said. With this, they now dub their relocation area in Montalban as “Mental-ban’ because, he said, it would be mental to resettle there in the first place, and secondly, those who have accepted the government’s offer would lose their sanity with the miserable life that awaits all of them. 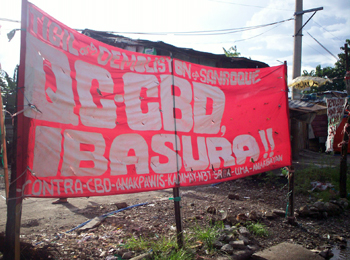 The Quezon City Central Business District (QCBD) is a 256-hectare project that would supposedly put Quezon City, if not the entire country, “at the forefront of global investment and business interest.” (Photo by Jennifer Chan / bulatlat.com)

Gupo said they are not fighting to own the land but to get what is due and fair to them. He said urban dwellers in Sitio San Roque should get an “on-site” or “in-city” relocation. The on-site relocation they are pushing for is the construction of a semi-high rise building or bliss type housing facility that would be placed within the QCCBD compound. The in-city, on the other hand,would be a relocation area within Quezon City.

The residents have already held a dialogue with the NHA four times since they first received the 30-day notice of demolition on May 2010. They were hoping that the government agency would consider their suggestions. However, Gupo said, NHA officials are insisting that they would have to transfer and resettle in Montalban.

With the threats of demolition only two or three days as of press time, Gupo said, the residents are ready to defend their homes and their rights.

“I will only put my family in much more danger if we decide to go to Montalban. We would rather stay and fight instead,” Vidas said. (Bulatlat.com)