Dr. Alex Montes, also one of the Morong 43, said the jail guards are justifying the withholding of the medicines by saying that the detainees might commit suicide. “We don’t have that kind of inclination. We are health workers. We do not want to destroy ourselves,” Montes said.

Bishop Pabillo gave them medicines for chronic illnesses and multivitamins.

Montes said jail authorities told them that if ever any of them would need to be hospitalized, they need to secure a court order. This policy, Montes said, is not being applied to everyone as affluent detainees are brought to the hospital at the slightest of reasons.

Doloricon said Mercy Castro, a pregnant detainee who will give birth this October, was not allowed to have her medical checkup despite a court order.

Castro said jail authorities flatly told her no one was available to escort her to the hospital. When she asked to reschedule her checkup, the jail authorities said her lawyers need to ask for another court order.

The mood was almost festive at the female detention facility. After introducing themselves to their visitors, the female detainees shouted in chorus: “We are the Morong 43!”

Then they sang “Martsa ng Bayan” (March of the People) with Jane Balleta, granddaughter of the late labor leader Crispin “Ka Bel” Beltran playing the guitar. Martsa ng Bayan is a progressive song popularized during the Marcos dictatorship.

“If serving the people is a crime, so be it. We are not daunted. They could never dampen our spirits…Behind these bars, our hearts and minds are free,” Maria Elena Serato, one of the detainees, said tearfully. 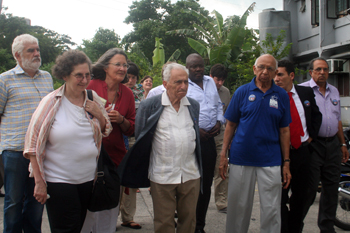 The lawyers inspired and moved by the militancy of the detained health workers. (Photo by Ronalyn V. Olea / bulatlat.com)

Serato added that when freed, they will go back to the communities they left behind. “We remain steadfast to serve the people with dignity,” Serato said to the applause of the foreign visitors.

“I am so moved by your spirit and camaraderie. We are going to take your spirit with us wherever we are,” Mirer told the female detainees.

Roland Weyl, dean of the Paris Bar Association and first vice president of the IADL, said their support for the Morong 43 is not only because of humanitarian reasons. “We know that by fighting for you, you are fighting for us.”

“It’s amazing to see how strong you are despite everything that had happened to you…It’s fantastic. I am moved and it has given me more encouragement to take your case,” Michael Gooding, a lawyer from United Kingdom, said.

“I’m very proud to be an Asian woman like you. I think you are struggling for all of us. We will be with you until you are free,” Nimalka Fernando from Sri Lanka said.

“It’s amazing to see that amid your conditions, your militancy and the understanding of the work still to be done is clear,” Luis Roberto Zamora Bolanos from Costa Rica said.

Bolanos also praised the female detainees for providing services inside the jail. Every Monday and Thursday, they conduct medical checkup for other female detainees. They also taught the other detainees how to take vital signs and how to prepare herbal medicines.

Gail Davidson, a lawyer from Canada, told the Morong 43 detainees that she would write a letter to the Philippine government and to the United Nations Working Group on Arbitrary Detention about their plight.
(Bulatlat.com)