On Sept. 21, during the commemoration of Martial Law, members of the Davao media and members of various organizations, including listeners of RMN Davao gathered at a program in front of the radio station along Corner Anda and Bonifacio before proceeding to a street march.

The activity, according to its organizer, the National Union of Journalists of the Philippine (NUJP) Davao Chapter, was meant to “highlight the call for defense against current attacks on the media profession.” 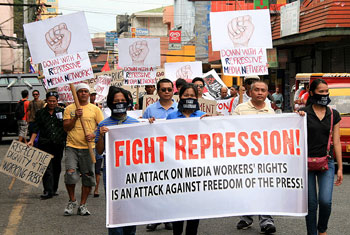 Media workers, led by RMN-Davao personnel, hold a rally in remembrance of the 38th anniversary of martial law.(Photo by Davao Today / bulatlat.com)

In his speech during the rally, Rey Hernan Fabe, president of the RMN Davao Employees (RDEU), the situation at their workplace right now to the repressive condition faced by members of the media during Martial Law .

At the September 21 pre-march rally program right below the street where RMN Davao station is located, placards illustrated with clenched fists and calling for the downfall of what they call “a Repressive Media Network” were displayed.

Some placards urged the media to stand up for their rights, and called for RMN networks to stop trampling upon the rights of RMN Davao workers.

Members of the NUJP also posted placards that say, they support harassed colleagues at RMN, including calls for RMN to respect the rights and dignity of fellow media workers.

Some listeners stood by despite the noonday heat to listen to the speeches. They also held raised placards expressing sympathy for sacked station manager Solis.

Who is Dodong Solis?

Nemesia Ombos, an avid listener of Solis’ daily primetime program, “Straight-to-the-Point” at an interview with GMA TV decry the absence of a favorite voice in the airwaves.

Members of the union played a pre-recorded commentary of Solis using his “Straight-to-the-Point” stinger through a sound box down the street in front of the station. On the said audio-recording, Solis vows he will not stop discussing people’s issues even if the owner of the radio station has kept him off the air since September 6.

NUJP Davao views the termination of Solis as an action to muzzle him, in light of the fact that Solis is noted for his progressive stance in his commentaries on air.