At the height of outrage over the abduction, rape and killing of a New People’s Army (NPA) leader’s daughter, Rebelyn Pitao, Solis had been asked of by burly looking men in his neighborhood.

Weeks prior to this, RMN Davao was able to record an interview with a military officer, a certain Captain Esnani Mai of the 67th Infantry Battalion based in Davao Oriental.

Mai, in that interview, tagged RMN-DXDC Davao as “a favorite of the communists.”

The recording was submitted to then chairperson of Commission on Human Rights (CHR), now justice secretary Leila De Lima, when she came to Davao City in April 2009.

The letter was also prompted by a threatening text message received by RMN Davao news director Elgin Damasco after he figured in an altercation with the military in Paquibato who accosted the RMN Davao vehicle where victims of military abuses in the area rode on their way to attend a hearing on their case at the Davao City Council. 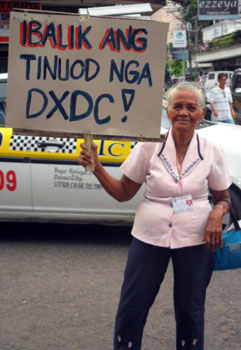 As member of the advisory council of NUJP Davao, Solis has been at the forefront of NUJP-Davao’s various campaigns in defense of press freedom.

Media workers at RMN-DXDC Davao figured prominently in protest actions against authoritarian attempts to curtail press freedom, such as the rally against the previous Gloria Macapagal-Arroyo regime’s Presidential Proclamation 1017 which was seen by media groups as a draconian attempt to control broadcast content.

NUJP Davao notes in its statement that the campaign to free jailed broadcaster Lex Adonis for libel in 2008 “would not have succeeded without the tedious support of RMN-DXDC Davao staff.”

Likewise, media workers at RMN Davao, under Solis’ leadership were, according to NUJP Davao, led the protest action against the perpetrator of the physical attack inside the radio booth suffered by Roel Sembrano, a broadcaster based in the remote town of Compostela, in Compostela Valley in 2008.

Also, Solis’ contribution to the prosecution of the murder case of a former colleague at DXDC Davao who was assigned in General Santos City when he was killed in 2008, Dennis Cuesta, was crucial. He, along with NUJP Davao members helped a witness surface, resulting to the prosecution that led to the conviction of the killer.

In the same vein, Solis helped NUJP Davao in the work for justice for recent media murders, that of Mati, Davao Oriental-based broadcaster Jesiderio Camangyan, and Digos, Davao del Sur-based broadcaster Nestor Bedolido, whose murders are attributed against influential politicians they criticized in their work.

In a statement also read by a representative from her office, Librado said she is one with the workers against this attempt at “restraining journalists from what they are supposed to do, and threaten their freedom of expression, in ways that are now turning to be nasty and most unfair.”

GMA television news program director also came to the program and spoke in support to Solis, as well as veteran broadcaster Jun “Bagsoy” Gutierrez, who currently holds a program at DXUM Radyo Ukay.

Meanwhile, Carlos Canoy, one of the network owners who took over the management of the radio station, warned media personnel against discussing the issue of Solis on-air. Two key personnel of the station, program director Jessie Casalda and news director Elgin Damasco, were sacked after defying such orders.

After being scolded by Canoy on September 16 regarding their airing of Solis’ termination and the activities of the union, Casalda and Damasco were forced to submit a letter expressing their wish to resign to avail instead of the early retirement package offered by RMN networks personnel manager Jorge Sacdalan during the same conversation that Canoy had with the two.

Damasco and Casalda said they were afraid that if they would not do it they will no longer get anything from the company, given Canoy’s stance against them.

However, they are also not sure whether they will indeed receive anything from the company at all in the absence of any written proof of such offering mentioned by Sacdalan.

After all, the network, according to Casalda and Damasco, has a rule that only those who have served the company for 10 years shall avail of the early retirement package.

On the same day that Canoy confronted Damasco and Casalda, a man in plainclothes came to the RMN Davao station and told the guard on duty that he was there upon orders from Camp Crame “to secure the station.”

The NUJP Davao chapter viewed this latest development with concern.

In a statement, it has called Canoy’s action and that of the network management, as “condemnable and deserving utmost denunciation.”

Bagsoy shared his experience during martial law time where he recalled that repression prompted them to create a group called Movement for Enlightened Media or MOMENTUM. Gutierrez urged media groups to unite as a way of protecting themselves.

The NUJP Davao has expressed concern over the recent incidents of attacks against media members in Davao City, as well as the massive termination of media workers over one of the largest broadcast network in the country, ABS-CBN.

“We are sad that this implies badly upon the hallmark of our profession, that is to be able to freely write or speak what we feel to be spoken or written in pursuit of the truth, a right needless, to say, is constitutionally guaranteed as this is corollary to the people’s right to a free press,” the NUJP Davao statement said.

For NUJP Davao, the stark economic situation of journalists, and the unabated killings of journalists in the country “bespeak a condition of media repression.” Sadly, it said, “it is the people who are ultimately at the losing end.”

NUJP Davao urged members of the media to act as reforms will not happen if members of the media will not work for it. “We can start by campaigning against noted violators of media rights to send a message that the rights and welfare, the dignity of the Filipino working press should be respected,” NUJP Davao said. (By Cheryll D. Fiel/davaotoday.com)