DAVAO CITY — The urban poor in the city have another reason to protest in the streets these days. They rage not just because their houses are being demolished, but, this time, because they could not just take the rapidly increasing costs of surviving anymore, especially with the announced spike in electricity rates.

Sixty five-year-old Virginia Liguid, a resident of Bago Oshiro is resigned to the thought that she would lose her electric connection next month. She does not think she could still afford their electric bill next month anymore.

The Aboitiz-owned Davao Light and Power Company (DLPC) has announced that it will increase its charges for residential customers at P0.3539 ($0.008) per kilowatt hour starting August.

Nonito Bolos, convenor of the consumer alliance Power Dabaw is worried that since the power utility company has also raised the rates for commercial customers, prices of goods would also go up. 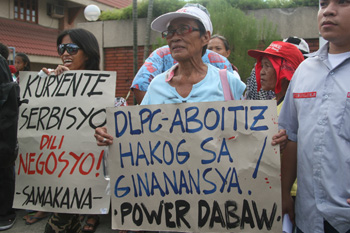 Virginia Liguid at the picket in front of Davao Light and Power Company DLPC office along Ponciano Street. (Photo by Karlos Manlupig / bulatlat.com)

“How could the poor even cope with that?” asked Bolos. We are sure that prices of basic commodities would be increasing pretty soon, too!”

For someone like Virgina Liguid, whose family survives on peddling pan de sal and vegetables each day, any change in the bills would mean a lot.

A P30 ($0.687) income from selling bread around the neighborhood each morning could hardly provide food for the family’s daily needs, let alone, electricity costs.

The DLPC announced that the new rate adjustment, which was approved by the Energy Regulatory Commission on July 15, would allow the company to avoid losses.

Aside from this, Bolos said, the DLPC even managed to acquire more assets lately, such as a reservoir in Maco town in Compostela Valley, and hydropower plants in Tudaya, Sta.Cruz Davao del Sur and in Mintal-Talomo area, and is now even eyeing to generate power from the Tamugan river watershed.

Bolos blamed the Electric Power Industry Reform Act (EPIRA), a law that privatized and deregulated the power industry, which was signed by former president Gloria Macapagal-Arroyo in 2001, for the power rate increase.

While the law, he said, was supposedly designed to bring down electricity rates, what is happening is quite the opposite.

“The EPIRA has allowed greedy power utility companies to extract more profits at the expense of poor consumers,” Bolos said.

As Bolos was saying this, Celeste Lobitaña, a resident of Punta Dumalag went atop a forward truck, mounted in front of the Aboitiz-owned Davao Light and Power Company (DLPC), which served as the stage during the picket program held in front of the DLPC office last September 29.

“Kuryente Serbisyo, (Power for service)!” chanted Lobitaña, and the crowd responded,“Dili Negosyo ! (Not for business!)”

The supply charge is the amount that the company spends for the cost of other services to customers such as billing, collection, customer assistance.

This, according to Bolos, was not announced by the company. “They have the gall to even pass this on to customers!” Bolos said.

The DLPC has tried to appease consumers by saying that they are offering what they call, a “lifeline subsidy discount structure.”

However, Franchie Buhayan of the urban poor association, Kadamay said this amounts to nothing.

“With the very low wages that workers get, they could not afford any hike in the bills. The power rate hike should be weighed on its social impact which would heavily affect the poor,” she said.

Buhayan said their group, together with other alliances, would not stop conducting information drives, street forums and other forms of protest to stop the power rate hike. She added that they are determined to collect thousands of signatures asking the courts to issue a restraining order against the DLPC.

They have started lobbying with local government officials and they are asking congressional representatives to move for the repeal of EPIRA as soon as possible, as this law is clearly “anti-poor and anti-people.” (Cheryll D. Fiel/davaotoday.com)