MANILA — Five years since its union president, Diosdado Fortuna, was extra-judicially killed while on his way home from the picketline, the striking workers of the Union of Filipro Employees (UFE) in Nestlé at Cabuyao, Laguna, conducted a protest last week at the Mendiola bridge near Malacañang to reiterate their demand for justice for the slain union leader. Fortuna was killed two days after former president Gloria Macapagal-Arroyo began implementing her administration’s widely condemned Calibrated Preemptive Response in 2005.

The UFE also brought their still unresolved strike issues to the labor department in Manila, after the Office of the President wrote DOLE a letter asking labor secretary Rosalinda Baldoz “for appropriate action and subject to existing policies, rules and regulations” regarding the “protracted labor management conflict at the Cabuyao factory of Nestlé Philippines Inc.”

The striking Nestlé workers had asked the new president as soon as he was inaugurated to help resolve the issues that had brought them to their nearly nine-year strike today. In their letter to President Benigno ‘Noynoy’ Aquino, the union said they were emboldened to nurture hopes after Aquino promised in his inaugural speech that “Today, the leadership that was inured to people’s cries shall end. Where is it written that torment is the main fate of Filipinos?” 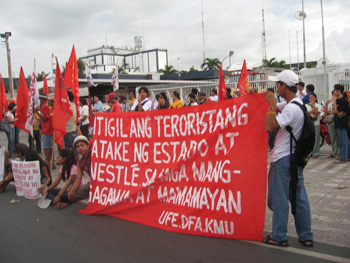 Nestlé workers protesting in front of its plant on Sept. 22.

The UFE representing more than 600 workers of Nestlé said they have been living in torment since they exercised their right to strike in 2002. They had been forced to strike over the issue of retirement benefits that the Nestlé management refused to talk about in their collective bargaining negotiations. The union is armed with a Supreme Court decision saying the issue of retirement benefits should be part of the talking points in the said negotiations.

Over the years as the workers’ strike violently dragged on — wounding hundreds of strikers and hurting their families economically as Nestlé has reportedly retaliated not only with brutality against the strikers, but also with mass layoffs, filing of charges against the strikers, and blacklisting them in the region— the Supreme Court repeatedly affirmed its decision in favour of including the retirement benefits in the CBA negotiation. The high court has even asked Nestlé to go back to the negotiating table with the striking workers.

But instead of obeying the high court order, Nestlé has connived with some of its employees to form “a management union,” the strikers reported. This union, said UFE, has been enjoying state and management support, as borne out by the fact that its petition for certification was swiftly approved by the labor department despite UFE’s presence as the duly recognized union. UFE also charged that the management union has been going to labor hearings escorted by state troops and using Nestlé vehicles.

The UFE is now back to dealing with the labor department, as the office of the president just referred them back to it.

“Our demands are just and legitimate, given the Supreme Court ruling positively on it,” the UFE told Labor Secretary Baldoz in Filipino last week. “But it is the department you are leading now under former labor secretary Patricia Sto. Tomas that was of one those with huge responsibility for the condition we are facing now. In her time, under her orders, the Supreme Court ruling favouring us workers was not respected but rendered ineffective instead,” UFE said in a letter they brought to Baldoz last week.

The striking Nestlé workers requested a talk with Baldoz and the department’s action in immediately resolving their festering issues. Among the strike-related retaliatory problems lodged by the Nestlé management to the unionists were the “numerous criminal cases” filed against them by Nestlé, the Philippine National Police and Nestlé security guards at the Municipal Trial Court of Cabuyao and Regional Trial Court in Biñan. Aside from saddling workers with financial and logistical headaches, these criminal cases worsened their blacklisting in the region as they could not even produce an NBI clearance while job-hunting, the strikers lamented.

The DOLE responded by inviting UFE for a dialogue on Oct 7.

As majority of long-time workers were out of their old jobs at Nestlé, the UFE told Bulatlat that contractualization is currently gaining headway in the Cabuyao plant, which is the core factory in Asia of the world’s biggest food company. UFE research has unearthed a long list of Nestlé accredited contractors or manpower agencies that supply the company with lower-paid workers. The remaining regular employees working at Nestlé plant are also being terminated under “early retirement programs.”

UFE has also previously filed a complaint with the International Labor Organization, which sent a high-level mission late last year to investigate whether the Philippine government is truly complying with international conventions on the right to organize and to strike. (Bulatlat.com)