The meager salary of teachers remains as one of the most pressing concerns confronting Philippine education.

MANILA — Luz Paltino, 48, finds it difficult to imagine how she managed to survive 17 years with a meager salary and poor working conditions as a public school teacher.

“It is common knowledge among Filipinos how public school teachers are underpaid yet overworked,” Paltino, a mathematics and english teacher in Sauyo Elementary School, told Bulatlat.

The meager salary of teachers remains as one of the most pressing concerns confronting Philippine education. Entry-level teachers are receiving only P15,649 ($360) a month under the Salary Standardization Law 3. The Alliance of Concerned Teachers said this is demoralizing to many teachers, who are supposedly considered as ‘professionals’ yet receiving a salary which is way below the P957 ($22.065) daily family living wage in the National Capital Region.

Under such conditions, Paltino and some of her co-teachers borrow money with interest from the Government Service Insurance System or to loansharks to pay for their families’ growing needs such as their children’s tuition. At times, only P3,000 ($69) is left for Paltino after all the deductions, which include her monthly amortization to loans. 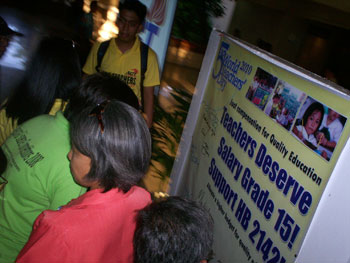 With this, Paltino firmly said, she is supporting House Bill 2142 or “Public School Teachers’ Salary Upgrading Act” as it would not only uplift the quality of living of the next generations of teachers but also boost their morale, hoping they do not have to get through the same fate as hers.

On World Teachers’ Day last October 5, Paltino joined some 300 public school teachers who attended a humble gathering organized by the Alliance of Concerned Teachers and the ACT Teachers Partylist in the House of Representatives. The teachers called for the passage of HB 2142.

HB 2142 is the first bill that neophyte lawmaker ACT Teachers Rep. Antonio L. Tinio authored. “As stated in our party platform and as we said throughout the election campaign period, upgrading of teachers’ salaries is our number one priority,” he said. 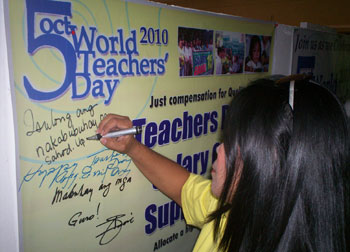 The proposed bill aims to raise the minimum grade level of public school teachers from Salary Grade 11 to 15 or from P15,649 to P24,887 ($360 to $573). Public school teachers in elementary and secondary schools, vocational and technical schools, state universities and colleges, whether funded by the local or national government are covered by this bill.

Once passed, Tinio said teachers’ salaries would be favorably fair compared to similarly-qualified occupations in the government. In a previous interview with Bulatlat, ACT secretary general France Castro said cadets in the Philippine Military Acadamy in Baguio are earning more than teachers at P21,709 ($500) a month.

“We appreciate the gesture,” Castro said, referring to the Teachers’ Day celebration at the PhilSports Arena that was organized by the Department of Education on October 5. She said, however, that the core issues confronting teachers must be prioritized — and that is better wages and humane working conditions.

As of press time, there are about 54 co-authors of HB 2142, varying from district to party-list representatives. “We have different views, some are even contradicting, but when it comes to teachers’ welfare, we are united,” Paranaque district representative Roilo Golez said during the World Teachers’ Day celebration.

“I wish it could be World Teachers’ Day everyday,” Kabataan Partylist rep. Raymond Palatino said, “But what is essential is that we would be able to give the teachers what is due to them.” 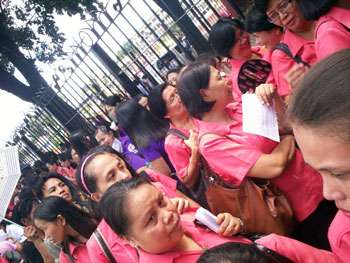 A teacher shows her support for the passage of HB 2142. (Photo by Janess Ann J. Ellao / bulatlat.com)

Gabriela Rep. Luzviminda Ilagan, a former teacher and also a co-author of the bill, said despite the difficulties confronting teachers, “We always do our best.” Emmi de Jesus, also a representative of Gabriela Women’s Party, highlighted that majority of Filipino teachers are women.

Tinio, the bill’s main author, said they still need to get the majority of the 280 members of the House of Representatives. He then urged teachers to lobby with their respective district representatives to support the bill. “We have no illusions that this would be an easy fight,” Tinio said before the teachers, “But, nonetheless, we would continue to fight.” (Bulatlat.com)