For Filipino Workers, Nothing Changed During Aquino’s First 100 Days

Contrary to his oft-repeated promises of “change,” Aquino’s recent US trip revealed to workers that he is simply aping Arroyo’s job-generating strategies.

During Aquino’s first few days as president, he said his handling of the labor dispute in the country’s flag carrier would be the litmus test of his administration’s handling of the country’s labor relations. Given his inaugural promise of ending the people’s suffering and beginning to institute changes, he is expected to reverse at least some of the Arroyo government’s anti-worker legacies. Among the most urgent issues confronting workers, said the labor center Kilusang Mayo Uno (KMU), are wage freeze, which is being implemented for instance via contractualization, flexible work arrangements and regional wage-fixing, and trade union repression. 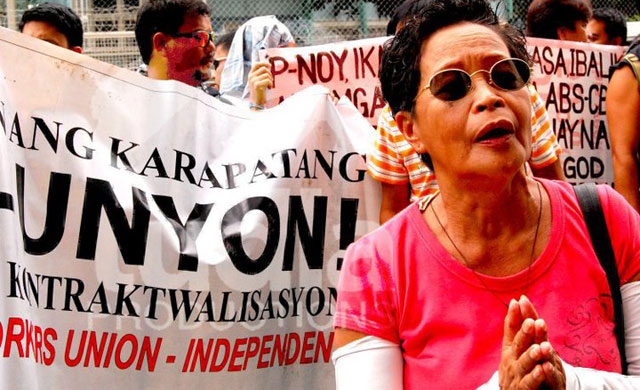 But 100 days into the Aquino presidency, the Filipino workers have not yet heard him issue any warning to the Lucio Tan Group, owner of Philippine Air Lines, who is being accused of violating labor laws. PAL management, according to its flight attendants, has been paying them below minimum wages, not allowing or not paying for their maternity leave and has not been providing equal opportunities.

Until today, too, most workers in PAL are still prevented from having collective bargaining contracts as PAL continues to “play hardball,” lamented the union of flight attendants.

Instead of change, or even a glimmer of it, what labor got from Aquino, so far, is a continuation of the same Arroyo policies on deregulation, both of labor standards and wages, and particularly for PAL, threats that the airline industry will be further deregulated through an open-skies policy, said the KMU in a statement.

The Aquino government has committed to a “policy of minimal intervention in labor disputes,” according to the National Conciliation and Mediation Board. This led to the Aquino government preferring to set up more plant-level grievance machineries to let the workers and their employers settle their problems by themselves, with the government acting only as “mediator” or “arbitrator.” While in itself this is not bad, experiences have taught labor that employers would rather try to get away with violating labor standards and coerce their employees into accepting that, said Tony Pascual, secretary-general of National Federation of Labor Unions (NAFLU-KMU).

In the case of PAL, for instance, President Aquino cannot just keep on telling PAL and the unions to keep talking, “he has to tell the management to respect the employees and their rights to decent wages and equal opportunities,” said Elmer ‘Bong’ Labog of the labor center KMU (Kilusang Mayo Uno or May First Movement).

Ironically, while labor standards and wages are being deregulated, the workers’ efforts to form organizations and act collectively are strictly being regulated.

If workers started exercising their right to strike to press their demands, the Aquino government, like its predecessor Arroyo, has displayed, during his first 100 days, the same predilection for using the power of the labor secretary to assume jurisdiction (AJ) over labor disputes, to immediately force the workers to stop their protest actions, the KMU said in a statement.

Data from DOLE showed that PAL, Aquino’s litmus test, has twice been issued with an AJ— once under Arroyo, last April, and the latest, under Aquino, last week.

The first AJ under Aquino was issued last month, against the notice of strike filed by workers of the country’s largest palm oil plantation and milling company in Agusan del Sur. Despite the AJ, workers in Filipinas Palm Oil have asserted their right to strike. Now on its fifth day, workers told Bulatlat their strike is gaining more support as even the workers’ families have joined the picket.

In PAL the unions planning to go on strike opted to “respect” the DOLE chief’s right to impose AJ, for the time being, they said.

Given President Aquino’s silence against violations of labor rights even by big, profitable companies, and his statements favoring deregulation, organizations of local and migrant Filipino workers have charged that it is not surprising that President Aquino is well-liked and supported by big businesses, including foreign investors. 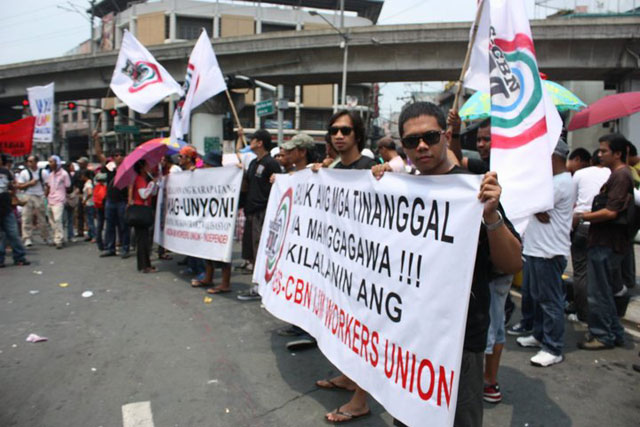 In a survey conducted by the American Chamber of Commerce of the Philippines among its members last month, seven out of 10 expect to increase their profits this year, up from just four out of 10 last year. Three in every four members are satisfied with the “availability of low-cost labor.” Seven out of ten are happy with the “availability of trained personnel” in the country.

“American corporations are obviously referring to severely low wages in the country and vast supply of jobless people to exploit,” said Labog, chairman of KMU (May First Movement).

Aquino was voluble against what he calls as “threats to change,” but he has not been heard to raise even a squeak against violators of workers’ rights, such as in the Lopez-owned ABS-CBN where more than a hundred long-time employees have been terminated since June, the protesting ABS-CBN IJM union members said last week, before they drove to the National Labor Relation Commission for a hearing on their case. These employees were not yet considered regular despite the long years they had worked with the company. In fact, one of the victims of this termination has a labor department decision saying she should have been regarded as regular employee in the company years before. Like Lucio Tan, the Lopezes are perceived as avid supporters and close to President Aquino.