You Are Here: Home → 2010 → October → 9 → For Provincial Buses, Physical Condition of Drivers — and Their Buses — Are Key to Safe Travel

For Provincial Buses, Physical Condition of Drivers — and Their Buses — Are Key to Safe Travel

MANILA — For the bigger bus companies plying the provincial routes to and from the National Capital Region, safety appears important enough that their regular drivers and conductors are given periodic trainings on road and driving safety. The regularity ranges from monthly to quarterly to twice a year. According to some provincial bus drivers and conductors interviewed by Bulatlat, their buses are also usually checked first by their mechanics at the terminal.

Mejia works as a regular bus driver of Victory Liner, one of the bigger bus companies in Luzon with around 1,000 buses and approximately double that number for employees. Of these thousand buses, only 20 are “deluxe” or luxury buses. Assigned to one of the most expensive buses, Mejia is thus one of Victory Liner’s most trusted drivers.

Indeed, in his 17 years of driving for Victory, Mejia has a complete attendance and zero-accident record. He credits that to his health, stamina, concentration, sufficient training, familiarity with the roads, or in summary, to his overall physical fitness for driving. He said he never drinks alcohol even when out of work.

Mejia usually works six days a week, approximately nine hours each day behind the wheel, of which five hours are from Quezon City to Baguio City, another four hours on the return trip. Night trip is usually shorter due to less traffic. 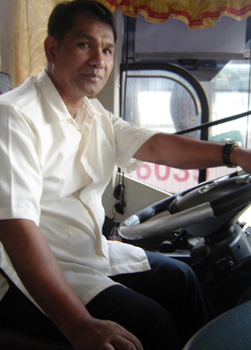 The road condition may also affect the safety of travel, but Mejia insisted the physical condition of the bus driver and of the bus itself determine how the road will be safely dealt with. He opined that the spate of fatal accidents that occurred in Benguet and in Cebu may be largely blamed on the vehicle condition. “Those buses (that figured in the accidents) were already too old,” said Mejia.

“Drivers have families to support,” Mejia said, “it is unlikely they will knowingly feed themselves to danger and cause the accident.”

He estimates that buses should be used for four to five years only. He suspects that the buses that figured in the said accidents are more than 10 years old already. He said Victory Liner phases out or rehabilitates its old vehicles regularly.

Compared to bus drivers in Metro Manila, provincial bus drivers from the bigger bus companies, at least, think they have a slightly better working condition, as well as better running and newer buses.

According to Carlito Rado, 41, driver of a Five Star bus, they do not run old, dilapidated buses. They do not even recap their tires, using only brand new. Asked where the retired buses go, he said the company sells them off.

Five Star, according to Rado’s estimate, has around 4,000 drivers and conductors.

Eric Javier, a bus conductor for south-bound HM Transport, told Bulatlat that although he may work 14 to 15 hours a day if he chooses the what they call as “four-ways option” — two round trips, with each trip lasting at least three hours on normal condition — they at least get a minimum of 30 minutes and sometimes a maximum of two hours’ rest when they stop at their terminal. Metro Manila bus drivers do not get such “luxury” of rest in their long working day of 16 to 18 hours. The buses they drive are also usually older than those used for provincial routes.

Javier told Bulatlat that the job of Metro Manila bus drivers and conductors is far more difficult — they have more stops, for instance, more competition and more turn-over of passengers. He said these may explain why Metro Manila drivers and conductors get a slightly higher percentage of commission compared to them in the provincial routes. But the regular provincial bus employees may still earn a bit more than their counterparts in Metro Manila at the end of the working week. 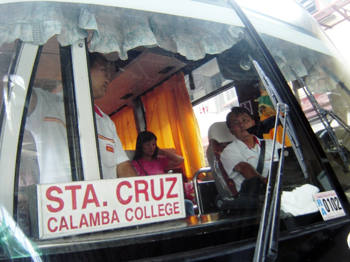 HM Transport has approximately 60 bus units and employs about 200 regular drivers and conductors and others in contractual employment. The drivers’ and conductors’ ordinary working day is spent working only two-ways (or one round trip where a trip lasts three hours), or eight hours. A driver or conductor wishing to earn more can add more trips to his working day. If not, Javier said there are many contractual drivers and conductors without a regular schedule just waiting at their terminals for a chance to work.

Five Star has about the same setup. Their working hours are determined by how much they could bear, for the commission. “It is up to you if you can work 12 hours straight everyday for a week,” said Rado. A bus driver from Cubao to Cabanatuan in Nueva Ecija, Rado explained that they can talk to their personnel at the terminal about their schedules.

“You can report for work if you still want to drive the day after a long working day. If you think you cannot do that, we have relievers,” he said. The latter are drivers without a regular bus, waiting only to be called if the regular drivers failed to work that day or that trip.

He said they also earn differently — there are drivers and conductors who earn on commission basis alone. There are others who have both a commission and daily rate, while others are employed on “per trip” basis only.

As such, even in the relatively more safety-conscious bigger bus companies, there are conditions for some drivers, particularly the non-regular ones, or the regular who aspire to increase his take home pay, to work longer hours and, regardless of how disciplined he is, put his life and that of his passengers in danger. (Bulatlat.com)