The results of two environmental investigative missions belie the declaration of President Benigno S. Aquino III that local communities would decide whether to allow mining operations in their area or not. In South Cotabato, Aquino was reported to have mediated to reverse the decision of the local government disallowing mining in their jurisdiction.

MANILA — Contrary to President Benigno S. Aquino III’s 100th day report, mining projects have been supported and allowed by the national government despite the strong opposition from communities.

Aquino earlier said local communities will decide if they will allow mining projects in their area but results of the two environmental missions led by Kalikasan People’s Network for the Environment (Kalikasan-PNE) revealed otherwise.

The first environmental investigative mission was held Aug. 26 to 28 in Davao Del Sur and Sultan Kudarat, site of the Tampakan Copper-Gold Project. Australian based mining firm Xtrata-Sagittarius Mines Inc. (SMI) owns 62 percent of the project. The second mission was held Sept. 10 to 12 in Cagayan province where various small mining companies are operating in different areas. The results of the two missions were presented in a press conference Oct. 11. 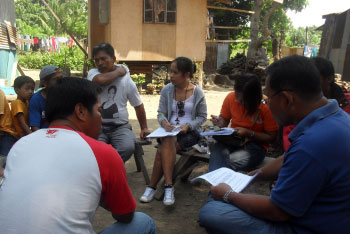 The second mission was held last Sept. 10-12 in Cagayan province where various small scale mining companies are operating in different areas in the province. (Photo courtesy of CEC / bulatlat.com)

“Results of our investigations show those foreign mining corporations and their local partners either deceived or forced the people to accept their mining projects,” Clemente Bautista Jr. of the Kalikasan PNE said.

Baustista said the results of the investigative mission as well as the actions of Aquino clearly reveal that the new administration is just continuing the anti-people and anti-environment mining policy and programs of the past Arroyo administration. “Aquino is gradually showing his true color and demonstrating who his real boss is, that is the foreign mining corporations and not Filipino people as he claimed.”

Deception of the People

The environment groups believe that there is connivance between the Department of Environment and Natural Resources (DENR), the National Commission on Indigenous Peoples (NCIP) and the mining company to persuade the people of Tampakan to favor SMI-XTRATA mining project.

Tampakan is a fourth class municipality in South Cotabato, but it is abundant in natural resources. Its copper and gold deposits are one of the largest underdeveloped reserves in the world. It has an estimated resource base totaling 2.4 billion metric tons at a grade 0.6 percent of copper and 0.2 grams per ton gold. But what the community lacks are basic social services for the people of Tampakan. 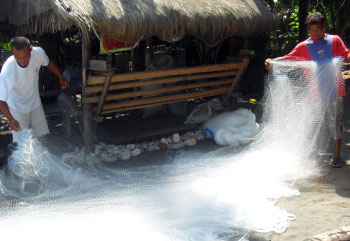 Majority of Cagayan Valley’s population are farmers and fisherman, only 5-10 percent of the population are skilled and professionals. (Photo courtesy of CEC / bulatlat.com)

Pia Malayao, spokesperson of Kalipunan ng mga Katutubong Mamamayan ng Pilipinas (Kamp) and member of the team, said local residents were made to believe that the mining company would provide their much needed social services.

“In Sitio Lam-alis and Lam-alos in barangay Datal Blao, Columbio, Sultan Kudarat where there are 170 families, there is no health center and only one midwife is available for them. There are no facilities for better teaching, no well-built roads,” Malayao added.

“The common perception of the B’laan community, as they were told by the mining company, is that they would not be affected by the operations. The company even promised to provide scholarships, livelihood programs and all they need for their development,” said Malayao.

She added that “these bribes being given by the company and its failure to disclose the possible negative impact and other information about their operations violate the principles of the Free, Informed and Prior Consent (FPIC).” The FPIC needs to be obtained by the mining company before the start of any project.