You Are Here: Home → 2010 → October → 23 → Another Morong 43 Detainee Placed Under Hospital Detention After Giving Birth

Another Morong 43 Detainee Placed Under Hospital Detention After Giving Birth

“We have been detained for so long. There is no evidence against us and the President has acknowledged that, why not set us free?” said Mercy Castro, who just gave birth to her second child.

Mercy was brought to the Philippine General Hospital on Oct. 13, five days before her scheduled caesarian operation on Oct. 18. She named the baby Criselda, with the nickname Selda, which means prison.

Mercy is one of the 43 health workers who were arrested while conducting a training in Morong, Rizal on Feb. 6. Collectively dubbed as the Morong 43, they were charged with illegal possession of firearms and explosives. They were detained at Camp Capinpin in Tanay, Rizal before they were transferred to a detention facility at Camp Bagong Diwa in Bicutan. Mercy is the second to give birth while in detention. Carina Judilyn Oliveros gave birth to her first baby in July. 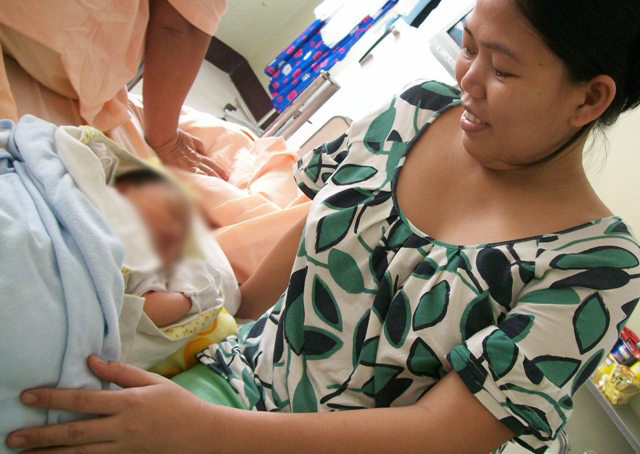 Like Judilyn, Mercy was also handcuffed by prison guards from the Bureau of Jail Management and Penology (BJMP) while being brought to the PGH. “They were asking me if I have a handkerchief to cover my handcuffs. Why would I cover it? I am not ashamed,” she told Bulatlat.

During her pregnancy, Mercy had only two pre-natal check-ups. “My three other scheduled pre-natal check-ups did not push through despite the necessary court orders. The BJMP said they could not provide prison guards to escort me during the check ups,” Mercy told Bulatlat.

Mercy had a delicate pregnancy because of her asthma. “My last asthma attack was in 2005 but when we were transferred to Camp Bagong Diwa, it has been triggered again. Our detention cell was so narrow and so humid, if one inmate got colds or cough, the virus spreads to all of us.”

Mercy and Judilyn share a room at the seventh floor of the PGH. The court granted the hospital detention of Judilyn for three months to enable her to breastfeed her baby son.

While Judilyn said she was delighted now that she has company, she hopes their release would be soon.

“If the mutineers were given amnesty and would be freed anytime, we should also be released. In the first place, we are not criminals. We did not carry guns like they did,” said Mercy.

“What is he waiting for? It’s all in his hands,” said Mercy. When asked by reporters, Aquino said he is leaving the Morong 43 case to the courts to decide.

“We have been detained for so long. There is no evidence against us and the President has acknowledged that, why not set us free?” said Mercy.

Both mothers have pending petitions seeking to extend their hospital detention. Mercy is asking for six months while Judilyn wants another three months. Judilyn’s three-month hospital detention will end on Nov. 30. (Bulatlat.com)