Leaders and representatives of commuters, drivers, workers, transport workers and transport operators including pier-based truckers and bus companies, an association of independent oil companies and a legal expert banded together to oppose the impending toll fee hike.

MANILA— The looming 250-percent toll fee hike in the South Luzon Expressway (SLEx) and varied hikes in other major toll roads have united disparate organizations in vowing to fight for “zero-toll fee increase.” In a press conference held in Quezon City Friday Oct 29, leaders and representatives of commuters, drivers, workers, transport workers and transport operators including pier-based truckers and bus companies, an association of independent oil companies and a legal expert opposed to the toll fee hike, stated why they think the Aquino government should stop the toll fee hike and its unfortunate “domino-effect” of higher prices and reduced income for most Filipinos.

“The Supreme Court decision on the validity of the STOAs (supplemental toll operation agreements) is not yet final. The Toll Regulatory Board (TRB) cannot and must not implement it yet,” said lawyer Ernesto Francisco, one of the petitioners against the toll fee hikes who joined the alliance of commuters, workers and transport operators against the said hikes. Francisco said he will file next week a motion for reconsideration of the high court’s decision that recently gave the go-signal to the dreaded toll fee hikes.

In a joint statement, the groups said they do not expect any positive outcome from the Toll Regulatory Board’s hearings and processes as ordered by the High Court. “In the past,” the groups explained in Filipino, “this agency seems to have favored more the interest of the investors in the tollways than the interests of the people.”

The groups reiterated that the 250-percent toll fee hike in SLEx previously approved by the TRB would be a “huge burden and would create grave damage on the livelihood of people passing by the SLEx and on the entire population in general.” 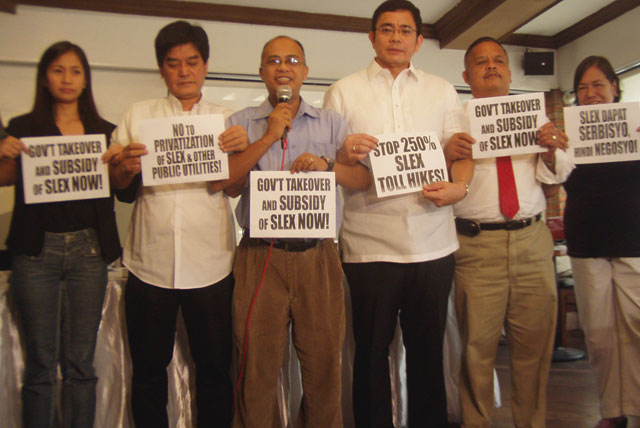 It is not only the people especially the ordinary wage earners who would suffer from the toll fee hikes, said Elvira Medina, president of the National Coalition for Commuters’ Protection, Inc. Aside from the possibility that toll fees in other highways such as the NLEx would also be hiked soon, bringing the adverse impact to a wider section of the population, she said many cargo and passenger vehicles headed to the Visayas and Mindanao islands from Metro Manila also routinely pass by the SLEx.

Medina said many government employees who had taken up the government offer of housing programs in Sta. Rosa, San Pablo and San Pedro, Laguna would be adversely affected, as they commute daily using the SLEx.

“Many employees take a daily commute to Manila from the South, and vice versa,” Medina said. To which Elmer ‘Bong’ Labog, chairman of KMU (May First Movement), readily agreed, saying many workers who are amortizing low-cost housing in the south while working in Metro Manila, or those who have families in Manila but are working and daily commuting to industrial parks in the south, would be hard-put to afford higher transport fares.

Labog warned that a more exorbitant toll fee could also result in inefficiency, as more workers may report for work late for opting to follow the Supreme Court’s advice to use the service roads instead, although these have been neglected by the government. Considering the very meager wage increases– and zero wage increase in Southern Tagalog – an increase in toll fee would further erode the Filipino working people’s pitiable wages, said Labog.

According to Piston, an organization of drivers and operators and a convener of the alliance against toll fee hikes, estimates for new expenses to be incurred by transport and operators’ associations if the toll fee increases were implemented range from P154 ($3.6) per roundtrip for private cars or small public utility vehicles, P232 to P534 ($5 to $12.4) per roundtrip of public buses, depending on their size, and for cargo trucks, at least P524 ($12.2) per round trip, or no less than P2,000 ($46.6) if the fee would be computed based on their cargoes’ weight.

“Our entire leadership is opposed to the toll fee hike in SLEx. We would not consider imposing a fare hike as long as we are fighting and we have hopes that the Supreme Court would reconsider its ruling (on the STOA and 250-percent increase),” Cesar Cainglet, lawyer and executive director of Southern Luzon Bus Operators Association, said.

“As much as possible we are trying to keep our prices down,” added Lorraine Palisoc, representative of Independent Philippine Petroleum Companies Association (IPPCA), to the worrisome domino-effect estimates of the groups opposed to the toll fee hikes. Palisoc said the toll fee increases would result in higher costs of production and transport of petroleum products, which would in turn result in oil price increases.

All these increases would prompt the transport operators to increase fares, while the trucks would increase the price of hauling of goods and materials. “In the end it is the people who will bear the high cost of all these increases, as they will be forced to shoulder the increased cost of consumer products and transportation fares,” said the groups’ statement.

“We vow to oppose this,” said Ricky Papa, chairman of the Alliance of Concerned Truck Owners and Organizations (ACTOO). Their members are largely comprised of pier-based trucking companies. “We are the large cargo trucks you see plying from north and south pier to all points of Luzon, transporting merchandise being unloaded for import or export at the pier. . . The government and the Supreme Court should be more sensitive to the peoples’ complaints,” said Papa.

“We urge people to join and support us, so the Aquino government cannot ignore our calls for zero toll fee hike,” said George San Mateo, secretary-general of Piston.