You Are Here: Home → 2010 → November → 13 → For More Than Half a Century, Justice Remains Elusive to Filipino Comfort Women

For More Than Half a Century, Justice Remains Elusive to Filipino Comfort Women

Lila Pilipina, the organization of Filipino women who were used as sex slaves by the Japanese Imperial Army during World War II, said the Supreme Court decision denying their petition to hold the Japanese government accountable for its crimes against them, which was penned by Associate Justice Mariano del Castillo, was not only plagiarized but was also “twisted.”

MANILA – Narcisa Claveria or Lola Isa, 80, vividly recalls her horrible experience with the Japanese Imperial Army during World War II. Lola Isa is one of the 174 comfort women who bravely went public to demand justice from the Japanese government.

“Lila Pilipina is demanding for an apology from the Japanese government. We want the truth to be written in history that the Japanese Imperial Army committed a horrible crime during the Second World War.” said Rechilda Extremadura executive secretary of Lila Pilipina, adding that rape or sexual slavery is a crime against humanity

Lila Pilipina is an organization of comfort women who survived the Second World War. It was formed in 1994 under the auspices of the women’s group Gabriela. Prior to Lila Pilipina, in July 1992, the Task Force For Comfort Women (TFFCW) was organized by Bagong Alyansang Makabayan (Bayan) together with six women’s organization. The TFFCW through its massive media campaign encouraged victims of sexual slavery during the Japanese occupation to come out and hold the Japanese government accountable.

In 1992, after more than half a century of silence, the women who were repeatedly abused by Japanese soldiers finally came out to tell their stories. Maria Rosa Luna Henson was the first.

There are 174 cases of comfort women that were documented by Lila Pilipina, 65 victims have already died. The remaining 109 lolas are still willing to continue their struggle for justice despite their age. 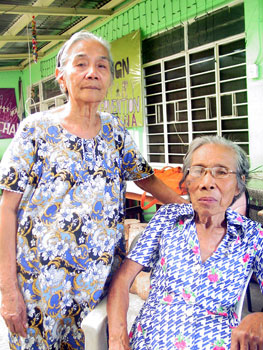 “We would not stop until we achieve justice. We experienced extreme exploitation at the hands of the Japanese during the war,” Lola Isa said tearfully.

Despite their age, Lola Isa and 84-year old Pilar Frias could still remember vividly how they were repeatedly raped by Japanese soldiers.

They were both in their teenage years then when Japanese soldiers began abducting girls, mostly teenagers. Lola Isa, then 14 years old was a Grade 2 student while Lola Pilar was 16, she was in Grade 5.

“There was one empty house in our barrio that was inspected by the Japanese and they suspected that those who lived in that house were guerillas. Then they started to look for the capitan del barrio (village chief) who happened to be my father,” Lola Isa told Bulatlat. They lived in Balintog, Abra.

Then the cruelty began. The Japanese started to peel off the skin of Lola Isa’s father while her mother was being raped by Japanese soldiers. Her two other youngest siblings aged four and five were thrown in the air and were skewered with a bayonet. While trying to help his father, Lola Isa was forcibly pulled by the arm by a Japanese soldier. This dislocated the joints of her left elbow.

Their house was burned down by the Japanese soldiers. Their mother and father and two siblings were buried alive. Her other brothers were also taken by Japanese soldiers and became their slaves. 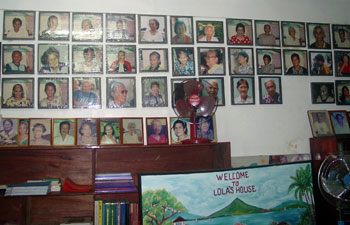 The sexual abuse did not end there. When they evacuated from their house in Sipocot, Camarines Sur to a school together with other families, a group of Japanese soldiers came to the school. Only the girls were left behind in the school as many of the men went on hiding because they were being suspected to be members of the guerilla and would probably get killed. Lola Pilar said there were many guerillas in their place.

Lola Pilar still remembers the Japanese officer who took her to the mountains, “Capt. Kodama took me and three other girls. We were tied by our waist with abaca rope and they took us on their journey looking for guerillas in the mountains.” It was in the mountains while the Japanese were hunting guerillas where we were used as sex slaves,” she said. Fighting back her tears, Lola Pilar said they were too tired not only from walking but also because they were repeatedly raped. She was also brought to the garrison later. She was again repeatedly raped, “When we declined they would beat us up or burn us with cigarettes.”

Lola Isa was reunited with her other siblings, only four of them were alive and one went missing. Lola Isa’s older sister Metria lost her sanity. Lola Pilar was also able to reunite with her whole family. Survival after their dreadful ordeal was also difficult. All their crops were ruined, even the farm animals were dead and supplies were scarce. Lola Isa said that they barely ate. “Before the Japanese came here our life was not difficult. I did not experience hunger because we had plants and other crops within our backyard.”