Carlo “Caloy” Rodriguez, 41, president of the Nagkakaisang Lakas ng Manggawa ng Calamba Water District, was gunned down by motorcycle riding men while he was on his way home from work at about 5:30 p.m., Nov. 12, in front of the Coca Cola plant near the intersection in Halang, Calamba, Laguna.

According to a report by Southern Tagalog Exposure, Rodriguez suffered four gunshot wounds, one on the neck, two at the back and one on his arm. 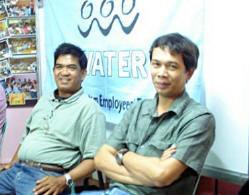 Rodriguez is the second activist killed in the Southern Tagalog region in the span of five days. On Nov. 7, peasant leader Ireneo Rodriguez, not related to Carlo, was shot dead in Balayan, Batangas by masked men riding in a motorcycle.

Carlo Rodriguez is the 22nd victim of extrajudicial killings under the new administration. Rodriguez worked as a meter reader for the Calamba Water District. He was a long time union leader and a member of the Confederation for Unity, Recognition and Advancement of Government Employees (Courage).

“We strongly believe that the killing is politically motivated. Caloy is known to his peers and fellow members of COURAGE as a person who does not have any enemy. He was a genuine union leader and a good public servant,” Ferdinand Gaite, Courage national president said.

Courage said the slain leader was also at the forefront of campaigns on various concerns of state workers in the Southern Luzon. Among the recent activities that he organized in relation to his advocacies are the Southern Luzon-wide forum on government employees’ issues and the assembly of WATER-Southern Luzon.

“We have no doubt that these killings are still part of the counter-insurgency program Oplan Bantay Laya (OBL) which the Aquino government continues to implement,” Glen Malabanan, Karapatan-ST deputy secretary general said.

“Now the new president is treading the same bloody path of his predecessor. Unless his government scraps OBL, we fear that the killings and human rights violations would continue,” Malabanan said. (Bulatlat.com)