Makibaka: Music Inspired by the Struggle for Change

In ‘Makibaka The Album,’ Karl Ramirez offers an hour of progressive music that will appeal to a young, mainstream audience as much it does to an older generation of Filipino activists.

MANILA — Progressive music will forever leave its mark in the history of “original Pilipino music” (OPM).

Who could miss the musical contributions of legendary folk musicians Heber Bartolome, Susan Fernandez, Buklod, and Asin? Or punk bands like The Jerks, Betrayed and Urban Bandits during the ‘80s who, loudly and proudly, criticized the ruling order?

During the ‘90s, people who join rallies would listen to songs by Patatag and Tambisan sa Sining or watch Jess Santiago or Danny Fabella sing their compositions. Many have memorized a song or two from the Rosas ng Digma album.

Fast-forward to 2010 and now comes a new breed of people’s musicians featured in Makibaka (Struggle), a seven-track compilation album consisting of songs for and about the struggle for meaningful change. 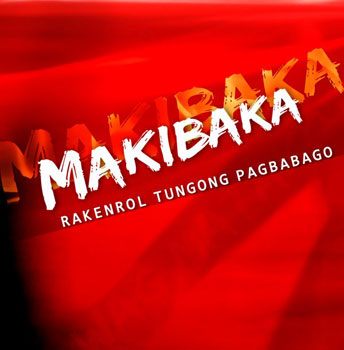 Makibaka the album was first introduced to the public during the commemoration of President Benigno Aquino III’s 100th day in power last Oct. 8, where the song of the same title was performed during the protest action led by progressive groups at Don Chino Roces Bridge (formerly Mendiola) in Manila. The album was officially launched on Nov. 4 through its official website.

The album stayed true to its tagline “Rakenrol Tungong Pagbabago (Rock ‘n Roll Towards Change).” The songs veer away from the usual musical style of protest songs that have folk and marching beats, and instead will give its listeners half an hour of pulsating drums beats and powerful guitar riffs, a few ballad-like tunes, and the Rico Blanco-esque vocals of album producer and chief performer, Karl Ramirez. Makibaka is a rock ‘n roll album that will be greatly appreciated not only by the progressive circle but also by the mainstream audience.

Ramirez, being a young musician weaned on a wide range of modern musical genres, will definitely gain “you rock” points from the young and the young-at-heart listeners. However, Ramirez also paid homage to the roots of Filipino protest music by injecting folk, ethnic beats and mellow guitar tunes, which will surely get a thumbs-up from the not-so-old generation who are not keen on “loud” music.

Ramirez was introduced to music at a very young age. His mother, Divina, gave him piano lessons every after Sunday school, while his father, Mon, a licensed and topnotch engineer and creator of Arkibong Bayan, taught him how to play the guitar. He self-studied the violin when he was in high school. “The skills I learned through the years of learning those three instruments helped a lot when I started arranging music,” Ramirez said.

It was in 1998, while studying in the University of the Philippines in Diliman,  when Ramirez first tried his hand at musical arrangement, mostly musical scores for independently produced film and documentaries. “At that time, even if production was already computer-based, the recorded output was crude and uneven, with a lot of hisses and hums,” said Ramirez. During his stay in UP Diliman, Ramirez became an active member of Ibalon and Agham-Youth. Ramirez’s early works can be found in his online portfolio.

In 2001, Ramirez further improved his craft when he joined BicolXPress , a progressive and independent audiovisual organization in Bicol. “Being immersed with the oppressed and exploited, it became a necessity to do research on cheap, more efficient and convenient means of producing and recording music scores,” Ramirez said. In 2006, Ramirez produced the musical score for BicolXPress’s human rights movie Hustisya! , an instrumental renditon of Tambisan sa Sining’s “Awit ng Pag-asa.”

It was only in 2009, that Ramirez started writing and performing his own songs. One of his first musical creations, “Alagaan ang Kalikasan (Caring for the Environment),” became the official theme for the Citizens’ Disaster Response Center’s segment in Radyo Veritas aired every Friday at 7:30 a.m. Ramirez later produced musical arrangements and accompaniments for the progressive stage musical Makata’y Mandirigma, Mandirigma’y Makata , which he said is a fusion pop and rock orchestra.

At present, Ramirez is a volunteer of the alternative audiovisual group Kodao Productions.

Makibaka consists of songs written mostly and previously recorded by Ramirez for various campaigns and are issue-based or inspired by current, mostly political, events. Ramirez arranged all songs in the album and performed in collaboration with other people’s artists.

Makibaka may also be considered a narrative, which can only be fully appreciated when the songs are played in the order they appear in album.

The album aptly starts with the anthem-like track “Makibaka,” which carries the album’s main message. The song criticizes the Aquino administration for its failure to provide a better life for Filipinos.

The song features the Phrygian-scaled guitar riffs by Tony Palis and supporting vocals by Walkie Miraña. Palis, a member of Kodao Productions’ board of directors, is a seasoned progressive musician behind the songs “Bangon, Maria!” and “Sawang-Sawa na Ako.” Miraña, a member of the People’s Chorale, provided the musical arrangement, along with Ramirez, for the song “Awit ni Laya” used in Makata’y Mandirigma, Mandirigma’y Makata. Both Palis and Miraña are active members of the Concerned Artists of the Philippines (CAP).

This track will surely make listeners sing the lines: “Handa na ba kayo? / Halina at sumama! / Manindigan, makibaka! “the whole day as if it were a mantra. Song highlights include the intro and Palis’s guitar solo starting at 03:27.

The album also features new and improved musical arrangements of “Convergence” and “Alagaan ang Kalikasan (Caring for the Environment).”