MANILA — Private and public sector workers marched from Welcome Rotonda to Mendiola on November 30 to commemorate Bonifacio Day and drum up their demand for a substantial wage hike for all workers nationwide.

Coming from numerous meeting points all over Metro Manila, the rallyists led by the newly revived Koalisyon ng Progresibong Manggagawa at Mamamayan (KPMM) converged for a brief program at the Welcome Rotonda, then marched toward España until they reached Mendiola. 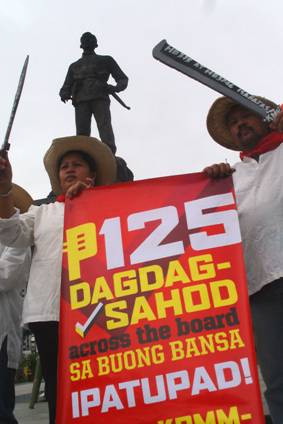 Along the way, the marching protesters, some wearing work uniforms, pasted the street walls with posters bearing their demands for a P125 ($2.84) nationwide legislated wage hike. They stopped marching for a noise barrage whenever they passed a crowded thoroughfare.

The urban poor including those who figured in the deferred demolition in the North Triangle joined the protests. Even as the employed workers from public and private sectors took turns criticizing the Aquino government’s PPP (public-private partnership) as “anti-people and pro-profit”, the urban poor slammed the “costly and deceitful” conditional cash transfer program of the government.

“The Aquino administration is ramming through the people its costly, complicated and ultimately deceitful CCT program, when the simplest, immediate solution is staring it right in the face – allowing for substantial wage increases which the people have long been demanding from the government,” said Carlito Badion, vice-president of Kadamay, an urban poor alliance.

Near the end of program, the protesters burned an image of President Aquino depicted as a monkey who is blind, mute and deaf to the peoples’ cries. (Bulatlat.com)