ALNAPEDKU, the group of kuliglig drivers who protested on Dec. 2, believes that the solution to the kuliglig problem is not an outright ban but regulation. The group is asking the government to recognize them formally as a mode of transport, since social practice has granted them that for years already.

MANILA — When Metro Manila Mayor Alfredo Lim started cracking down on the “kuliglig” (literally cricket) vehicles in Manila, his justification focused largely on the need to ease the much complained about traffic jams in the city. But after the widely documented brutal dispersal of the protesting drivers and their vehicles by the Manila Police District last Dec. 1, the issues of the festering lack of livelihood and lack of a systematically planned public transport system in the country have surfaced to explain why these drivers would go to such lengths to defend their livelihood.

Much like the jeepney, which was invented by Filipinos who tinkered with surplus US Army Jeeps after World War II, the kuliglig is another product of such ingenuity to answer the need for jobs (for its drivers) and additional public transport.

The kuliglig is a three-wheel vehicle powered by a motor engine originally intended for use in a banca (outrigger). Farming communities in the Philippines built the first kuligligs. Farmers would latch a wooden cart with makeshift seats for people or for agricultural supplies onto their engines. It used to be that the kuliglig was just a motorized version of what used to be a carabao-pulled cart; it is called kuliglig because the original kuliglig is shaped like a cricket or kuliglig. Now, in towns and cities across the Philippines, the kuliglig — known as “tricyboat” in the Visayas and Mindanao — resembles more the tricycle. In fact, if not for the bulky engine under the driver’s seat and the engine’s noise, it’s hard to tell the kuliglig from the tricycle.

Because of its size, the kuliglig can easily weave in and out of traffic, just like the tricycle. Because of its engine, which is designed for hard work, it can carry not only passengers but cargo as well. In Manila’s narrow streets, the kuliglig thus found a ready market among commuters in a hurry and shoppers or small business operators laden with materials to and from the shopping mecca that is Divisoria, the port areas, and the narrow Manila streets and alleys connecting schools, hospitals and offices to the relatively wider roads. 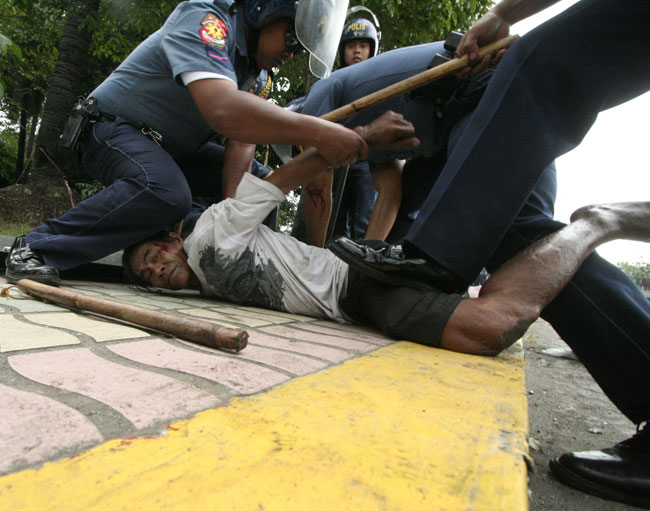 In Metro Manila, the kuliglig has also directly evolved from the pedicab, a bicycle attached to a sidecar. It is not yet known how or who had thought of adapting the practice of the farmers or the fisherfolk in creating the urban version of the kuliglig, but based on information provided by Fernando Picorro, spokesman of the ALNAPEDKU (Alyansa ng mga Nagkakaisang Pedicab at Kuliglig Drivers sa Manila), it can be assumed that the unemployed who migrated to the cities from the countryside may have thought of adapting their farming innovation for use in Manila’s narrow streets.

Cost, of course, is a factor because building a kuliglig is cheaper than buying a motorcycle and a sidecar.

As jobs grew harder to find, the number of kuliglig and pedicab vehicles in Manila has increased through the years that by now they may already number around 10,000, according to Picorro’s estimates. “Someone who has tried this job would urge a friend or a relative who can’t find a job to try it as well,” Picorro said in explaining the growth of the kuliglig .

Regulate Instead of Squelch the Crickets

As a public utility vehicle, kuliglig and pedicabs have no government registration but in the manufacture of kuliglig, which could cost up to P60,000 ($1,365), a driver-operator has to submit his vehicle to an “emission test.”

Pedicabs, meanwhile, could cost anywhere between P30,000 ($682.53) to P38,000 ($864.53). Its drivers are also not yet required to have a license. Such non-registration, or government’s non-recognition, of these vehicles is one of the reasons why Manila came out with EO 16 and 17 banning it especially on major thoroughfares. These vehicles are not supposed to be plying the major roads.

“They counter-flow everywhere. . . They enter even the narrowest of roads,” complained retired Col. Franklin Gacutan, head of Manila Mayor’s Complaint and Action Team, in an interview with ANC last Dec 2.

Gacutan said Mayor Lim had been “kind” to the kuliglig and pedicab drivers, as the ban has been postponed since October, and they have invited them to negotiations. Picorro disputed this, though. “It was not us driver-operators who had been invited to the negotiations, but the fewer large operators,” he said.

He said the pedicab and kuliglig drivers are not opposed to the ban on plying the major thoroughfares per se, but they would like to have permission to cross or pass it by.

Picorro said their group has been longing to talk face-to-face with Mayor Lim, as they also wish to help resolve the problem of traffic and the complaints that some drivers of kuliglig and pedicab do not follow traffic rules and regulations.