“We also condemn those who counter-flow,” said Picorro. He pleaded for understanding since not every driver is organized or educated. He explained that they had formed ALNAPEDKU precisely because they want also to help solve the problem of traffic, check undisciplined drivers, and settle the matter of their ‘non-registration.’

The ALNAPEDKU believes that the solution is not an outright ban but a regulation of the kuliglig and pedicab vehicles. They are therefore asking the government to recognize them formally as a mode of transport, since social practice has granted them that for years already.

The drivers said a clear regulation concerning them may also help them avoid being scalped (or fined “tong) by the police.

ALNAPEDKU said they have not only served the commuters but the police as well who treat them “like gold.” Despite their small operations and because they are not registered, they have turned into steady sources of bribes and fines for the police and local officials, Picorro said. He added that just like in the matter of the government imposing a tax, the drivers had no recourse but to recoup the cost of the “tong” from their customers.

In the aftermath of the violent dispersal of protesting drivers by the Manila police last Wednesday, 16 drivers-operators were arrested and many others more were hurt. Many kuliglig vehicles were run over by government trucks, while young and old drivers were seen on camera being beaten up by the police even when the drivers had already stopped resisting.

The violence was “uncalled for,” the Commission on Human Rights immediately declared. The filing of charges against the 16 arrested and detained also reportedly exceeded the legally required 24 hours. 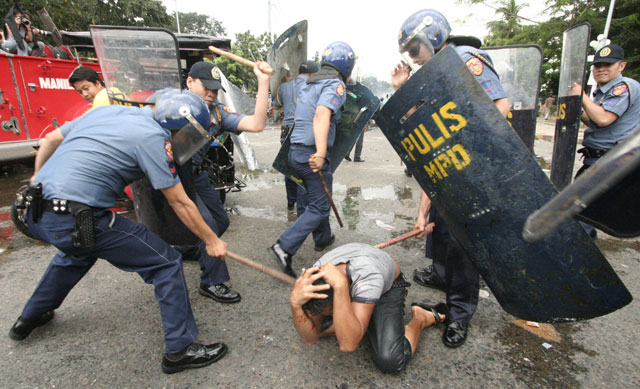 The drivers denounced the violence during the dispersal. (Photo by By Bong Son / Hataw)

The drivers filed cases this Friday against the Manila police district for the brutal breakup of their rally, even as they scrounge for funds to bail out 16 of their detained fellow drivers. Before that, they had filed a petition with the Supreme Court asking for a restraining order against Lim’s EO 16 and 17.

“They have no pity for us and for our families, especially this coming Christmas,” Picorro said in Filipino in a statement. “The local (Manila) government is stealing from us our right to a livelihood, when we are only trying to eke out a decent source of income. We would continue to oppose this order of Mayor Lim.”

As of this writing, Lim is still adamant about banning the kuliglig. The Department of Transportation and Communication has remained silent over the matter of giving the kuliglig and pedicab a formal recognition of its role in public transport, much less in Metro Manila’s mass transport system.

“These drivers and operators are some of our poor fellow citizens who cannot find jobs and livelihood under the present system. They have ventured into driving a kuliglig in order to survive,” said Elmer Labog, chairman of Kilusang Mayo Uno (KMU).

“To this kind of people who suffer poverty and strive to eke out a living through decent means, violence should never ever be the response of the government,” Labog said. He asked the government to provide instead opportunities for people to find jobs and livelihood, as well as avail social services. (Bulatlat.com)