You Are Here: Home → 2010 → December → 8 → Monday Demonstration in Stuttgart in Solidarity with Balao Family and Morong 43

STUTTGART— On the Monday Demonstration in Stuttgart, Germany, 6th of December 2010, we counted again as it was decided last October 2008 in the partnership agreement between the Monday-Demonstration Movement Stuttgart and the Balao family and Cordillera People Alliance (CPA) the days of disappearance of James Balao.

It is the 811th day of the disappearance of James Balao!

Today, at St. Nicholas’ Day, our Mondaydemonstration against the unsocial law of Hartz 4, was visited as well by our Nicholas special. He told us, that he had a long way to ride until meeting us. He came from far away, from the dark woods of the Black Forest full of snow. He told us, that a rubber gang with machine guns accompanied by the secret and military services on behalf of the riches.

The gang robbed all his gifts and donations for the poor old and young. The robber gang told him, that he looks like a terrorist and he accused him for the the unknown address on the sac of St. Nicholas. The rubbers told him, that they do not know the addresses of the poor and it might be, that in his sac is a bomb. 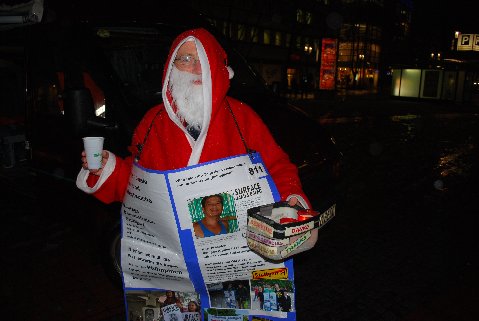 May be he is even part of one of these well known and listed “Serve the people brigade” doing their work all around the world. He told us, that this gang gave him letters of the goverments for the poors with the order to make contributions for the worldwide economic and financial crisis. In these letters, given to the Mondaydemonstration, was written, that for example they don´t get anymore money aid for the heating in wintertime. A family with one child has now 37,00€ less money.

On the other side the oil to heat their rooms is compared with January 2009 + 34% more expensive. The participants of the Monday Demonstration in Stuttgart protested against such sort of “gifts”. They told St.Nicholas, that he should join the MD and that he should support now our demands:

– Smash Hartz 4 and all other unsocial laws
– Peace and freedom, stop the US-leaded so called war on terror even against St. Nicholas
– stop the climate-warming, save our nature
– stop the impunity for attacing human rights
– for a genuine change in the future of mankind. we are the people!

St.Nicholas supported as well the Surface James Balao Partnership with the Cordillera Peoples Alliance and he reminded, that in the Philippines all over the nation the protest actions against the new goverment are very fiery–especially the campaign for the immediate release of the 43 community health workers (Morong 43).

At the 6th of December, is the 10th month of the illegal detention of Morong 43.