Illegally Arrested and Detained for 10 Months, ‘Morong 43’ Are Finally Free

BREAKING NEWS: Relatives and supporters of the political prisoners had been waiting for days for this moment to come, a week after President Benigno S. Aquino III ordered the dropping of charges against them.

CAMP BAGONG DIWA, TAGUIG CITY (Updated: 11:05 pm, Friday) – The so-called Morong 43, or at least most of them, were freed tonight, more than 10 months after they were illegally arrested and jailed by the police and military, which accused them of being communist guerrillas.

The health workers started stepping out of Camp Bagong Diwa in Bicutan Friday night, beginning at 10:52 p.m., after the Regional Trial Court of Morong, Rizal, signed their release papers. Two of them, who had given birth a few weeks ago, were fetched from the Philippine General Hospital tonight to Bicutan so that their release papers could be processed as well.

Relatives and supporters of the political prisoners had been waiting for days for this moment to come, a week after President Benigno S. Aquino III ordered the dropping of charges against them.

On Friday, they trooped to the court in Morong town in Rizal for the court’s release order and then, by nightfall, to Camp Bagong Diwa, where they waited for the authorities to free the detainees who had been jailed there for most of the past 10 months.

At around 4 p.m. Friday, the court in Morong, Rizal, issued a release order for the 43 health workers. It had been an emotional day, with relatives and supporters hugging each other and crying, happy and relieved that their loved ones’ ordeal was going to be over soon.

At 9:45 p.m., Renato Reyes Jr., secretary-general of Bayan, which has been with the families and supporters throughout the campaign to release them, posted on his Twitter account @natoreyes: “Morong43 hope to breathe the fresh air of freedom anytime now.” Reyes and other leaders of progressive groups were in Morong and In Bicutan throughout the day.

At around 10 p.m., a BJMP vehicle carrying the two mothers from the PGH arrived. The crowd shouted “Free all political prisoners!” as the vehicle passed by.

Then, at exactly 10:52 p.m., the detainees started stepping out of the Bureau of Jail Management and Penology’s detention facility in Camp Bagong Diwa.

First to emerge was Delia Ocasla, a 46-year-old community health worker. The crowd outside the BJMP erupted into cheers as Ocasla made her way out. The others are still coming out of the prison facility as of posting time.

By 11 p.m., all of the female detainees — all 23 of them — were released and were marching toward the parking lot of the BJMP to meet their relatives. Renato Reyes of Bayan said the male detainees were still being processed and should be freed before midnight.

For Bulatlat.com’s earlier stories on the Morong 43, click here. 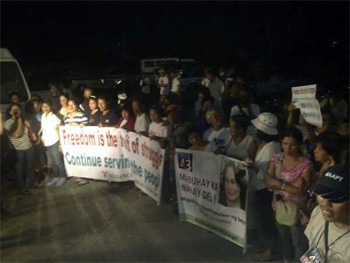 Relatives and supporters outside Camp Bagong Diwa tonight, waiting for the release of the Morong 43. (Photo by Karl Ramirez / Kodao Productions)

Regional Trial Court Judge Gina Cenit-Escoto granted the motion filed by the Department of Justice withdrawing the charges against them. Escoto ordered the Bureau of Jail Management and Penology (BJMP) to release the health workers and directed the Armed Forces of the Philippines (AFP) to dispose of the items obtained from the raid, which included, allegedly, weapons and ammunition that the authorities claimed they had found in the possession of the 43 when they were arrested in Morong on Feb. 6.

For Bulatlat.com’s latest video report on the Morong 43, click here.

Escoto also junked the opposition to the release filed by Alliance for Nationalism and Democracy (ANAD) Rep. Pastor Alcover.

Tension rose when news came that five of the 43, whom the military had earlier taken custody and who have since made public statements accusing the 38 of being communist rebels, filed earlier in the day a motion for arraignment, which was seen as an attempt to block the release. Julius Garcia Matibag, lawyer of the 38, said the motion for the arraignment of the detainees was already moot and would not affect the issuance of the release order.

Metropolitan Trial Court judge Rodrigo Posadas, who handled the charges filed against three of the 43, also granted the motion filed by the justice department to withdraw the cases.

The 43 health workers were arrested on Feb. 6 by around 300 combined elements of police and military. They were charged with illegal possession of firearms and explosives and were branded as members of the New People’s Army (NPA), armed wing of the Communist Party of the Philippines (CPP).