Mercy Castro and Judilyn Oliveros gave birth while in police custody and had been under “hospital arrest.” Their release on Friday signaled not just a new beginning but, most importantly, a continuation of their struggle and commitment to help the poor.

MANILA — While waiting for the Bureau of Jail Management and Penology vehicle that would bring them to Camp Bagong Diwa, the two ‘Morong 43’ mothers, Mercy Castro and Judilyn Oliveros, could not help but be impatient as the primetime television news talked about the usual rush-hour traffic in Metro Manila.

Dr. Julie Caguiat, executive director of the Community Medicine Development Foundation, who was with the two mothers in their hospital room, pointed to a spot on the TV screen where the BJMP vehicle, she joked, must be caught in traffic. “They might arrive tomorrow,” Castro said in jest, while preparing to take a nap to kill time.

Then the BJMP guards knocked and told them to get ready. They were going to Camp Bagong Diwa in Bicutan to join the other Morong 43. After that, after being imprisoned for more than 10 months, they could be home.

“I have mixed feelings. Excited. It is hard to explain it,” Oliveros told Bulatlat.com when asked what she was feeling now that she was only hours away from freedom.

The Morong 43 are the health workers who were arrested on Feb. 6 while conducting a training in Morong, Rizal. They were accused of being members of the New People’s Army, the armed wing of the Communist Party of the Philippines.

Oliveros and Castro were pregnant at that time; they gave birth while they were still in custody on July 22 and October 18, respectively. The police had wanted the two and their newborns to be brought back to jail but the mothers and their supporters protested. The government relented and placed the two under “hospital arrest” at the Philippine General Hospital.

The two Morong 43 mothers had watched the live telecast of President Benigno S. Aquino III on Dec. 10, announcing the dropping of charges against the 43 health workers. “We jumped out of joy,” Castro recalled. “We ran to our guards and told them, ‘Sir, we will be free!’”

Castro added, however, that, knowing how the justice system in the Philippines works, she had expected to remain in jail for quite a while and was surprised that they would be freed before Christmas.

Both were grateful to the supporters of the Morong 43, who, according to Oliveros, did not only dedicate their time but even their health so that they could be freed. Oliveros was referring to the hunger strike staged by the Morong 43 themselves and their supporters to pressure the Aquino government to set them free. 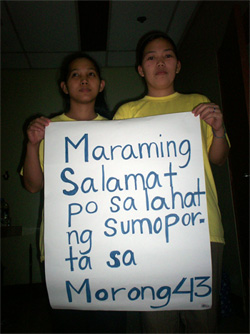 “We should have been released a long time before,” Oliveros said. “There were no evidence against us,” adding that whatever pieces of evidence the authorities had against them were planted. “They can cut out my tongue but I am telling the truth,” she said.

Now that they are released, Castro and Oliveros could not yet decide what to do next. But they would like to spend time with their family first. “I would like to take my baby out. I want him to see that the world is not just the four walls of this hospital room,” Oliveros said.

Oliveros and Castro said that once everything is settled, they would like to go back to being community health workers. “Many need us,” Castro said. “There is nothing wrong with what we are doing. Many people in the community ask for our help because health care is very expensive.”

“We hope that the people would never get tired of supporting (political prisoners) like the health workers,” Castro added. “What we went through could happen to anyone, which is why the struggle of the Morong 43 in fighting for our rights is also the struggle of the Filipino people.”