Apart from ‘Shocking’ 300% Toll-Fee Hike, Philippines Has to Account for Dramatic Jump in SLEX Project Cost

He said the South Luzon Toll Corp. should have taken the possibility of increasing costs into account when it first agreed to the project when it was still pegged at P5.88 billion.

“It’s impossible that the South Luzon Toll Corp. didn’t foresee this. Besides this, it’s a matter of public record that there were substantial delays in the construction of the project.  Finally, for project costs to double in a span of only four years is simply incredible,” he said. “The Commission on Audit should review the South Luzon Toll Corp. and the Toll Regulatory Board’s records.”

SLEX toll fees were raised by more than 200 percent last January 1, an increase many found shocking. The South Luzon Toll Corp. has been trying to justify it by saying that it was already lower by 11.4 percent than the originally targeted hike. The discount will go down to 7 percent in February, then to 4 percent in March, before the full new rate is implemented in April.

Francisco, however, dismisses these attempts to, according to him, diffuse public reaction. “An increase is an increase, whether staggered or imposed in one blow. The public will still be forced to shoulder it,” he said.
“What the public should also know is how on earth the South Luzon Toll Corp. is justifying the increase because that story by itself is a cause for outrage.” 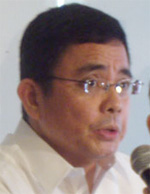 Prior to the Toll Regulatory Board’s go signal for the 300-percent toll fee hike, cause oriented groups led by transport group Piston, Anakpawis Party-List and the alliance Tutol SLEX have already decried the foreign toll contractors’ non-compliance with the contract it signed with the government. They pointed out the lack of transparency in the project workings and questioned the legality of authorizing the South Luzon Toll Corp. to collect tolls.

The accusations of anomalies against the South Luzon Toll Corp. contract have not been settled. Neither has the agency sufficiently complied with its contract with the government in implementing the rehabilitation, construction and operations of the SLEX. Given this, these groups say, why has the Aquino government allowed a toll increase?

In July 2010, Francisco filed a second petition with the Supreme Court to stop the South Luzon Toll Corp. from implementing a P3.02 per kilometer initial increase in the SLEX. In his petition, he said the Toll Regulatory Board’s agreement with SLEX, which provided for periodic increases without public hearings, was “unconstitutional.”

The following month, the SC issued a temporary restraining order against the toll hike, but by October it lifted the said order after it junked Francisco’s first petition and other similar petitions. It also declared the agreement between the SLEX and the Toll Regulatory Board as constitutional.

Despite these legal setbacks, Francisco argued that the South Luzon Toll Corp. and the Toll Regulatory Board should not be allowed to increase toll fees since the SC ruling is not yet final and executory and that his appeal remains unresolved.

Francisco also rued the pending increases in MRT and LRT fares, which he reckoned would amount to at least 10-percent of minimum wage earners’ monthly wages.

“We haven’t yet considered how much the toll fee hikes in the SLEX and the NLEX will affect the prices of commodities and rates of utilities. It’s the domino effect. What’s certain is that it’s not something most working people will be able to easily adjust to. Add the MRT and LRT fare hikes and that’s serious punishment for the public,” he said.

In the meantime, Francisco has all but given up hope in the legislature, saying that the House of Representatives and the Senate have mostly failed the Filipino people when it came to standing up against unfair and illegal toll-fee increases and erroneous tax measures the government and its private sector partners have imposed through the years.

“Review all the controversial issues, all the big scandals that have affected the public welfare that reached the level of the Senate or the Congress. What happened to all the congressional or senatorial investigations? They were all left hanging, unsettled,” he pointed out.

Francisco, however, said that despite his lack of faith in the legislature to address the anomalies in the country’s road toll system, it was still commendable that there were still lawmakers and groups who were active in exposing and opposing them.

Recently, Anakpawis Rep. Rafael Mariano filed House Resolution No. 677 directing the House Committee on Transportation to delve into the Toll Regulatory Board’s approval of the 300-percent toll hike. Anakpawis and the Kilusang Mayo Uno have also launched protest actions against what they deem as an anti-poor imposition.