MANILA — Employees of the Commission on Elections (Comelec) led by their union, the Alliance of Comelec Employees in Service (ACES), urged the Aquino government on Friday to address the needs of its rank and file and implement a P6,000 across-the-board wage increase for all government employees nationwide.

The Comelec employees echoed the call issued last Monday by the Confederation for Unity, Recognition and Advancement of Government Employees (Courage) for a P6,000 wage increase for state workers to curb the recent spike in prices and to “address the long overdue neglect in the salaries of the lowest paid employee or those who need the increase more.”

The ACES president asserted that the worsening price crisis in the country has burdened the thousands of Comelec employees nationwide. Pama said the lowest paid employee in the Comelec gets a monthly pay of P7,575. The actual amount that employees receive, however, is much smaller because of numerous mandatory deductions, among them contributions to the Government Service Insurance System (GSIS), the Home Development Mutual Fund (HDMF), more commonly known as the Pag-IBIG fund, and others. 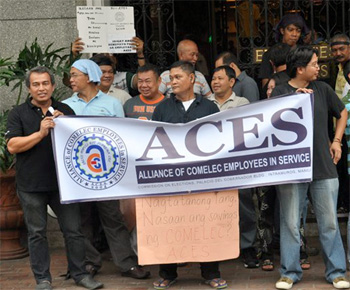 “Because of our already meager salaries, Comelec workers often turn to our credit union for loans. Worse, some of us have to pawn our ATM cards to loan sharks just to make ends meet!” Pama said.

The Comelec employees said President Aquino should emulate his mother, the late former president Cory whom they said “championed the cause of the workers in the public sector during her term.”

Pama said it was Cory who issued Executive Order 180 in 1987 that laid down the guidelines for the exercise of the right to organize of government employees.

In the meantime, the Comelec employees have also given their say on the issue of appointment of the next chairman and commissioners of the poll body.

Comelec chairman Jose A.R. Melo’s appointment is set to expire on January 31, 2010 after he publicly announced that he will no longer serve the remaining portion of his term. Meanwhile, Commissioners Gregorio Y. Larrazabal and Nicodemo Ferrer’s appointment will end on February 2, 2010. The retirement of Melo and the two Commissioners will result in three vacancies in the seven-member collegial body.

The union said that the incoming chairman and commissioners must have “Integrity, knowledge, credibility, independence and pro-worker credentials.” “They must be God fearing, have an impeccable character and the heart for the rank and file employees of the Comelec.”

“We want a Comelec chairman who is truly independent and not in any way beholden to anyone,” said Pama. ”The next set of commissioners should also be insiders who are knowledgeable of the inner workings of the Commission.”

She added that the agency should have a head that respects the democratic rights of employees to organize and to negotiate with management on matters concerning the welfare of the Comelec employees nationwide.

Finally, Pama said the incoming poll chief and commissioners must posses the capability to solve long-standing issues and problems of the Comelec rank and file regarding the Government Services Insurance System (GSIS).