In a major breakthrough, Manila and the National Democratic Front of the Philippines agreed to resume the formal negotiations in February and a possible ceasefire the same month. The government panel also agreed to release several political prisoners, even as it acknowledges that the NDFP, contrary to what the US government and the Philippine military have been saying, “is not a terrorist organization.”

By MACEL INGLES in Oslo
and RONALYN V. OLEA in Manila
Bulatlat.com

Chief government negotiator Alexander Padilla, speaking to reporters in Oslo where the informal talks were held, said the Aquino government is looking at a possible but realistic timeframe for the peace process and that he sees “a peace agreement signed in three years.”

Padilla said the best possibilities for peace is during the Aquino presidency and that he, Padilla, does not want “to burden the next administration with the peace process.”

In a joint communiqué released Jan. 18, the two panels announced that the GPH panel agreed to work for the “expeditious release” of detained NDFP consultants and other persons protected under the Joint Agreement on Safety and Immunity Guarantees (Jasig).

At the preliminary talks in Oslo, the NDFP raised the GPH’s violations of the Jasig and the Comprehensive Agreement on Respect for Human Rights and International Humanitarian Law (CARHRIHL). Jasig guarantees the safety of all consultants and personnel of both negotiating panels. 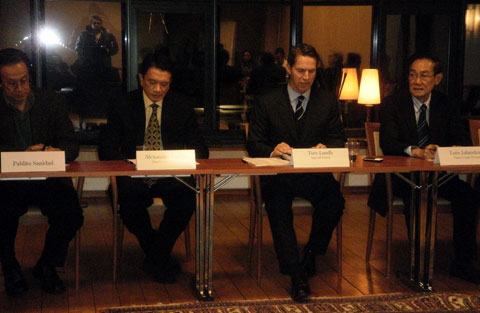 The NDFP’s position nearly stalled the informal talks after both parties disagreed on the fate of the three NDF consultants with pending warrants of arrests and the 14 other NDFP duly accredited and Jasig-protected persons arrested by the Philippine government since Manila unilaterally suspended the Jasig in 2004.

The impasse was only broken when the Philippine government agreed to work on the demand of the NDFP within the first and second rounds of the formal talks. The NDF expects to have three of their consultants facing charges to join their panel in the next round of negotiations in February.

The joint communiqué was released after the preliminary talks of the two panels held on Jan. 14 to 18 in Oslo, Norway, facilitated by the Royal Norwegian Government. The decision to re-start the formal talks was announced by Norwegian Special Envoy to the Peace Talks, Ambassador Ture Lundh, at a press conference at Holmen Fjordhotel in Asker, about 20 kilometers from Oslo.

“I am impressed by the two panel delegations as they have proved to us as third party facilitator that they really have a desire for the peace process,” Lundh said in the press conference.

In a statement posted at the Office of the Presidential Adviser on Peace Process, GPH panel chairman Alexander Padilla said that both panels also agreed to work for the possibility of a ceasefire from Feb. 15 to 21, 2011, to mark the resumption of the formal talks.

“To avoid unwarranted disruptions of the negotiations, the parties also established sidetable mechanisms to review and address procedural and non-substantive issues such as Jasig implementation, the release of alleged political prisoners (APOs), and confidence-building and goodwill measures,” the government panel said in a statement.

Padilla acknowledged that both panels have been through “tough negotiations” but said that they look forward to even more “tough discussions,” saying that the next round will focus on “building a just and enduring peace.”

Padilla said the resumption of the formal negotiations with the NDFP will focus on the remaining substantive agenda set forth by the Hague Joint Declaration. These include: socio-economic reforms, political and constitutional reforms, and end of hostilities and disposition of forces. The first agenda was the CARHRIHL, which signed by both panels in 1999.

“We would not be negotiating with them if we consider them as terrorists,” Padilla said.

For his part, Luis Jalandoni, chairman of the NDFP panel, said the breakthrough “is an important endeavor to try a achieve a just and lasting peace through a negotiated settlement” but they also try to bring “the interest and concern of the workers, peasants, NDFP consultants, political prisoners in the negotiating table as well as the big issues of human rights, socio-economic reforms including land reform.”

Jalandoni also conceded that the negotiations had been tough, saying that both parties had “to deal with diverse positions and conflicting stances but that the NDFP does not “underestimate the difficulties but (is) willing to look at the opportunities and challenges. “

Both panels also agreed to reaffirm all previous signed agreements.