This is what seems to be the game plan of farmers groups as their leaders submitted Friday two letters of appeal to the Supreme Court and the Department of Justice on separate agrarian conflict cases.

To the Supreme Court, they sent a letter addressed to Chief Justice Renato Corona appealing for the speedy resolution of the Hacienda Luisita case. To the Justice department, it was a letter to secretary Leila de Lima seeking the reopening of the 24-year-old Mendiola Massacre case. 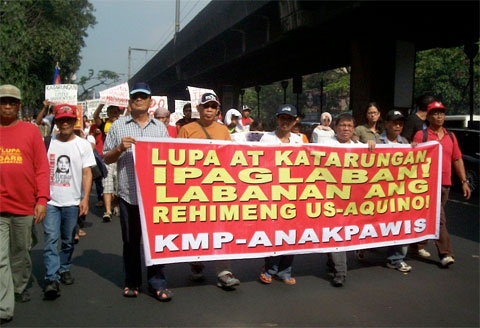 In the letter addressed to Corona, the farmers groups said that the Stock Distribution Option (SDO) issue connected to the Hacienda Luisita case was filed before the High Court more than four years ago. Ambala officials had also sent two previous letters of appeal praying for the SC to decide on the case at the soonest possible time.

“The letters were complementary to the several urgent motions for the immediate resolution of the case filed by our lawyer, Jobert Ilarde-Pahilga. To these days, all our letters have been left unanswered. In the meantime, it has been more than five months since the SC welcomed oral arguments to clarify matters pertinent to the SDO. Laymen as we are, we see that there are no more issues left to be controverted to prevent the SC from issuing a decision,” they said.

In immediate response to the farmers’ appeal regarding the Mendiola Massacre, de Lima asked on Friday the Task Force on Extra-judicial Killings to look into the case and determine if the request to look into the incident warrants an investigation.

Communications and Strategic Planning Secretary Ricky Carandang, in the meantime, said Malacañang doesn’t see any need to reopen the case. He said there is “no practical point” in reopening investigations as it has already been resolved.

At least 100 members of the Philippine National Police (PNP) prevented the main body of protestors led by the farmers groups from coming close to the SC and the DOJ offices in Padre Faura. Peasant leaders, among them the KMP’s Willie Marbella, Kasama-TK’s Antonio Flores and Ambala’s Rodel Uma instead walked to the two offices escorted by police. 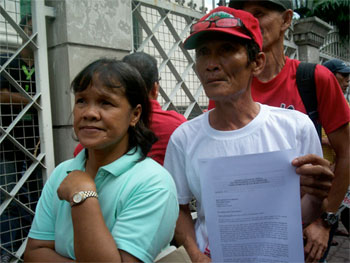 The peasants showing a copy of the letter they sent to the SC. (Photo by Ina Alleco R. Silverio / bulatlat.com)

Murmurs at the Supreme Court

AMGL chairman Joseph Canlas said there had been murmurs that the High Court was all set to release a decision on the Luisita case, and that Malacañang will not like the decision “It doesn’t matter so much if President Aquino agrees with the decision or not, just so that the SC lays down a ruling that’s favorable to the farm workers and their families,” Canlas said. “They have suffered 16 long years under the SDO system, and four years since they lost their jobs when the management closed operations in 2004. The SC should do all in its power to put an end to this suffering.”

Speaking to members of the Foreign Correspondents Association of the Philippines (FOCAP) recently, Corona said the decision will soon be released. He, however, refused to elaborate. Despite the cryptic announcement, he went on to take a swipe against what he called “a campaign against the SC” being led by the Aquino administration.

Recent SC decisions have been contrary to Malacañang’s positions, including the High Court’s stand that the proposed Truth Commission to investigate crimes of corruption committed during the previous administration of Gloria Macapagal-Arroyo was unconstitutional.

“The court does not wield the power of the sword, nor does it have the power of the purse. But it has the power to interpret the Constitution. I mention this in light of recent events. A propaganda war was unleashed on recent judgments,” said Corona.

In the meantime, the signatories in the letter addressed to de Lima said that that the DOJ can be an instrument of justice and truth if it sides with the oppressed and the victims of injustice.