They were joined by leaders of Pamalakaya-Pilipinas, Unyon ng mga Manggagawa sa Agrikultura, Amihan peasant federation, Anakpawis Partylist and NNARA-Youth in condemning “the Aquino government’s bent toward continuing the military campaign of extrajudicial killings and abductions against farmers and members of progressive people’s organizations.”

Antonio Flores, KMP spokesman and Tanggol Magsasaka convener said President Aquino is doing what his predecessor Gloria Macapagal-Arroyo and what his own mother the late former president Cory Aquino did – implement a military campaign that seeks to silence voices of dissent and stop farmers from fighting for their right to own the land they till. 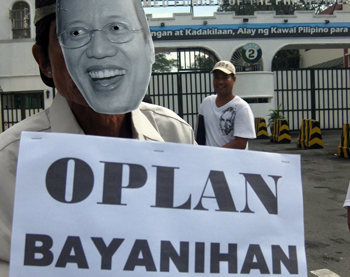 “And to think that Noynoy Aquino calls this counter-insurgency program ‘Bayanihan.’ True bayanihan is a tradition much valued by Filipinos, connoting solidarity, fraternity and good will. Aquino’s version of bayanihan means death and destruction for farmers. Continuous militarization has driven hundreds of thousands of farmers and fisherfolk from their communities, and now it would be called bayanihan. It’s an outrage,” he said.

Flores said Oplan Bayanihan is no less than a continuation of Oplan Bantay Laya. “Like the military campaign that preceded it, its primary objective is to repress people’s movements such as the peasant struggle for genuine land reform. It aims to protect the economic and political interests of big landlords, compradors and foreign monopoly,” he said.

The new Oplan has eight main sections: Purpose, Strategic Environment, National Strategic Guidance, National Defense Strategy, Strategic Assumptions, AFP Mission for Internal Peace and Security, AFP Strategy for Internal Peace and Security and Conclusion. It uses concepts lifted from the US Counter-Insurgency Guide of 2009 formulated by the US Inter-agency Counter-Insurgency Initiative which includes the US Department of Defense, US State Department and the USAID.

The groups also condemned the Aquino government’s refusal to put an end to extrajudicial killings targeting political activists. Since Aquino was sworn in as the country’s fifteenth president, 13 farmers have fallen victim to extrajudicial killings, two victims of enforced disappearance, and five others have been charged with criminal acts and thrown in jail. Pascual Guevarra, the first peasant victim was killed on July 9 while Ireneo Rodriguez of KMP Batangas was killed on November 9. The other victims who were killed in the following weeks were from from Rizal, Masbate, Davao City and Compostela Valley.

In the meantime, the farmers groups are also demanding the immediate release of Dario Tomada, former peasant leader of a local association of KMP in Eastern Visayas, Darwin Liwag of KMP Laguna, Esmeraldo Bardon, a member based in Camarines Norte, Felicidad Caparal of UMA.

Tomada was arrested July 22, three weeks after Aquino’s inauguration,. He was charged with multiple murder in Inopacan, Leyte. He is now detained at the Manila City Jail.

Caparal, an agri-workers organizer, continues to be detained in Bubon Provincial Jail in Northern Samar. She was arrested on January 27, 2009 at Lavezares town as she was returning home to care for her ill mother. She was accused of being a member of the New People’s Army and involved in an ambuscade.

Liwag who is also the vice-chair of KMP Southern Tagalog and a member of the KMP National Council was arrested October 5 in Lumban, Laguna. He was in the company of other KMP members when he was illegally arrested at a checkpoint. He said he suffered torture at the hands of the arresting agents.

Flores said Aquino’s pronouncements that he is a president for social change does not have any manifestation in reality. “As the days pass by, it is becoming evident even to those who voted for him during the May 2010 elections that Aquino ran for president to protect his family’s interest in Hacienda Luisita, and that he is not for pro-poor reforms, neither is he an agent of peace.”

According to Flores, the Aquino government is already positioning the military to crush peasant actions and undermine organizations advocating genuine agrarian reform. He said there were already reports coming from various farmer groups that more military detachments are being established in areas where peasant associations and campaigns are very strong. He said farmers from Bgy. San Rafael in Rodriguez, Rizal reported that two American soldiers joined a military operation climbing the mountain of Parawagan.

In Brgy. Tungkong Mangga, San Jose Del Monte, Bulacan, elements of the PNP Provincial Mobile Group have reportedly begun training exercises on Araneta Group -controlled lands, but their operations expanded to the lands of local farmers. “There is also a sudden increase in the number of military detachments in Eastern Visayan provinces. In Mindanao, the military continues its destructive operations in Paquibato District, Davao City, as well as in Marihatag town, Surigao del Sur,” Flores said.

KMP and its allied groups are set to conduct a vigil in front of the Department of Agrarian Reform (DAR) the evening ofJanuary 20 before proceeding to the Department of Justice in Manila in the morning of Jan.21 to press for the reopening of the 24-year old Mendiola Massacre case.