“According to the affidavits made by members of the 19th IB, there were 38 soldiers involved in the combat operation in Kanganga, Leyte, that led to the death of the three. At the same time, however, they claimed that only one squad composed of eight men and headed by CPL Marlon Mores fired at the NPA. All these eight men submitted affidavits, but the rest of them, 30 more soldiers, didn’t,” she said.

Of the eight members of the squad who admittedly opened fire, only two claimed to have personally seen the NPA. The others, including Mores, admitted that they did not actually see any armed men before they opened fire and that they simply relied on the alleged presence of the armed men supposedly sighted by their lead scout.

“The question then is this: Can these testimonies take precedence over the testimonies of survivors of the massacre, individuals who would have been victims themselves? What about the ballistic evidence, the forensic evidence?” Ursua pointed out. 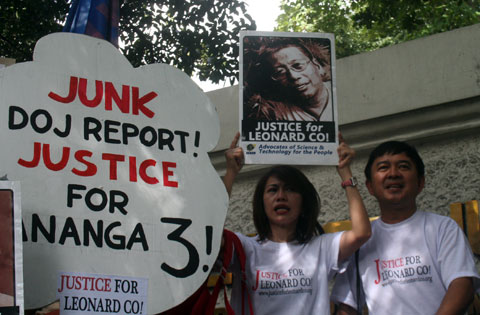 The family of Leonard Co and their lawyer, Evalyn Ursua, filed before DOj Secretary Leila de Lima a request for a new investigation into the botanist’ death. (Photo by Ina Alleco R. Silverio / bulatlat.com)

Two of the survivors, Ronino Gibe and Policarpio Balute, have already stated that they were gathered around and inspecting a tree when they were suddenly fired at, from the back, and completely taken by surprise. Gibe is a licensed forester and contractual employee of the Energy Development Corporation and Balute is a member of the Tongonan Farmers Association. Both were with Co during the shooting incident.

“It is our understanding that these hearsay and unrealiable statements about the presence of NPA can’t give credence to the claim that the three victims were killed in a crossfire. What is evident is that five unarmed civilians were fired upon by soldiers.”

Co’s 85-year old father said that he was angered by the DOJ panel’s exoneration of the military. He also dismissed what he said was “malicious” opinions that he and the rest of the family were being manipulated to pursue charges against the military.

Prof. Co’s wife Glenda was more adamant even as her own voice broke as she spoke.

“We have faith in the credibility of the testimonies of the survivors that it was the military that killed my husband and his companions. They were the ones there, and they themselves were almost killed. They insist that there were no other armed individuals there but the soldiers. They didn’t see any NPA,” she said.

During the press briefing that came before the motion filing, Co’s eight-year-old daughter seemed oblivious to the proceedings and their import. She smiled as she watched the reporters and cameramen ask her mother and grandparents questions, she watched with interest as the cameras rolled and the flashbulbs went off.

Mrs. Co said she and her husband are nowhere near getting over what happened to their son. It was the support of various groups and individuals, she said, that helped make them stronger and determined to pursue justice for their Leonard who was the eldest and only male child of their six children.