MANILA – Prices of everything are rising and many Filipinos are worried over where they would get the money to live decently. But as can be expected, the economic crisis is neither a backdrop nor a given in the newest television fantasy series that now regale primetime viewers in GMA-7’s Tele-Babad stories.

Machete, the macho fantasy penned by Pablo S. Gomez that first came out in weekly komiks more than a decade ago and later on spawned two different blockbuster movies in the ’90s, has once again come alive.

Machete has been credited for launching the careers of actors Cesar Montano and Gardo Versoza. Between the two, Machete’s reputation has ranged from the “siete-pulgada” naughty talks in gay bars to the supposedly artistic wet dreams of otherwise respectable ladies. Note that there is little to none in terms of Ifugao reaction to the character. 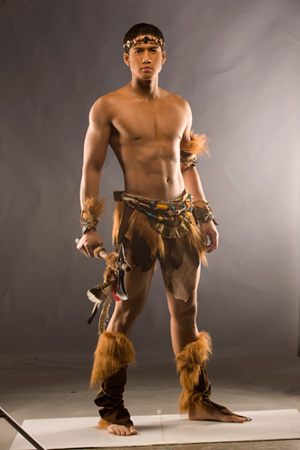 Aljur Abrenica, a decorated Startstruck Hunk in the same TV network, is the latest Machete to come out on camera — in a jazzed-up G-string. Yes, he knows that Machete is an Ifugao warrior. Yes, he’s proud of the Ifugao, “one of our true ancestors,” he told us.

What kind of problems will his Ifugao warrior character wrestle with? Ditch the likelihood of his battling the incursions of huge mining or logging companies, to the detriment of their tribes. This Ifugao in particular is a life-size wood sculpture who comes alive at midnight, summoned by a woman’s fervent fantasy.

In a way, Machete is a sort of a loose relative, though more upscale and artistic, of the Baguio City’s infamous “barrel man” and Ifugao hunter.

But this latest, primetime Machete will not be wearing the exact G-string that Ifugaos use, in consideration of the general-patronage audience. “We will be careful with sex scenes,” Aljur also said last week.

Still, Aljur prepared hard for the role — he studied Wushu and did workouts about four times a week, observed a special diet to sculpt his muscles and to do justice to two female artists’ fantasies. These artists, we were told, will vie for his love in this newest Machete.

One of the “modern twists” is the addition of another woman in the lead role. The komiks and the movie versions all had had only one lead character vying for Machete’s love.

GMA-7’s Machete is set to run for eight weeks starting on Jan. 24. During the period, viewers will first see him in his old life, when he’s an Ifugao warrior deeply smitten with an Ifugao woman who unfortunately came from an “enemy tribe.” This woman is Aginaya, played by Bela Padilla. Aginaya and Machete promised to sizzle in their forbidden relationship, which would end in tragedy. Past forward to today, Aginaya lives as Rosella, a sketch artist with a skin disease. 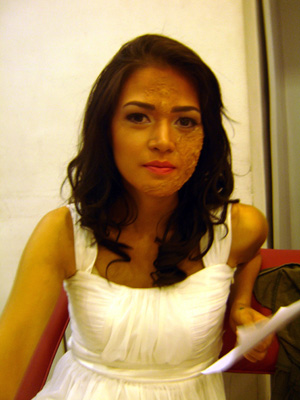 She would sketch Machete, and her sketches would be the studies for a life-size sculpture to be done by another female artist named Marla, played by Ryza Cenon. In truth, the sculpture was done by no other than National Artist and “Father of Philippine Modern Sculpture” Napoleon Abueva and his team of artists, including his son Lawin.

Almost all of the young lead characters claim to being nervous at playing such daring roles in Machete. But Aljur leads the pack in vowing to do his best to breathe life to the Ifugao warrior, or to the fabulous wooden statue. “I will do everything,” he told us with a clenched fist and a slight gnashing of teeth.

And so, while their viewers are wringing their hands over rising fares and rising prices of food stuff, the three actors promised at least eight weeks of primetime escape to a fantasy world, where the problem mainly revolves only on who of the two gorgeous artists would win over the Ifugao hunk.

It would be interesting how a centuries-old Ifugao will fare in modern Manila; how an Aginaya who lost her boyfriend to tribal war will fight for him in modern times given her skin disease, resulting shyness and all; and how the sculptor will fight to keep her sculpture — whether alive or as a statue — firmly with her.

“Of course in the end I’d wish it’ll be Machete and me,” Bela Padilla said. After all, she reasoned, theirs is a “love that has endured centuries.” And wholesale logging and countless wars. (As wood statue, by the way, Machete was molded out of a tree in the Cordilleras, where he was originally felled years before.)

The stars would not tell us who will end up with whom this early. They just promised to do their best. And meanwhile, sculptures of barrel men and Ifugao hunters could be selling slightly more briskly in the next few weeks.