Bt (Bacillus Thuringiensis) is a toxin-producing germ which, when embedded into the eggplant, makes it resistant to the insect. The Bt eggplant is a GMO designed to produce an insecticide that is present in the whole plant and concentrated in the eggplant itself. Bt eggplant was introduced for field testing in the Philippines by Maharastra Hybrid Seeds Company Ltd (Mahyco) in a few areas, but this 2011, it’s being introduced to the commercial market.

Mahyco is affiliated with Monsanto, the same US-based biotech company that introduced Bt corn in the country and is foremost proponent of GMO.

Casiño said the Department of Agriculture should not have allowed Bt eggplant field trials in different sites across the country in the drive to commercialize it this year. Through the DA, the Bureau of Plant Industry has been given the go signal to conduct Bt eggplant field trials in Sta. Maria, Pangasinan; Bae, Laguna; Pili, Camarines Sur; Baybay, Leyte; Sta. Barbara, Iloilo; UP Mindanao, Davao City; and Kabacan, North Cotabato.

Casino said that it was good that residents and local governments were putting up a fight against the field trials. “We support the LGUs of Sta. Barbara, Iloilo and Davao City in their opposition to the ongoing field test trials in their area. They are all against the planting of Bt Eggplant in their areas,” he said.

Casiño has already filed House Resolution 237 which directs the Committee on Agriculture and Food to investigate the current field trials as it violates the laws on organic farming as well as regulations on environmental safety. 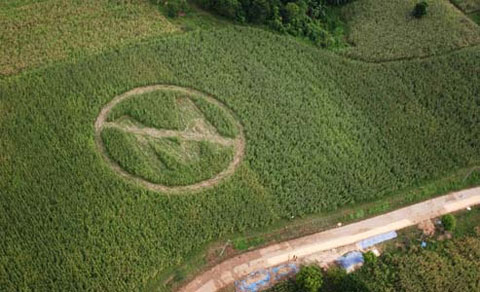 An anti-Monsanto crop circle in Mindanao. The bio-tech company has been accused of propagating GMOs and of using force and intimidation to corner its market. (Photo by Melvyn Calderon / Greenpeace)

“It is high time that Congress look into this issue to come up with better government policies on bio-safety that will help us attain long-term safe and sustainable food for the people,” Casiño said.

Organic farming is said to help condition and enrich soil fertility, increase farm productivity, reduce pollution and destruction of the environment, prevent the depletion of natural resources, further protect the health of farmers, consumers and the general public, and save on imported farm inputs.

A specific section of the law, Section 3(b), defines organic agriculture as including all agricultural systems that promote the ecologically sound, socially acceptable, economically viable and technically feasible production of food and fibers.

While it also includes the use of biotechnology and other agricultural practices, it was explicitly stated t that biotechnology does not include GMOs.

According to research of anti-GMO groups, Bt genes could cause cancer and tumors once ingested into the human body.

The group Masipag said there should be an immediate stop to the field trials as these may pose irreversible damage to the surrounding native crops and potential health hazards to the communities.

“Even now we have yet to receive reports if the said crop would be safe to eat and would offer no harmful effects to the environment. If there are no safety data, it is imperative that the field tests be stopped to protect the surrounding communities from the potential hazards of GMOs, Bt eggplant in particular,” it said.

Unfortunately, as a counter-effort to the proliferation of GMOs, organic farming has yet to fully take off in the Philippines. Advocates find it ironic because prior to the arrival of foreign transnational and multinational corporations (TNCs and MNCs) during the American occupation in the 1940s, agriculture in the Philippines was purely organic. 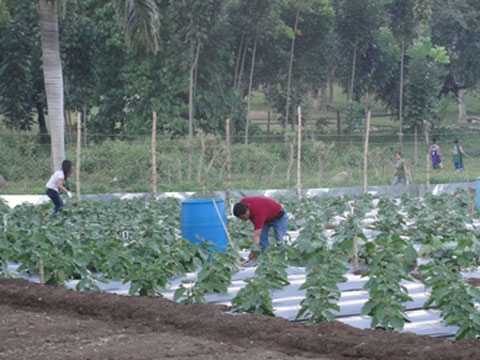 Workers prepare to uproot Bt eggplant at the University of the Philippines-Mindanao after Davao City mayor Sara Duterte stopped the field tests. (Photo from upmin.edu.ph)

“Philippine agriculture is heavily dependent on these TNCs and MNC, and many of them are pesticide manufacturers,” said Anakpawis Rep. Rafael Mariano. He added that the effects of pesticide use on the environment also had tremendous impact on the small farmers.

“Before the widespread application of agrochemicals, their rice farms also provided them with fish, snails and other viands for free. It’s the TNCs in agriculture and the full support the government gives them that makes it very hard for farmers to return to organic farming.”

According to Mariano, nine out of 13 big pesticide companies in the country are foreign firms, including Monsanto, Dow, Novartis, Aventis and Bayer. They control 85 percent of the market. Even the few Filipino pesticide companies have to import almost all materials.

Organic farming does not use any synthetic fertilizers and pesticides. This does not put pressure on the soil and the environment at large. The process makes extensive use of natural fertilizers like manure and bio-fertilizers composed of helpful microorganisms which are capable of providing nutrients to the plants.

In the meantime, proponents and consumers of organic food testify that organic food is tastier and more nutritious than conventional food. They cite various experiments that have reportedly confirmed that organic foods have more amounts of vitamin C and minerals like calcium, magnesium, phosphorus and iron than their conventional counterparts. Organic foods are also rich in phenolic compounds and other antioxidants which play a protective role in heart diseases and cancers.

“So not only eating is planting organic food good for the environment, it’s also good for you,” said Casiño.

Finally, the festival organizers said that the call to switch to organic farming has become more urgent in the face of climate change as the Philippines is considered a vulnerable spot for the phenomenon’s effects, which include massive flooding, sea-level rise and drought.

Organic farming also contributes to the fight against climate change as it reduces carbon emissions from farming system inputs such as fertilizers and pesticides, methane, CO2, and CO emissions in lowland rice paddies because of effective water management.