In Isabela, Soldiers Pretend to Be Guerrillas; in Davao, They Don’t Even Try

Residents of Jones, Isabela, told a fact-finding mission that the soldiers would present themselves as New People’s Army guerrillas and try to extract information from them. Human-rights advocates called it harassment and that it illustrates the extent the Philippine military has gone to try to suppress the 42-year-old communist movement.

JONES, Isabela – What gave the men away was their behavior. “They looked intimidating and asked questions arrogantly,” said Marjun Dacuso, a 29-year-old resident of sitio Dibulod in this town in the northern Philippines.

The men, around 20 of them, came to the house of Marjun’s brother Marvin on January 7. They disguised themselves as members of the communist New People’s Army (NPA), wearing camisa de chino, the poor man’s shirt, and parachute pants, supposedly a favorite pants of guerrillas. Some wore combat boots and were carrying firearms.

“But we had a feeling that they were soldiers because of their approach,” Marjun said. 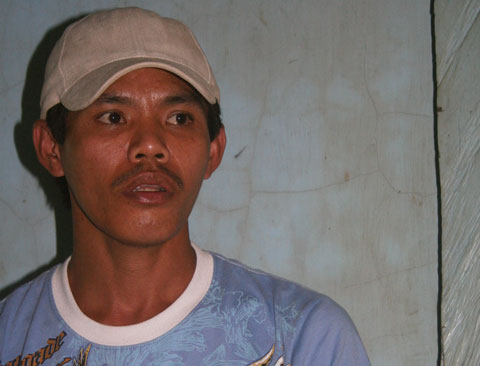 The incident, which the Dacusos related to members of a recent fact-finding and mercy mission to Isabela, illustrates the extent the Philippine military has gone to try to suppress the 42-year-old communist movement. Human-rights advocates say this visits by soldiers is a form of human-rights violation.

“President Benigno S. Aquino III said his government’s new internal security plan is different. Well, based on what we found during our mission, it is not that different from what happened in the previous administrations. There rights of civilians are still being violated,” said Nardy Sabino, secretary-general of the Promotion of Church People’s Response.

Sabino’s group was among those that organized the fact-finding and mercy mission in Isabela on January 21. Led by the human-rights group Karapatan, Manila-based and organizations from Isabela visited this town to gather data on human-rights violations allegedly committed by members of 77th Infantry Battalion. 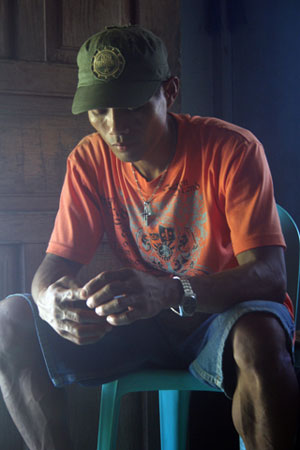 In the case of the Dacusos, it was pure harassment.

Marjun said his wife, Malou, 30, rushed to him in the morning of January 7 about the men who arrived at his brother’s house. “When I came to the house, two men, who introduced themselves as commanders, approached me. They were convincing me to go first to a hut but I refused. Then they asked me where the anniversary celebration of the Communist Party of the Philippines (CPP) was held. I told them I don’t know anything about it,” Marjun told the mission.

The CPP marked its 42nd anniversary on Dec. 26 and held public celebrations in several parts of the country. The NPA is the armed wing of the CPP.

The two men, according Marjun, kept asking him about the whereabouts of their “comrades” because they would continue the celebration. He stood by his first answer. Then they asked him to guide the men around his house. “They looked around the house, they saw my camouflage hats, and one of them said, ‘You have these? Maybe you’re an NPA?’”

That’s when Marjun confirmed that these men who were representing themselves as rebels were not NPA guerrillas.

“Because I kept telling them that I knew nothing about the anniversary, one of them put aside his firearm and came toward me as if about to hit me. When I sensed it, I immediately distanced myself from him,” Marjun said.

The men stayed for about an hour. They ransacked house. “When I came to my brother’s place, it was already messy. The men cooked rice and took it with them,” he said. Marjun said his wife was so traumatized “she was shaking.”

The soldiers also destroyed the Dacusos’ crops. “It’s okay if they cooked our rice, maybe they were really hungry, but they should not have ruined our place,” Marjun’s brother, Marvin, told the mission. 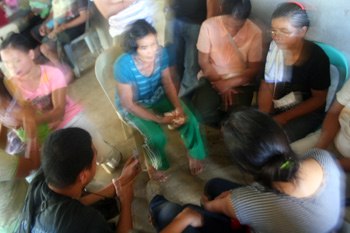 Other residents, whose identities are withheld for their security reasons, related to the mission and to Bulatlat.com that on Jan. 10, four armed men approached some 12 farmers working in their farm. The men, according to the farmers, asked them if they have seen their “kadua” (comrades). They said they got separated from the others.

The farmers said they saw no one, but the men stayed for an hour just the same. One of the four men even took a video of the four farmers. Later, the farmers saw the same men with a group of about 30 soldiers in their uniforms.

Fernando Dumalawon, another resident, also narrated that his son Rene, 24, and his companion Ronald Agustin, 22, were slapped by men who introduced themselves as members of NPA on Jan. 6.

Fernando said a neighbor told him that he witnessed how armed men hurt Rene and Ronald. The neighbor “said the two were being forced to tell the men where the camp of the NPA was. But since they did not know, they were slapped.”

Rene and Ronald were formers rebels and immediately left their place after the incident and have not gone back since, according to Fernando. 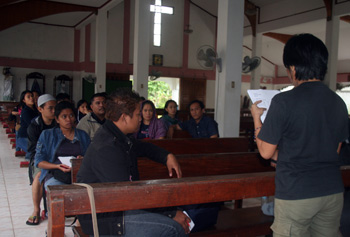 Part of the mission was a discussion on human rights. (Photo by Anne Marxze D. Umil / bulatlat.com)

The PCPR’s Sabino said most of the residents that they interviewed were all scared to talk about the militarization in their area. Some said that while soldiers are not seen in the morning, they know that they roam at night because the dogs would bark. Out of fear, many of the residents moved to other villages.

Marvin Dacuso also said members of the Citizen Armed Force Geographical Unit (Cafgu) accompanied these soldiers. “Some of the Cafgus were from the Visayas who are now living in sitio Dima, barangay Minori,” Dacuso said.

As part of the mission, the participants held discussions with residents about basic human rights. The mission also provided relief goods and schools supplies to the residents. A medical mission was also held, benefiting some 300 residents.