You Are Here: Home → 2011 → February → 1 → As Egypt Burns, Worry for Filipinos There and Over DFA’s Lack of Contingency Plans

As Egypt Burns, Worry for Filipinos There and Over DFA’s Lack of Contingency Plans

“The only way to ensure that Filipinos are safe in Egypt is for President Aquino to support the call of the international community to oust Mubarak,” said Garry Martinez of Migrante.

These were the calls of different members of cause-oriented groups who held a protest action in solidarity with the Egyptian people’s struggle to end the 30-year dictatorship of the regime Hosni Mubarak, which they described as being backed by the United States.

“The people of Egypt have spoken and risen. The US-backed regime of Hosni Mubarak must go. Mubarak’s ouster is the only way to resolve the current conflict,” Renato Reyes Jr. said. 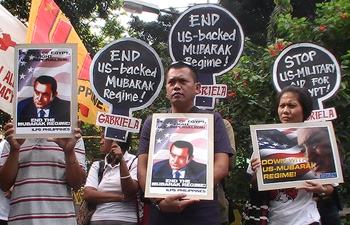 Activists rally near the US embassy to denounce Hosni Mubarak and show solidarity with the Egyptian people. (Photo by Anne Marxze D. Umil / bulatlat.com)

For days now, Egyptians have held uprisings through their country to call for the ouster of Mubarak, who is considered an important ally of the US in the region. They are now on their seventh day of protests, which began on Jan.25, weeks after a siilar uprising rocked Tunisia and changed the government there. On Tuesday, the Egyptian protesters also called for a “million man march” in Cairo as perhaps a final push to depose Mubarak.

“Our history is not far from what is happening now in Egypt,” Reyes said at the rally, recalling the Filipino people’s revolt against the dictator Ferdinand Marcos in 1986.

“We are in a nation that believes in people power and we fully understand and support the decision of the Egyptian people to exercise their rights and assert their sovereign will,” Reyes said. 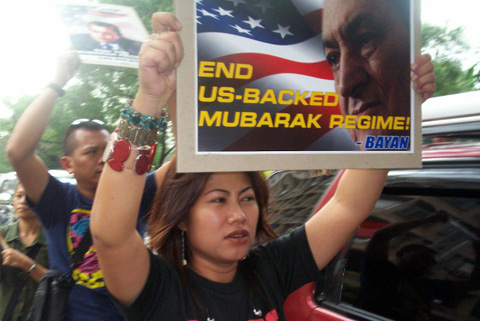 Activists rally near the US embassy to denounce Hosni Mubarak and show solidarity with the Egyptian people. (Photo by Ina Alleco R. Silverio / bulatlat.com)

He added that Mubarak is the closest ally of the United States in the region, with his regime receiving $1.3 billion of annual military aid from Washington. Mubarak also supported the US war on terror in the Middle East, Palestine and other countries. “That is why the US cannot let go of Mubarak,” he added.

“The US government has no problem supporting fascist dictatorships so long as these support US economic and military interests,” Reye said. “It’s the same story with Marcos and Mubarak.”

US President Barack Obama has urged the Egyptian government to institute reforms but stopped short of calling for Mubarak to step down. In response, Mubarak changed certain key personalities of his government but that did not stop the Egyptians from spilling out into the streets and demand reform. 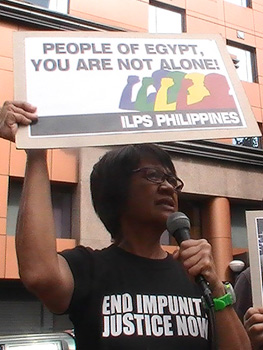 Rita Baua of ILPS Philippines says Egyptians should choose their leaders, not the US. (Photo by Anne Marxze D. Umil / bulatlat.com)

Martinez also expressed concern for the safety of the overseas Filipino workers in Egypt. According to the data of Department of Foreign Affairs (DFA) a total of 6,569 Filipinos are concentrated in Cairo and Alexandria.

About 1,674 students are also enrolled in university in Cairo. According to Martinez, there are also more or less 3,000 domestic workers and 500 Filipino residing in Egypt. “The only way to ensure that Filipinos are safe in Egypt is for Aquino to support the call of the international community to oust Mubarak,” Martinez said.

He challenged the DFA to come up with a workable contingency plan to evacuate Filipinos from Egypt in case the situation there deteriorates.

“How can they be sure that it is safe in Egypt when all means of communication and Internet connection are bogged down since Saturday?” asked Martinez. He said Migrante International’s concern is that the DFA will only say that they have plan but in reality there is none. “Just like what happened during the 2006 war in Lebanon. The DFA said they had a plan but when the war escalated they could locate the Filipino workers in Lebanon.”

Martinez criticized Undersecretary Esteban Conejos’s statement that the the DFA is ready. “There is not even a converging point where to pick up Filipinos. There is no route that they can use because the DFA is not even sure that countries like Lebanon, Jordan and Israel will let their airways be used to transfer Filipinos from Egypt.”

As of now, Migrante’s Egypt coordinator is still trying to locate Filipino workers so that they could also be contacted by their loved ones in the Philippines.