‘Morong 43′ Recall the Nightmare and the Struggle

Liberal categorically denied being a member of the CPP. But his interrogators refused to believe him and they continued to insist he was a CPP member. When he continued denying it, “that’s the time they issued warning threats.” An interrogator told him: “You’re so unlucky, you got dragged into this. Don’t you know they are NPAs you were training?”

“They are just community health workers,” Liberal would reply. He insisted he was tapped to be a resource person because he was active as volunteer in medical missions sponsored by the Alliance of Health Workers (AHW).

“But what will happen to you, you’re charged with a non-bailable crime?” the interrogators asked him. To which he replied, “I believe in the justice system in the Philippines.”

“But now you’re in jail,” his military interrogators said.

“I have a lawyer,” Liberal replied.

After Leila de Lima, then the chairperson of the Commission on Human Rights, visited them, Liberal felt a slight relief. “So, the people outside know where we are, at least,” he thought.

Liberal said it was heartwarming and invigorating to have witnessed the outpouring of support when they were brought to the Court of Appeals for the habeas corpus petition.

Several of the Morong 43 on the night that they stepped out of Camp Bagong Diwa. (Photo by Ronalyn V. Olea / bulatlat.com)

But it was only after de Lima’s second visit to Camp Capinpin, prodded by strong popular pressure, that the nightly repeated interrogations  stopped. But the detainees still lived in fear as, from time to time, they could hear the soldiers forcing some of the detainees to contradict their claims.

Two weeks since the abduction, the soldiers  took  detainees out one by one to ask them to overturn their statements, tell the world they were not tortured by the soldiers, and admit that they were indeed members of the revolutionary NPA or CPP. The soldiers promised to give them lawyers and would introduce them as “surrenderees.”

Liberal said these were the exact accounts of the detainees the soldiers had taken out at night. It was through this method that the military later came up with what is now known as the Morong 5, five members who have since issued statements supporting the military’s claims.

For Obera, the nights at Camp Capinpin were terrible — anyone could be brought out by the soldiers.

As public pressure for their freedom mounted, not only were the nightly interrogations stopped, they were soon transferred to a civilian detention camp where “we could listen to music, watch TV, see other people, welcome more guests,” said Obera.

They were virtually held incommunicado while at Capinpin. They were allowed to watch the news only two times in the two months and 24 days they were held there. Each time, it was to watch some of their fellow health workers being paraded as “surrenderee.”

Struggles While in Captivity

The Morong 43 health workers said they had conducted at least two concerted actions while in Camp Capinpin, one of which was to pressure the soldiers to allow them to be transferred to a civilian detention facility. 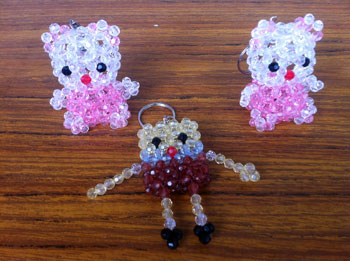 While in prison, the Morong 43 whiled away their time by creating keychains out of beads. The ones in the photo were made by Dr. Merry Mia-Clamor, who later gave them as gifts to friends. (Photo by Carlos H. Conde/ bulatlat.com)

In Camp Bagong Diwa, the detained health workers continued their health training. The female detainees galvanized the female inmates to unite with them in requesting the jail warden to have one side of the walls open for light and ventilation. The opened wall has been welcomed by the rest of the female inmates at Bicutan. So were the sheer number of visitors and supporters arriving for the Morong 43.

The Morong 43 were regarded as “high-profile, high-risk” prisoners. To Liberal, who was jailed on the fourth floor in another building inside Camp Bagong Diwa, that meant little to none in terms of activities. The prisoners on other floors, he said, had sports activities that they could  watch from where they were.

From the fourth floor, Liberal said, he could see the billboards in Alabang, which sometimes made him wonder if or when he would be able to go out and about.

As political detainees, the Morong 43 were regarded with a mixture of respect and curiosity at Camp Bagong Diwa. They were numerous yet peaceful and quiet, said the inmates. They frequently get remarkable visitors, for instance lawyers, congressmen and congresswomen, senators, foreigners.

The Morong 43 detainees had won the right to cook their own food if they so wanted. They could hold parties – where visitors and sometimes even some of their guards would bring some of the needed supplies.

“We shared our food and drinks with the other inmates,” said Obera, so that in the end, their get-together with visitors became an event to watch out for among the other inmates, who sometimes even requested songs in the programs.

The female inmates especially took a liking to the Gabriela song for women, said Obera. When activist-singers Jess Santiago and Danny Fabella visited on separate occasions, the entire floor for female detainees watched the impromptu performance.

The female detainees had divided themselves into three groups with revolving tasks in cleaning, cooking and “gating,” meaning entertaining visitors.

To keep their minds busy and to earn a bit while in prison, they learned how to do beadwork from their Muslim inmates. Even the male Morong 43 detainees learned to do it.  Liberal proudly showed us a green beaded wallet he made, Obera her blue and white wallet and charm. Later, they had to assert their rights to do beadwork, as the BJMP at first seemed to have tried to dissuade them.

“We also learned sign language, which the male and female inmates used to communicate with each other,” said Obera. That was how they soon communicated with the male Morong 43 detainees.

In their struggle in support for their two fellow detainees who gave birth,  Liberal said they almost got solitary detention. Their cell was “raided” because somehow the inmates managed to produce placards.

“Even the other female inmates supported the campaign to give the new moms the opportunity to be with their babies and to breastfeed them,” said Obera.

In time, even the jailguards learned to treat the Morong 43 with respect. Obera recalled a tough lady guard who would shout at all of them when ordering them to do the a count-off. Inmates at Camp Bicutan conducted a count-off of detainees three times a day.

“When she learned we were the Morong 43 health workers, her voice level went down. She became calmer toward us,” Obera  said.

In Camp Bicutan, they managed to conduct health checkups and training on the use of herbal medicine. They learned as well that government employees have numerous complaints about their benefits, but they did not raise it because they are in the government, and think that they have no right to do that.

Worse, they learned that many inmates there thought they no longer have rights because they are in prison. Which meant  they saw more than the light when their collective action succeeded in prompting the jail warden to open parts of the walls opposite the hallways to their prison cell.

Now most of the Morong 43 are free – five remain in captivity as “surrenderees” in the hands of the military, three have supposed legal charges to still face. The struggle for most of them now is how to get back to a normal life. (Read the sidebar: “A Year After Ordeal, Life Goes on for Freed ‘Morong 43’ But Scars Remain“)