Residents of Pantukan, a coastal town in Compostela Valley province, are locked in battle against two large-scale mining companies attempting to wrest full control of the area’s mineral resources. They also bewail the unfair advantage the government gives to these companies at the expense of small-scale miners.

The residents who belong to various small-scale mining associations have formed a group called “Save Pantukan Alliance.”

“This is our way of saying that we are now taking the cudgel in defending our land from plunder and destruction of large-scale mining,” said Belen Galleto, spokesperson of the group, during a press conference in Davao City.

The Save Pantukan Alliance identified Nationwide Development Corporation (Nadecor) and Napnapan Mineral Resources Inc. (NMRI) as the companies that have recently encroached into their area, claiming a total 6,575 hectares of land for extracting gold, bronze, copper and silver.

Galleto said residents of Nadecor are worried they could be displaced. 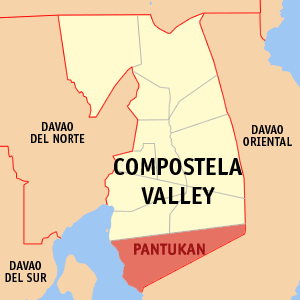 A map of Pantukan. (wikipedia)

Nadecor’s 1, 663-hectare claim covers areas where some 3,000 families of small-scale miners, indigenous peoples, farmers and small traders have established a living. Their livelihood centers on their small-scale mining operations.

The other company, NMRI, was granted rights by the government to claim a total of 4, 912 hectares of land in Pantukan for gold extraction through a Mineral Production Sharing Agreement (MPSA).  According to Galleto, there are about 5,000 families living within the NMRI claim.

Granted in June last year, the NMRI’s mineral agreement with the government covers the 81-hectare mining area of the Boringot, Biasong and Diat Small Scale-Miners Associations which was declared as “Minahan ng Bayan” (roughly, “peoples’ mines”) by the local government in 2009.

This map shows the areas being claimed by mining companies. Go to the DENR-MGB’s website to view specific claimants of each area.

“We know that large-scale mining will destroy our current production setup. They will just hire us as cheap labor while they take away large profits,” Galleto said.

All Eyes on Pantukan Gold

At least 13 companies have applied for mining claims of large areas of Pantukan as of April 2009. Based on data from the Mines and Geosciences Bureau’ s (MGB), these companies claims range from 800 to 13,000 hectares of land. (See List of Mining Tenements/Companies in Southern Mindanao)

In 1996, a landslide occurred in Kingking Village where a Canadian company, Echobay Mining/Toronto Ventures Incorporated, had been drilling.    Galleto recalled that many homes and farms were destroyed. Even the community church was wiped out.

Two years ago, a landslide also occurred In Barangay Masara, Maco, a nearby town, which, like Pantukan, is also part of the mineral-rich mountain ranges of the famous Diwalwal gold area.

The disaster that killed 24 people is still fresh in the minds of the residents. It happened right in the area being mined at the time by the British-owned Apex Mining Corporation.

“We cannot allow this to happen again,” Galleto said. She said they are better off mining ores with their bare hands than allowing heavy equipment that are proven to be more extractive and destructive of the environment.

Work in small-scale mining operations, as Galleto explained, basically means hard rock mining. A team of three miners usually work inside a tunnel for a few days.  They pound the earth for ore with their bare hands and process them for gold extraction.

Galleto laments that while the government granted mineral agreements to these large-scale mining operators, many of the small-scale miners associations’ requests for mining rights remain unheeded. 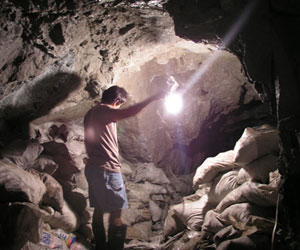 A small-scale miner inside a mining tunnel. (Photo: davaotoday.com)

A large-mining corporation can strike a contract with the government to mine vast hectares of lands for a period of 25-50 years, while the contract term for small-scale miners lasts only two years.

“It is just unfair that the government gives outsiders far better deals compared to us when we are the ones who maintain and manage the mining areas. In the first place, this is our home. Why would we do anything that could endanger the lives of our own communities?” Galleto asked.

The entry of large-scale mining has largely been blamed on the Philippine Mining Act of 1995. The law has been widely criticized for practically opening up the country to full control of mineral resources by large-scale mining companies.

Not only does the law provide foreign mining companies full equity and control of mining projects in the country, it also allows them generous agreements that are highly unfair to Filipinos, such as granting permission to exploit the mineral resources for as long as 50 years, permission to enter private lands and build structures, as well as the right to the water and timber resources within the mining areas.

Those in favor of the Philippine Mining Act of 1995 claimed the law would provide a much-needed boost to the economy.

But a look at the provisions of the law shows that it guarantees large-scale mining operators unfair advantage over small-scale miners. For instance, the law allows 100 percent repatriation of investments by large-scale mining companies operating in the country.

The government also only starts to earn its share after the mining operator has fully recovered its operating expenses.  The net profit of operation that goes to the government, which amounts to 60 percent, is also inclusive of corporate taxes, duties and other fees. The mining company gets a clean cut of 40 percent.

The small-scale miners of Pantukan are now asking the government to cancel permits given to Nadecor and NMRI.

They have joined the growing number of those demanding the scrapping of the Philippine Mining Act of 1995, owing to serious issues concerning national patrimony.