Groups welcome the Supreme Court’s decision junking the petition by Ombudsman Merceditas Gutierrez that sought to stop the impeachment case against her in Congress. 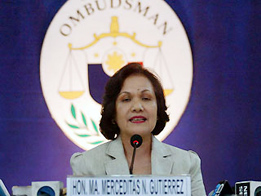 MANILA – The Supreme Court’s decision clearing the way for impeachment proceedings against Ombudsman Merceditas Gutierrez has been hailed as an important step toward investigating the many corruption and other charges against former president Gloria Macapagal-Arroyo.

It should also put added momentum to the ongoing legislative investigations into the corruption allegations against former military officials, particularly retired Armed Forces of the Philippines (AFP) comptroller Carlos Garcia, said Pagbabago! co-chairwoman Mother Mary John Mananzan. “We hope that the long-delayed impeachment process will reach its logical and just conclusion,” she said.

Mananzan said the decision of the high court will help pave the way toward finally making those responsible for massive corruption during the Arroyo administration to account their crimes.

“Removing Gutierrez from the Office of the Ombudsman is a crucial victory for the people who have long been fighting to end the corruption perpetrated with impunity by the Arroyo administration,” Mananzan said.

On Tuesday, Feb. 15, Supreme Court spokesman and administrator Midas Marquez announced that the court had voted to proceed with the impeachment case against Gutierrez.

In August last year, Bayan, together with other cause-oriented and people’s organizations filed an impeachment complaint against Gutierrez for betrayal of public trust. Bayan said Gutierrez failed to act on various cases filed against Arroyo and other high-ranking officials involved in anomalies.

Gutierrez filed a petition for certiorari, prohibition and mandamus in the Supreme Court  to suspend the committee hearings. Gutierrez also complained that there can be no two impeachment complaints filed against a public official in one year, which, according to her lawyer, retired Justice Serafin Cuevas, violates the constitution.

But on Tuesday, the high court ruled against Gutierrez, saying that there was no violation of due process and there is no violation of Article XI Section 3 of the Constitution that says no impeachment proceedings shall be initiated against the same public official more than once within a period of one year. According to Marquez, majority of the justices ruled that although there were two complaints referred to the House committee on justice, the committee tackled only one impeachment proceeding.

“The impeachment complaint, if successful, would be a historic first for the Ombudsman. It would surely test the accountability of government institutions under the Aquino government. This is a political process and would require the full support of the allies of Aquino at the Lower House,” Bayan said.