Bayan asks the government to be transparent in the decision-making process involving the fare increases. It also denounces the “element of deception” on the matter, pointing out, for example, that commuters of LRT 1 will be paying for the debts incurred by LRT 2.

MANILA – Critics of the proposed fare hike for Metro Manila’s railway systems expressed concern yesterday of a “midnight approval” of the increases, saying that the government has not been transparent on the issue.

Various cause-oriented groups lead by the umbrella group Bagong Alyansang Makabayan (Bayan) held a protest rally yesterday at the Department of Transportation and Communication (DoTC) despite the postponement of board meeting of the Light Rail Transit Authority (LRTA) the same day.

The DoTC board meeting was supposed to finalize the fare rate adjustment and the date of implementation. 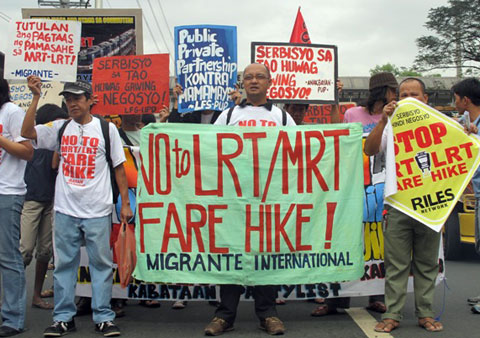 “There are no published rules or guidelines for raising fares. There are no existing standards on what reasonable fares should be. The LRTA is both the proponent and approving authority of the rate hike. This is definitely an anomalous situation,” said Renato Reyes, Bayan secretary-general.

He said the LRTA just came out with a new fare matrix and held public consultations and did not hold formal hearings as it is supposed to.

On Feb. 4 and 5, the DoTC held a public consultation with youth sectors, workers, and other cause oriented-groups including Bayan and Riles para sa Sambayanan Network on the fare rate adjustments originally scheduled for implementation on March 1. But the sectors strongly registered their position that the fare increase is “anti-people and unnecessary.” 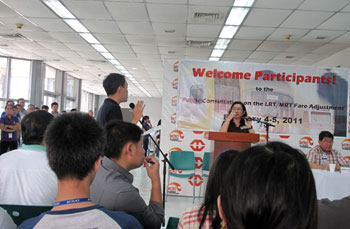 Bayan’s Renato Reyes asks a question during the consultation at the DOTC on Feb. 4. As a result of the consultation, the LRTA decided to defer the hike. (Photo by Anne Marxze D. Umil / bulatlat.com)

After the Feb. 4 and 5 public consultation, the DoTC deferred the scheduled increase and promised to study the inputs from the other sectors.

Bayan and other groups assert that the government should announce the time and venue of the LRTA board. The groups promised to continue protesting the planned fare increase even if it pushes through.

Bayan pointed out that the fare increase is arbitrary and merely seeks to pass on to commuters the huge debt burden of MRT and LRT.

Instead of penalizing commuters with a fare hike, the Aquino government should go after the private entities that shortchanged the government in the contracts to build and operate the train lines.

Reyes said the DoTC admitted that it has some P1.1 billion in collectibles from the MetroDevCo, a company that has the concession to develop commercial spaces in the MRT. “This should be collected first before there is any talk of a fare hike,” Reyes said. 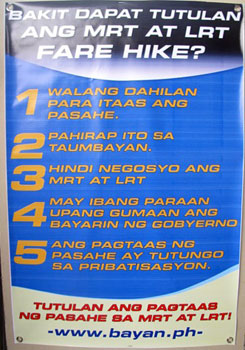 Bayan enumerates the reasons why the fare hike should be opposed. (Photo by Anne Marxze D. Umil / bulatlat.com)

Reyes questioned the fare increase, saying that the LRTA also admitted that even without a fare hike, the LRT 1 will still have a net gain of P23 million. “It is definitely not losing money and it can very well survive without a rate hike. So why raise fares?”

Bayan said the fare increase for LRT line 1 will be used to pay for the debts of LRT 2, which has less passengers and has a bigger deficit (P250 million) for 2011. Reyes said that the fare increase is unfair for commuters of LRT 1. “There is some element of deception in this scheme,” Reyes said.

The LRT line 1 is expected to generate from the fare hike a whopping P875 million in additional revenues, which will be used to pay off the LRT 2 debts.