CARP Lands in Tarlac City Being Claimed by Corporations

A farmers’ group believes that this is a case of landgrabbing and speculation in anticipation of and preparation for the construction of the Tarlac-Pangasinan-La Union Expressway (TPLEx). The group said that as the market value of lands around the superhighways are expected to skyrocket, business firms are trying to takeover farmlands even if it meant displacing farmers.

MANILA — Farmers in Balingcanaway, a village in Tarlac City, are gearing to go head-to-head against corporate interests encroaching on the 154-hectare agricultural estate they have been cultivating since 1997. Individuals with ties to popular fast food chain Pancake House are said to be claiming the lands covered by the Comprehensive Agrarian Reform Program.

The Alyansa ng mga Magbubukid sa Gitnang Luson (AMGL, Peasant Alliance of Central Luzon) said that more than 52 farmers and their families have been cultivating the disputed land for over a decade. Many of them are also farmworkers from nearby barangays, and, because of their efforts, the land has yielded 100 to 120 cavans per hectare every harvest season. Balingcanaway is adjacent to a village called Cutcut, which is inside President Benigno Aquino III’s family-owned Hacienda Luisita.

According to the farmers, the land used to be planted with sugarcane and was administered by a certain Teresita Cruz who represented Valdez Estate.

When the land was taken over by the government through the Comprehensive Agrarian Reform Program (CARP) in 1990, the farmers said, Cruz allegedly used her influence and money to pressure farmers to sell their Certificate of Land Ownership Awards (CLOAs). This was supposedly done without the knowledge of the Department of Agrarian Reform (DAR) office. The farmers were allowed to continue farming the land, but they had to pay P5,000 ($115) per hectare to Cruz. Through the years, the amount increased to P7,000 ($161) then to P10,000 ($230) in 2008.

In 2009, a certain Janette Peña and Bob Guinto arrived and claimed that they are the legal land owners. It was the first time that the farmers saw the two individuals and they had never heard of the land being sold or even leased to anyone else. They also knew that the land was registered and titled with the city, provincial and regional DAR offices.

The following year, on July 2010, about 50 armed guards under an agency headed by a retired colonel named Ronie Bonifacio, accompanied by local police led by a Commander Leonardo Taberdo, put up a barbed-wire fence around 60 hectares of the land. Armed guards also began to stand sentry around the fenced area. The guards frequently questioned the farmers every time they arrived to do their farming on the area not covered by the fence.

In the coming weeks, more restrictions were imposed. The guards began to block the irrigation system the farmers used.

The farmers went to village officials to report what happened, but the local officials did nothing.

On August 17, 2010, the farmers petitioned DAR to re-allocate the CARP-covered lands to their names. On October 11, 2010, they requested the provincial DAR office to investigate the dispute. They also filed lawsuits of Forcible Entry with Damages before the local Municipal Trial Court against Peña and Guinto. The court issued a status quo order, allowing the farmers to continue cultivating their lands.

In a show of collective strength and solidarity, the farmers dismantled the barbed-wire fence on November 29, 2010. Their action was witnessed by village officials and local police, and two farmers were arrested. Commander Taberdo said the arrest was ordered by someone he called “Gen. Bonifacio.” Since Taberdo was unable to charge the farmers with anything, he was forced to release the two men after an hour even as the farmers threatened to file grave coercion and illegal detention charges against him.

On December 1, 2010, the farmers received a letter, with the stationary heading “St. Tropez Holdings Corporation, which informed them that it was representing Peña and Guinto. As the letter allegedly did not look official or legal as it did not bear any seal or any other logo, the farmers refused to accept the letter. The farmers were being told to leave the land as it was supposedly owned by Peña and Guinto.

At present, 25 armed guards continue to patrol the disputed land day in, day out. They also accost the farmers. The farmers said that the guards’ very presence was tantamount to harassment and they able to work on their lands on the sheer assertion of their rights. The guards also stop them from bringing in hand tractors and other equipment.

The entire community of Balingcanaway is now mobilizing to support the farmers’ claim to the land. Residents have begun holding discussion groups and have put together a plan to insist their rights to cultivate the land. They are currently preparing to begin planting vegetables in the coming week and coordinated actions are in the offing so they can bring hand tractors past the outpost. 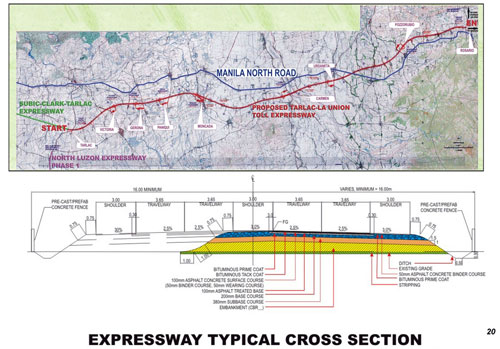 AMGL believes that this is a case of landgrabbing and speculation in anticipation of and preparation for the construction of the Tarlac-Pangasinan-La Union Expressway (TPLEx), connecting the Subic-Clark-Tarlac Express way (SCTEx). The group said that as the market value of lands around the superhighways are expected to skyrocket, business firms are trying to takeover farmlands even if it meant displacing farmers.

AMGL also said the case is not isolated as farmers from nearby barangays are also facing the same threat.

Guinto in the meantime, is said to specialize in mergers and acquisitions, joint ventures, foreign and domestic investments, real estate projects such as hotel and property development and management and real estate transfers, corporate organization and restructuring, government infrastructure projects, business process outsourcing projects, and project finance and loan syndication. According to his profile posted on the website of the Nisce Mamuric Guinto Rivera and Alcantara law firm, he also represents the firm’s clients in commercial matters before various government agencies.

Both Peña and Guinto are employed by St. Tropez Holdings Corp., an investment firm headed by Gabriel Singson, Jr. as president and Martin Lorenzo as chairman of the board. Singson is a former finance undersecretary on privatization and son of former Central Bank governor (1993-1999) Gabriel Singson. He is also connected to Macondray, an investment holding firm owned by the Lorenzos. Lorenzo is chairman of the board, president and chief executive officer of Pancake House, Inc.

Both Peña and Guinto are investors of Pancake House Group, also owned by St. Tropez Holdings.