Postponing their scheduled closing ceremony at least three times, both panels appeared to have struggled to agree on several ticklish issues, until finally emerging from their talks at around eight in the evening Oslo time.

Relief showed on the faces of GPH panel chair Alexander Padilla and his NDFP counterpart Luis Jalandoni as they read their respective closing statements and later good-naturedly answered questions fielded by members of the Philippine and international media who have been waiting for more than five days for news from the negotiations.

Both panels, as well as the Royal Norwegian Government, the third-party facilitator of the talks, announced the reconvening of the Joint Monitoring Committee (JMC), and the reactivation of the reciprocal working committees (RCWs) on socio-economic reforms and the formation of working groups for political and constitutional reforms, which will be next in the agenda of the discussion after this the present round of talks on socio-economic reforms. 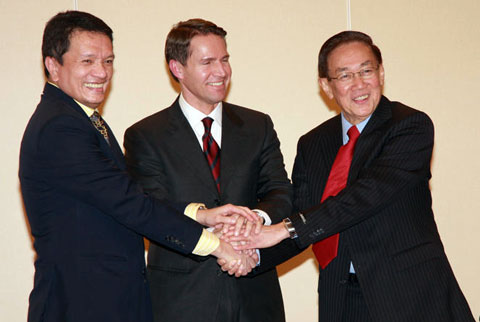 The JMC was formed in 2004 to monitor the implementation of the Comprehensive Agreement on Respect for Human Rights and International Humanitarian Law (CARHRIHL). For almost seven years, the GPH, then known as Government of the Republic of the Philippines (GRP), refused to convene the JMC.

The JMC agreed to meet again next month and to schedule succeeding meetings.

Issues related to the implementation of the CARHRIHL were also discussed.

In a joint statement, both panels agreed on a general timeframe for completing the draft comprehensive agreements on the remaining items of the agenda.

The substantive agenda up for discussion is the Comprehensive Agreement on Socio-Economic Reforms (Caser), regarded as the “meat” of the peace negotiations.  Both panels drafted their proposals for Caser in 1998 but failed to reach an agreement on this under both the Gloria Macapagal-Arroyo and Joseph Estrada governments. Both panels agreed that the Caser may be completed and signed by the panels in September this year.

The discussion on political and constitutional reforms is the next agenda item after Caser. The draft Comprehensive Agreement on Political and Constitutional Reforms (CAPCR) may be completed and signed by the panels in February 2012, according to the timetable set by both panels. 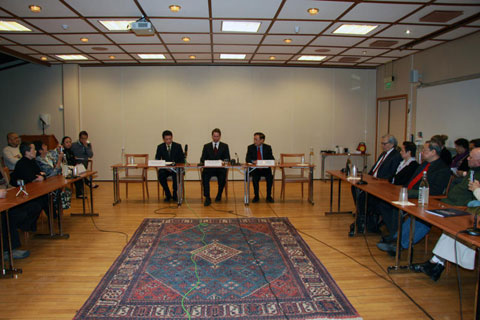 Both panels deliver their respective closing statements. (Photo by Raymund B. Vilanueva / bulatlat.com)

The draft Comprehensive Agreement on End of Hostilities and Disposition of Forces (CAEHDF) may be completed and signed by the panels in June 2012, the joint statement states.

Both panels agreed to have three bilateral meetings to be held in the second week of June and the second and fourth weeks of August this year. The first bilateral meeting shall discuss “Bases, Scope and Applicability” of Caser and the RWCs’ counterpart sections on “agrarian reform and rural development” for the NDFP and “asset reform” for the GPH, and “national industrialization” for the NDFP and “industrial policy” for the GPH. They agreed to exchange their respective drafts of the sections scheduled for discussion two weeks before the first bilateral meeting.

The GPH claimed credit for facilitating the participation of three NDFP consultants while acknowledging the release of three prisoners of wars, a retired army sergeant and two police officers, by the New People’s Army (NPA), armed wing of the Communist Party of the Philippines (CPP).

“We have facilitated the participation of NDFP consultants,” Padilla said. “The NPA has released a former soldier and two policemen.” The NDFP consultants being referred to are Elizabeth Principe, Randall Echanis and Rafael Baylosis who have been charged with what they claim are criminal charges.

Echanis and Baylosis are members of the NDFP Reciprocal Working Committee on Social and Economic Reforms (RWC-SER) while Principe is a political and constitutional reforms consultant. The NDFP also welcomed the recent release of NDFP consultant Angelina Bisuna Ipong who had been detained for almost six years.

As a confidence-building measure, the GPH reiterated its commitment to undertake steps for the release of prisoners and detainees. It said it will continue to work on appropriate measures to effect the expeditious release of all or most of the 14 NDFP consultants and personalities before the second round of formal talks, subject to verification as provided in the Joint Agreement on Safety and Immunity Guarantees (Jasig) Supplemental Agreement dated June 26, 1996, or on the basis of humanitarian and other practical reasons.

“The GPH panel is committed to stay the course of peace. The goal of a just and enduring peace has compelled us to come to the table, and to stay at the table,” Padillla said. 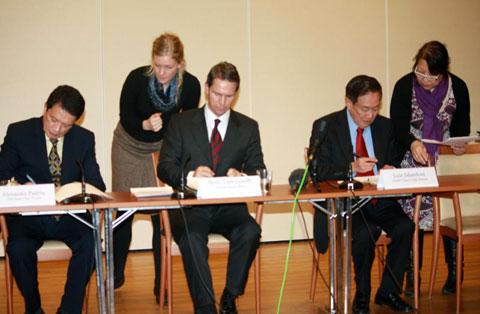 Both panels and the third party facilitator signing the Oslo joint statement. (Photo by Raymund B. Vilanueva / bulatlat.com)

The NDFP added four names to the list: Danilo Badayos, Leopoldo Caloza, Alan Jazmines and Ramon Patriarca whose release shall be subjected to the same process.

The NDFP also welcomed GPH’s declaration that the CPP, NPA and NDFP are not terrorist organizations. Jalandoni, noted, however: “Much more has to be done in ensuring that all GPH departments and agencies, especially the military and police forces, understand, respect and abide by this position.”

Jalandoni, however, criticized reported violations by GPH security forces of the weeklong ceasefire agreement in Mindanao during the talks.

“GPH security forces have conducted offensive operations in violation of the current ceasefire , under the guise of civil-military operations,” the NDFP peace panel chairman said.

Both panels agreed to reaffirm previous agreements, albeit with some qualifications on the part of the GPH.

“The Filipino people demand and will continue to struggle, by all means possible, for nothing less than a just and lasting peace,” Jalandoni said. (With reports from Ronalyn V. Olea)