The book, Jose Maria Sison: A Celebration, is a celebration of Sison’s life and his contributions to not only to the Filipino people’s struggle for liberation and social justice, but to the rest of humanity’s battle for good against the great evils wrought by  capitalism.

MANILA — Judging from the contents of Jose Ma. Sison: A Celebration, Jose Ma. Sison is well-loved and a much-admired man, and those who love and look up to him are passionate in their defense of this controversial, much-maligned but undeniably unforgettable individual.

The book, as the title states, is a celebration of Sison’s life and his contributions to not only to the Filipino people’s struggle for liberation and social justice, but to the rest of humanity’s battle for good against the great evils wrought by  capitalism. (The book will be launched at 6 pm today, February 22, at the UP Balay Kalinaw, UP Diliman.)

Writers ranging from university professors to newspaper columnists to human-rights lawyers all assert how Sison, from the time he was a student in the University of the Philippines (UP), synthesized the experiences in war and struggle for democracy in other nations and put together a uniqe blueprint for the Philippines and Filipinos to follow in their own campaign for freedom. 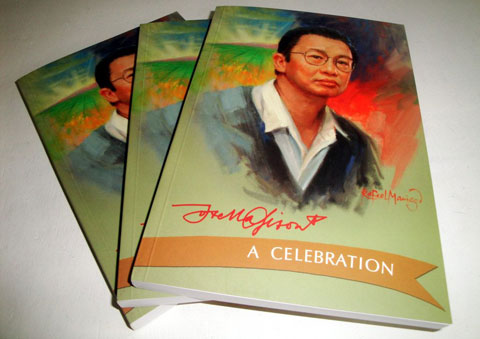 “Jose Ma. Sison: A Celebration” will be launched today, Feb. 22, 6 pm, at the Balay Kalinaw in UP DIliman.) (Photo by Aklat ng Bayan / bulatlat.com)

Luis Jalandoni, chief negotiator of the National Democratic Front of the Philippines, in his article “JMS’ Contribution to the GRP-NDFP Peace Negotiations,” gives insight to the dialectics of the peace negotiations. Far from depicting Sison as a man of war, Jalandoni testifies how Sison used his innate diplomatic skills and uncompromising grasp of revolutionary principles and help prevent the 1992 peace talks from  collapsing. Jalandoni also states how Sison’s critiques and analyses on the workings of peace talks between warring parties in other nations have been crucial in keeping the NDFP’s own handling of its end in negotiations with the government on the correct path. Historic agreements forged with the GRP (now called GPH), Jalandoni says, were drafted, completed and signed with Sison’s unerring guidance as chief political adviser.

UP Manila Prof. Edberto Villegas traces Sison’s roots as a Marxist. He explains how Sison’s veneration of the most humane theory of Marxism was never without understanding, but was and is in fact founded on deepest comprehension of what Marxism has always sought to achieve for humanity and the oppressed. Sison’s Marxism, Villegas attests, was born not only out of diligent study but out of practice: Sison the ideologue is also Sison the organizer, the intellectual who put his knowledge to the test and into practice by immersing himself in the labor and struggles of the working people.

As Kabataan party-list Rep. Raymond Palatino, the youngest among the contributors in the book, states, “Joma is not an armchair revolutionary: he offered concrete, practical and radical alternative means on how to launch a revolution. Joma’s fidelity to Marxism has has taught many activists the value of standing up for one’s principles.”

Sison, Palatino says, is a “fighting materialist,”  a theorist of the future, not of the past and this is what assures the strength and permanence of his political and ideological legacy.

Here we find essays giving detailed and incisive analysis of Sison’s poetry and the romantic patriotism evident in his poems.
Sison’s poetry —  some of them written in the freedom of the countryside, some of them penned in the confines of prison, and still some the product of days spent battling a longing for the beautiful country he was forced to leave — attest to the man’s innate gentleness and sensitivity. It was perhaps in his moments of loneliness and sad contemplation that he turned to poetry, and in his poems the sadness was given shape into words that urge and exhort the reader to love his country and win the war for its liberation.

National Artist for Literature Dr. Bienvenido Lumbera and poets Eduardo Maranan, Alfredo Salanga and Nonilon V. Queano analyze Sison’s poetry and the frame of mind and social circumstances that fueled Sison’s creative process. E. San Juan, Elmer Ordoñez and Gelacio Guillermo explain the historical roots of liberation poetry in the Philippines and, as they do, they do not fail to cite Sison’s work as being true to the calling made by Mao Zedong that artists must serve the people in their craft.

Lumbera discusses Sison’s earlier poems as expressions of Sison’s self and his personal history. Lumbera, however, asserts that beyond being autobiographical markers of Sison’s life, the same poems are testaments to how an individual survives torture, isolation and the very threat of violent destruction through sheer will and the unshakable trust that beyond the prison walls what he has lived and fought for thrives: an armed revolution against the dictatorship.

Salanga’s theory, meanwhile, is that the personal is also the political: Reading Sison’s poetry, he says, it’s clear that the poet viewed his experiences from eyes that saw the world as an arena of struggle and his own self an active participant in it.

The poet in his prison peoms, Salanga says, grasps firmly what is real — his own suffering, yes, but more so the suffering of his people.

In Celebration, too, is an essay giving tribute to Sison for his guidance to the revolutionary armed forces of the New People’s Army through his his historic article “Specific Characteristics of Our People’s War.” Writer Patrica Agbulos, of course, credits the work to Amado Guerrero and says that SCPW has been and remains to be valuable in the conduct of the Filipino people’s armed war against their oppressors and their mercenary army.