Joseph Canlas, AMGL chair, said the previous Cory government all but destroyed the spirit of People Power when police and military troops shot and killed farmers holding a peaceful demonstration in Mendiola on January 22, 1987, an event that has since been called the infamous Mendiola Massacre.

“Cory also implemented the CARP which was useless to farmers but valuable to landowners. She promised to distribute the country’s agricultural lands to farmers, but she never did. Instead she implemented the Stock Distribution Option (SDO) program and tricked the farmers into becoming mere “shareholders.” In the meantime, to quell peasant unrest, she launched the “Total War Policy” which resulted in gross human-rights abuses,” Canlas said.

Now that Cory’s son is in power, one would have thought that the son would attempt to accomplish what the mother failed to do, Canlas said.

“But this isn’t the case either. After nearly a year in power, Noynoy Aquino is shaping out to be like his predecessors – indifferent to the point of cruelty to the plight of farmers. He has been feigning deaf and blind to the issue of the SDO and the demand of farmworkers that the lands of Hacienda Luisita be given to them as a matter of social justice and as a matter of law,” he said. 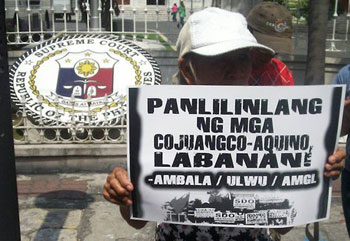 25 years after Edsa, the Cojuangco-Aquino clan still deny Hacienda Luisita farmworkers of the land they till and that the neglect suffered by the greatest majority of the population could not be called “democracy.” (Photo by Ina Alleco R. Silverio / bulatlat.com)

Canlas said those who believe that the names Cojuangco-Aquino to be synonymous to freedom or the restoration of democracy in the Philippines should study history.

“They should rethink their views and find out what truly happened in the aftermath of Edsa 1. Noynoy Aquino is not the rightful heir to the EDSA People Power uprising and its legacy because he has already betrayed it by denying the farmworkers of his family’s hacienda their just due,” he said.

Alyansa ng Manggagawa sa Hacienda Luisita (Ambala), the United Luisita Workers’ Union (ULWU) and AMGL joined the KMP in a protest action, pressing the Supreme Court to release its decision on the issue of SDO and the controversial compromise agreement the HLI management foisted on the farmworkers of the sprawling sugarcane hacienda in Tarlac. The farmworkers also denounced the upcoming government-led celebrations slated on February 25 as a farce and sorry tribute to the essence of the uprising.

ULWU-Ambala spokesman Fracisco Dizon decried what he said was the Supreme Court’s “dilly-dallying” on the HLI case. He said here was reason to be believe that the Aquino government was leaning on the High Court to either relegate the case to the backburner and deliberately delay the release of the decision, or release a decision inimical to the welfare of the farmworkers.

“We do not understand why it is taking the Supreme Court so long to decide on our case. This is a matter of life and death for all of us,” he said.

Dizon added said that the Cojuangco-run HLI management continues to fool farmworkers into surrendering their rightful claim to the land.

“Life is harder than ever for the farmworkers of Hacienda Luisita,” he said. “The Cojuangco management continues to take advantage of the desperation of farmworkers by buying them off or forcing them to rent their respective parcels of land for P10,000 a year for every one hectare,” he said.

According to Dizon, farmworkers and their families are trying to make ends meet by planting small plots of land with vegetables and rice, but everything depends on how far they can assert their rights to cultivate the land.

“HLI henchmen and military elements go around villages quietly pressuring families into surrendering their land rights. Soldiers in plain clothes carry small firearms and make the rounds of houses pretending to make friends with residents and poisoning their minds against the KMP and Ambala. Those of us who are active in the peasant organizations are banned from finding employment as farmworkers in the hacienda,” he said.

Regarding the Edsa 1 commemorative activities, Dizon said farmworkers of Hacienda Luisita are definitely in no mood to celebrate.

“Those of us who have televisions will probably watch the programs and news about it, but it is doubtful that we will be putting up yellow ribbons or yellow balloons. The meaning of Edsa 1 for the farmers does not lie with grand concerts or fireworks displays or anything like that. Edsa 1 for us is about fighting oppression and restoring true democracy. We are still fighting oppression, we are looking for democracy. Giving land to the landless and giving what the poor people need is democracy. Making sure that the working people are able to eat, have homes and enjoy stable and gainful employment is democracy. These are things we do not have now, so what democracy is this government talking about?”