“The greed of the Cojuangco-Aquinos extends to Pangasinan. Now they are claiming that they own the lands that farmers have developed since the Spanish times,” said AMGL chairman Joseph Canlas.

MANILA — The Cojuangcos are at it again.

According to a farmers group based in Central Luzon, the Cojuangco-controlled Central Azucarera de Tarlac Realty Corporation (CAT) is claiming ownership of 386.8-hectares of agricultural and residential lands covering some 12 villages in Bayambang town, province of Pangasinan.

The Alyansa ng mga Magbubukid sa Gitnang Luson (AMGL or Alliance of Farmers in Central Luzon) said it firmly opposes all moves of the CAT to take over the area, saying that if the Cojuangco-owned company succeeds, thousands of famers and their families will be displaced.

The contested area is also the site of the 289-hectare Camp Gregg Military Reservation established and used by the US colonial government from 1903 to 1949.

“The greed of the Cojuangco-Aquinos extends to Pangasinan. Now they are claiming that they own the lands that farmers have developed since the Spanish times,” said AMGL chairman Joseph Canlas. 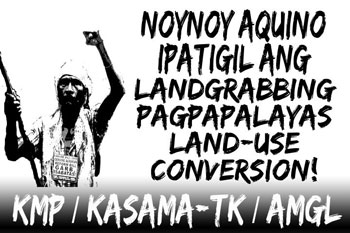 Canlas said the Cojuangcos are staking their claim based on assertions that the land was owed by a certain Isabelo Hilario, supposedly an arriendero or a contractor of sugarcane who failed to deliver goods he promised the company. This Hilario allegedly paid CAT with the lands in Bayambang.

“The Cojuangcos think the farmers and residents of Bayambang are stupid. We will prove to them that they are dead wrong. They did not succeed against farmers in Hacienda Luisita, they will not succeed in Bayambang,” said Canlas.

Camp Gregg Military Reservation was established on October 13, 1903 by the US colonial government. It was only on March 27, 1949 that the land was turned over to the Philippine government, particularly to the Bureau of Lands on September 29, 1949. The reservation covered barangays Cadre Site, Sancagulis, Bical Sur, Bical Norte, Magsaysay, Del Pilar, Buayaen, Dusoc, Telbang, Zone 7 and Poblacion Sur. The said villages are home to about 20,000 people. Based on the categorization of the government’s statistic office, 65 percent of the reservation is rural while the rest is considered urbanized.

“The Cojuancos say that Hilario gave them the land as payment for uncompleted transactions. The contractor supposedly paid the Cojuangcos with the lands on April 30, 1947. If that was true, then how is it that the Cojuangcos are staking their claim now and not decades before? This is obviously another ruse on the part of this notorious family of landgrabbers – they are trying to pull a fast one on the farmers and the rest of the residents,” Canlas said.

In September 5, 2007, the Supreme Court laid down a decision on a case involving the reservation. Two petitioners, Jesus Cayabyab and Zaldy Lazo won against the claims of a certain Rosemarie Gomez de Aquino represented by her counsel Armando Aquino that she owned property that was part of the former military reservation.

The Court agreed with the petitioners when they claimed that they did not occupy the property at de Aquino’s tolerance. It said that the land is public in nature which means that it is owned and administered by the government. Cayabyab and Lazo also said that de Aquino’s supposed land ownership title was spurious, having been derived from older titles issued on the said military reservation.

In the House of Representatives, a resolution was filed in 1998 seeking the intervention of the Committee of Agrarian Reform also on the same matter. The HR00013’s title stipulates that the farmers of the former military reservation have occupied/cultivated the area for decades and have received certificates of land transfer from the Department of Agrarian Reform but are facing eviction by parties holding titles to the property. The principal author was Rep. Leonardo Q. Montemayor and the resolution was first read July 28, 1998.

The Supreme Court case and the resolution in congress are proof that disputes over the land formerly occupied by the military camp are not new.

According to Canlas, the older generation of farmers who still reside in the area affirm that their own parents up to great-grandparents tilled the lands even when most of it was still consisted of forests. They cultivated the land all throughout the period of the American and Japanese colonization.

The Cojuangcos during the Marcos dictatorship

In the meantime, Canlas said the Cojuangcos first tried to claim the land during the dictatorship of Ferdinand E. Marcos.

Based on reports, the Cojuangcos applied for rights to land conversion when Marcos was in power. The application was approved, but they did not develop the area.

In September 1972, the second presidential decree that Marcos issued under martial law declared the entire Philippines a land reform area. A month later, he issued Presidential Decree No. 27, which contained the specifics of his land reform program. On paper, the program was the most comprehensive ever attempted in the Philippines. Holdings of more than seven hectares were to be purchased and parceled out to individual tenants (up to three hectares of irrigated, or five hectares of unirrigated, land), who would then pay off the value of the land over a fifteen-year period. Sharecroppers on holdings of less than seven hectares were to be converted to leaseholders, paying fixed rents.

Based on reports, the Marcos land reform program initially appeared to break down many of the large haciendas in Central Luzon, a traditional center of agrarian unrest where landed elite and Marcos allies were not as numerous as in other parts of the country. As time went on, however, the landowning families including the Cojuangcos maneuvered to take over agricultural lands or maintain their existing ownership. One of the most powerful Conjuangcos, Eduardo ‘Danding’ Cojuangco, branched out his business interests to Pangasinan.

The program was generally considered a failure. Only 20 percent of rice and corn lands, or 10 percent of total farm lands, were covered.

In 1985, 13 years after Marcos’s proclamation, 75 percent of the expected beneficiaries had not become owner-cultivators. Three years later, less than 6 percent of all agricultural households had received a certificate of land transfer, indicating that the land they were cultivating had been registered as a land transfer holding. About half of this group, 2.4 percent, had received titles, referred to as emancipation patents. On the whole, the program implementation was selective, mismanaged, and subject to considerable graft and corruption. 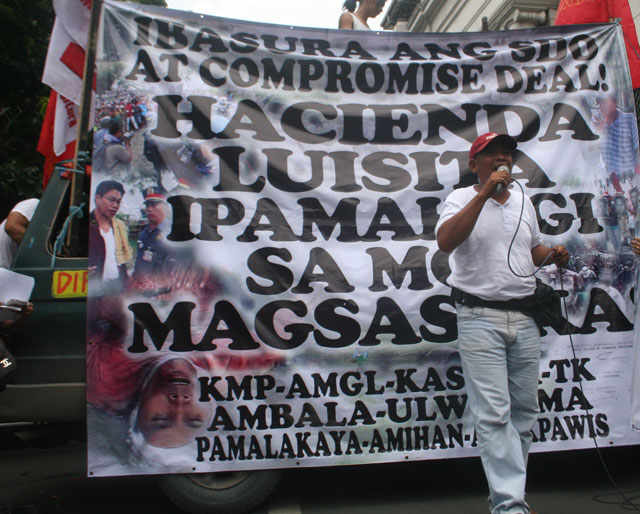 “They (Cojuangcos) did not succeed against farmers in Hacienda Luisita, they will not succeed in Bayambang,” said AMGL chairman Joseph Canlas. In photo, ULWU acting president Lito Bais addressing Luisita farmers during a picket outside the Supreme Court last year. ( File photo / bulatlat.com)

As for Hacienda Luisita, it was in 1957 when Jose Cojuangco, Sr. purchased it with money partially borrowed from the Central Bank of the Philippines Monetary Board and the Government Service Insurance System (GSIS) on the condition that the land would be distributed to small farmers. In 1985, the Manila regional trial court ordered the Cojuangcos to sell the land to DAR for distribution to farmers. The Cojuangcos elevated the case to the Court of Appeals. The following year in 1986, Marcos was ousted and the new congress under Cory Cojuangco-Aquino passed an agrarian reform law that allowed the Stock Distribution Option in lieu of actual land distribution.

“Even if they deny it, the Cojuangcos benefitted from the Marcos dictatorship because they took advantage of the dictatorship’s bogus land reform program, Whatever ‘rights’ they say they have to take over the land was based on manipulation and abuse of power. It’s highly ironic that the Cojuangcos are now asserting this twenty-five years after the EDSA People Power uprising which their own family member Cory helped lead. In any case, they should know that the farmers have been making this land productive since the 1950s and there is no greater claim than that,” he said.

Canlas said that farmers in Bayambang are holders of Certificate of Land Transfer (CLT) and Emancipation Patents (EPs). They also applied for the same under PD 27.

AMGL said the Cojuangcos have been attempting to evict the farmers of Bayambang since the 1960s. The group said the Cojuangcos sent armed goons to threaten and force residents to leave their farms. At present, CAT Realty Corp. is conducting surveys on the lands.

The group has issued appeals to the Bayambang local government of Bayambang and to the office of Pangasinan Third District Rep. Rachel “Baby” Arenas to intercede in behalf of the farmers and stop the renewed attempts of the Cojuangcos to take over the land.