MANILA – This was not the first time Gil Lebria, 37, had gone abroad for work. Unfortunately, this was also not the first time that he and others like him encountered a major problem that the Philippine government had ignored and, as a result, they were forced to return home earlier than planned, empty-handed.

“I feel terrible because for a while our situation in Libya had seemed better compared to my previous overseas postings,” Lebria told Bulatlat.com in an interview. He is “happy to be home” and to be “far from the trauma and the war” but he was worried and sad for other Filipinos left there to fend for themselves.

Even though Lebria’s overseas career had been unsuccessful from the start, he said he could not help but continue applying for jobs abroad each time he was repatriated. While many would think of him as hardheaded, he reasoned that working abroad is his only way of surviving because a job with decent salary is rare in the Philippines.

Lebria’s first two attempts to apply for a job abroad – first to Australia, then to Taiwan — were both frustrated by illegal recruiters. He spent nearly $2,300 per application only to find out the recruiters were fake. This, he said, saddled his mother with huge debts and, this, in turn, pushed him even more to find work abroad. Debts had to be paid, he said. 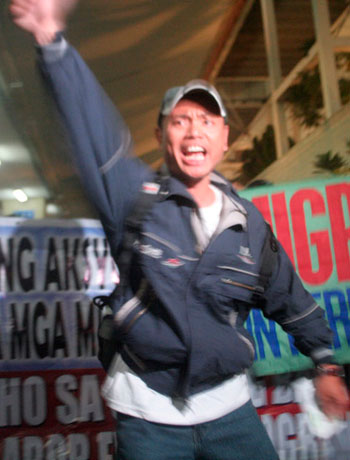 When finally he landed a job as storekeeper in Saudi Arabia in 2000, his employer, unfortunately, did not remit their salaries for a year, forcing the migrant workers, including Lebria, to launch a company-wide strike. In retaliation, the company sent them to prison and, later, back to the Philippines.

Five years later, Lebria applied again and was deployed to Taiwan, where their company, like in Saudi Arabia, did not pay their salaries. On top of being denied their salaries, Lebria and his co-workers were also overcharged with placement fees and forced to agree to a “contract substitution.” They struck to protest this, succeeding in completely paralyzing the company’s operations. This forced their employer to favorably respond to the workers’ concerns but the company singled out Lebria, who had stood as the workers’ leader.

His employers tried twice to bribe him, he said, asking him to stop leading protest actions that paralyze the company’s operations. Lebria said the last bribe offered to him amounted to more than a million New Taiwan dollars. When he refused, the company guards abducted Lebria and 15 other overseas Filipino workers on Aug. 2, 2005 and were beaten up minutes before they were forced to take a flight back to Manila.

“I was vomiting blood,” Lebria told Bulatlat.com. It was just his luck that two doctors among the passengers demanded to have him brought to a hospital. Their airplane landed in Hongkong and Lebria was brought into the intensive care facility of St. Princess Margaret Hospital. He eventually returned to Taiwan to complain and file for damages against his former employers. Upon returning to the Philippines, he attended congressional inquiries about their case, which caused the recall of top Philippine diplomats in Taiwan.

After his complaint hearings in Taiwan was done, Lebria applied for work in Kuwait in 2006. This time, he became a coordinator for Migrante International, the largest OFW group. While working for the upliftment of conditions of migrants, the OFW group invariably criticizes the inept services of the Philippine embassy in handling cases of abuses against Filipino migrants in Kuwait.

On Sept. 3, 2008, the company’s project secretary told him that he had been fired. No reason was cited. Migrante-Middle East said they have basis to suspect that Lebria’s dismissal from work was instigated by “those who got furious with (his) exposé and statements” against the Philippine embassy, calling it a an “employment sabotage.”

Four months later, Lebria applied for work in Qatar. Even before he arrived there, his co-workers had already been asking their company to release their salaries on time. When Lebria arrived, being a natural leader, he spoke in behalf of the migrant workers. He ended up in a fight with his supervisor. He said he only defended himself from his supervisor who had beaten him up.