You Are Here: Home → 2011 → March → 12 → Philippines Urged to Protect OFWs as Protests Spread in Middle East

Migrante International said the government’s “slow, dismaying and disorganized action” in repatriating overseas Filipino workers who were trapped in strife-torn Libya should not be repeated in other countries in the Middle East and North Africa, where protest actions against governments intensify.

Migrante International said the government’s “slow, dismaying and disorganized action” in repatriating overseas Filipino workers who were trapped in strife-torn Libya should not be repeated in other countries in the Middle East and North Africa, where protest actions against governments intensify.

“They cannot just force us to accept that they have done everything that they could and the remaining 15,000 (Filipinos) in Libya remain there on their volition,” said Garry Martinez, Migrante International chairman. “After milking OFWs of their hard-earned remittances to save the economy, (the government) would tell them that ‘we are sorry but we have done everything that we could.'”

In Saudi Arabia, outrage from its Shia community began to bubble up last month after the arrest of their cleric Sheikh Tawfiz al-Amer, who was calling for a constitutional monarchy. Though Amer was already freed last week, Shias have continued to hold protest actions for nine other prisoners who have been held without trial for more than 14 years. Protest actions are deemed illegal in Saudi Arabia, pushing Shias to declare March 11 as a “Day of Rage.”

On March 10, “as the procession in the heart of the city was about to finish, soldiers started shooting at the protesters, and three of them were wounded,” a witness said in a BBC report. Other accounts, the report added, say that the police also used “stun grenades and had beaten the protesters with batons, injuring many more than three.” 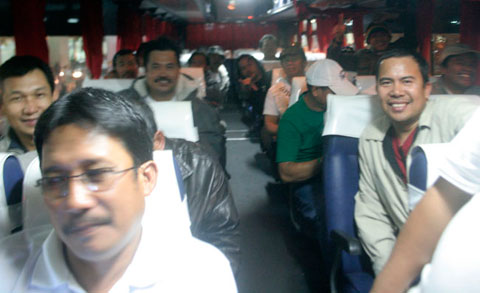 OFWs from Libya inside the bus provided by OWWA. (Photo by Janess Ann J. Ellao / bulatlat.com)

In Bahrain, on the other hand, tens of thousands of protesters stage daily demonstrations and marching on state and financial institutions which, they say, symbolize political oppression and economic inequality in their country.

The protesters, in a report, said that “they will not leave Pearl Square,” the center of their protests, “until they get rights equal to those of Bahrain’s Sunnis and a constitutional monarchy with an elected government” while others insist that the Al Khalifa family, who ruled Bahrain for 200 years, should also leave.

On February 17, about four anti-government protesters were killed while some 95 were injured when the police fired rubber bullets and tear gas in the Pearl Square without warning. “I am wounded. I am bleeding. They are killing us,” a protester said in a report.

Two people, on the other hand, died in a protest action in Oman when the police fired rubber bullets on the protesters. Described as a “normally quiet sultanate,” Oman has joined the protests shaking the Arab countries for the past two months. The said protest on February 27 was reported to have started peacefully until the police intervened, leaving protesters to burn several government buildings.

The locals in Oman were reportedly demanding for political reforms, more jobs and better pay. About three million are currently out of work as businessmen in Oman opt to hire migrant workers whenever possible “to get two or three for the price of one.”

In Yemen, four people were killed and seven others were injured when soldiers opened fire at the anti-government protesters last March 4. Reports said that the shootings happened when the soldiers tried to disperse thousands of protesters. As protesters in Yemen threw rocks at the troops, soldiers used heavy machine guns.

On March 9, security forces opened fired in Sanaa, Yemen, where 80 people were injured, saying that they were trying to stop thousands of people joining a protest camp at a university calling for the resignation of President Ali Abdullah.

“It is a crime by security troops against students engaged in a peaceful sit-in,” Yemen opposition spokesman Muhammad Qahtan told Associated Press in a report.

In a DZRH interview, Department of Foreign Affairs undersecretary Rafael Seguis said that they are hopeful that the political unrest in Saudi Arabia will not be a serious threat. “Yes, we are focusing on that country because it has the biggest number of Filipino workers.”

Seguis said the DFA is monitoring other countries in Middle East and North Africa where anti-government protest actions continue to loom.

In Yemen, for instance, the DFA asked Filipinos “to restrict their movements to only those who are absolutely essential and also to voluntarily depart the country in view of the going tensions in the country.”  The DFA added that there is yet no need to raise the level to alert level 3, which means voluntary repatriation for OFWs in Yemen.

“We are closely monitoring (Yemen). We don’t have an embassy in Yemen but we have teams there who have started to register Filipino nationals,” Seguis added. He also said the DFA believe that the situation in Oman will normalize as they are “not for a regime change but rather for socio-economic concerns.”

Migrante’s Middle East regional coordinator John Monterona said that while peace and order situation in Saudi Arabia may or may not worsen with the planned demonstration on March 11 and March 20, “it is but prudent for (President Benigno S.) Aquino to immediately repatriate more than 1,000 stranded OFWs and children in Jeddah deportation center” and those who are “temporarily seeking refuge at al-Mina Hajj terminal in Jeddah.”

Monterona said labor attaché Vicente Cabe said on March 3 that stranded OFWs, whose membership to the Overseas Workers Welfare Administration (OWWA) have already expired  could get airplane tickets from the DFA Office of the Undersecretary for Migrants Welfare Affairs. “In such case, the DFA-OUMWA should immediately release the budget for the plane tickets of the majority of the stranded (OFWs) as they have undocumented for more than one year and were not able to renew their OWWA membership.”

“They need to be repatriated as soon as possible. We do not want them to be left behind in case political turmoil will besiege Saudi Arabia,” Monterona said.

Monterona added that Aquino should immediately deploy a Philippine ambassador to Saudi Arabia after former Ambassador Antonio Villamor ended his tour of duty on September 30.

“We could not understand, despite clamor from Saudi-based OFWs, why Aquino could not appoint a Philippine envoy to Saudi particularly now that the latter’s services are badly needed in time of political uncertainties in the Arab region,” Monterona said.

Martinez, for his part, said that in the event of a civil war in Saudi Arabia, where there are roughly 1.5 million Filipinos, “all hell will break lose.”

“None of us wish for this to happen but in the light of the government’s poor performance in the crisis in Libya, there is a need for a contingency plan for a worst case scenario. They said that they are “closely monitoring the situation but they have said the same thing in Libya and low how they scrambled out,” Martinez said.

Martinez said that the worsening crisis of the OFW sector is a wake-up call for the government to review and desist in the implementation of its labor-export policy. “There are roughly 15 million OFWs all over the world, not by choice but because of forced migration as no jobs are locally available” in the Philippines, he said. “It should seriously instigate an overhaul of the system and focus on land reform and national industrialization to create more jobs at home.”