Randy Felix Malayao, a consultant of the National Democratic Front of the Philippines (NDFP), said that legal offensives against critics and activists continue to be part of the new administration’s counterinsurgency strategy.

Malayao was abducted by agents of the 5th Infantry Division of the Philippine Army on May 15, 2008 in Cainta, Rizal. He was tortured for four days and was surfaced only on the fifth day. He was later informed that he has been slapped with two murder charges and one charge of frustrated murder.

“Psywar is an important component of Oplan Bayanihan. Legal offensives continue, not only during the Gloria Macapagal-Arroyo regime,” Malayao told Bulatlat.com in an interview through mail.

In June 2010, Malayao was acquitted of murder charges filed against him for the killing of former Cagayan governor and congressman Col. Rodolfo Aguinaldo and his bodyguard Joey Garo and of frustrated murder of Aguinaldo’s secretary Amelia Soriano. 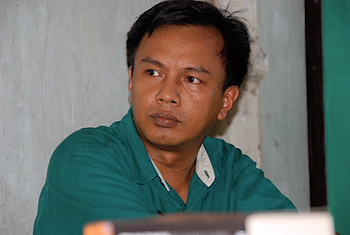 Malayao, however, is still facing direct assault with murder in connection with the ambush of some military personnel in Balgan, San Mariano, Isabela; for allegedly killing three more men including a barangay (village) captain of the same town, Benjamin Olalia, Jr. of Ilagan, Isabela and an Army soldier in the same place.

Malayao said the military has been claiming that he was there when the ambush happened. “They are banking on positive identification by a witness, which is fabricated,” he said.

“They just changed the name [of the counterinsurgency program], but it is essentially the same strategy,” he said.

Malayao also deemed that the arrests of Tirso Alcantara and Alan Jazmines a mockery of the peace process. Like Malayao, Alcantara and Jazmines are covered by the Joint Agreement on Security and Immunity Guarantees (Jasig).

Alcantara, a high-ranking member of the New People’s Army in Southern Tagalog, was arrested on Jan. 4 while Jazmines was arrested on Feb. 14, eve of the formal talks between the NDFP and the Government of the Philippines (GPH).

“These two are prominent leaders and valued consultants of the peace process. I could not see the sincerity of the government when they denied them and the others of their Jasig protection,” Malayao said.

In the recent peace negotiations, the GPH committed to work for the expeditious release of political prisoners, especially those covered by Jasig.

Asked about this, Malayao said: “I could not feel it. In fact, I am the one who initiated a move. I already wrote to Pabilito Sanidad, the GPH legal team, but I got no acknowledgment until now. Although they keep on promising to the media that they shall work it out…” Malayao is detained at the Bureau of Jail Management and Penology District Jail in Ilagan, Isabela.

Malayao said he keeps himself busy by leading fellow inmates in all allowable inmates’ programs such as peer counseling, health/medical services, religious and church-related activities, sports, cultural and recreation, education and livelihood. Sometimes, his help is being sought in office work.