The alliance of workers and various cause-oriented groups Defend Job Philippines is backing the fight of employees of Banco Filipino Mortgage Bank against what they said was unjust and inhumane lay-off.

Banco Filipino employees held a protest recently in front of the Bangko Sentral ng Pilipinas (BSP) in protest of the announcement that all 700 of them will have been laid off after the BSP’s order of closure against the thrift bank. They were joined by Defend Job Philippines which is also a group formed by workers from Triumph International, ABS CBN, Philippine Airlines, Pepsi Cola, call centers and from different sectors who were also victimized by unjust lay-offs, illegal closure and other forms of labor rights violations.

Defend Job Philippines said that the sudden termination of the more than 700 workers can be considered illegal because the employees under their two unions, the Banco Filipino Supervisory Union and Banco Filipino Staff Union, were not notified 30 days before the lay offs were implemented.

“The 30 days notice is legally stated in the Philippine Labor Code to ensure the rights and welfare of every Filipino worker and to observe due process. This was violated in the case of the Banco Filipino bank employees. The employees learned on March 17, 2011 about the decision and order of BSP to close BF and immediately put under the receivership of the Philippine Deposit Insurance Corporation or PDIC. On the same day, the employees were not allowed to work anymore and were terminated from their jobs,” the group said.

A day after the BSP placed the thrift bank under the receivership of the PDIC, the state deposit insurer decided to suspend all bank employees while bank records are being investigated. The PDIC took over the bank on March 17 when the BSP declared the thrift bank close after withdrawals were not serviced and checks were not funded. The PDIC is a government corporation that insures deposit claims up to P 500,000 ($11.5 thousand).

Not Only a Banking Industry Issue 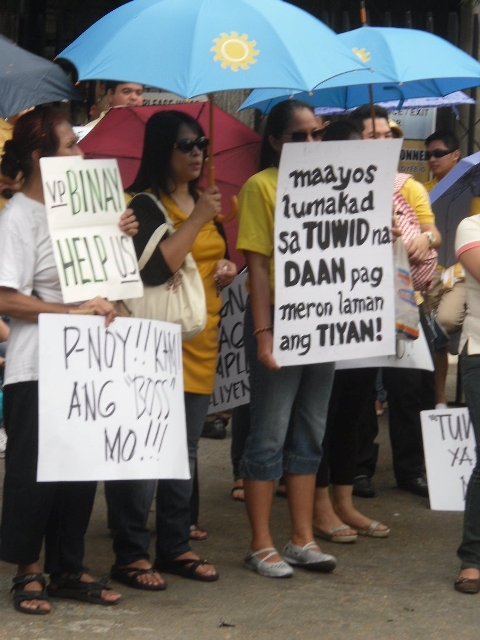 The alliance also denounced the lack of concern of the Aquino government for the Banco Filipino employees. According to reports, Malacanang considers the issue of the closure of Banco Filipino as strictly a banking industry matter. ?

“What about the jobs and lives of more than 700 employees and their families who are affected? How about the savings and life of thousands of depositors of Banco Filipino. Where will they go? What will happen to them?”, Defend Jobs Philippines said.

According to reports, Malacanang will not intervene in the financial and regulatory troubles of the thrift bank. Presidential spokesperson Edwin Lacierda has also said that the issue is a “banking supervision matter” and that the Bangko Sentral will be left to address it.

“We have heard that complaints have already been made to Banco Filipino. Depositors should refer their complaints to Bangko Sentral,” Lacierda said.

Depositors, which total over 177,000 nationwide have been in a panic having been largely unaware of the bank’s financial problems.

Banco Filipino versus the Central Bank

Observers say that the closure of Banco Filipino has to do with its long-standing feud with the BSP. Based on records, in 1985, the Supreme Court did not uphold the Banco Filipino’s closure as demanded by the central bank. The thrift bank was again allowed to operate in 1994. On March 2010, the Makati Regional Trial Court required the BSP to provide Banco Filipino with rehabilitation assistance and pay the latter costs in all amounting to at least P30 billion pesos.

In the wake of the PDIC’s take-over, however, the BSP is now insisting that it does not owe Banco Filipino anything and that it will appeal the case in the Supreme Court. The BSP has repeatedly said that the thrift bank’s closure is because of the supposedly numerous complaints filed by its clients.

On March 22, the owners of Banco Filipino filed 74-page petition for certiorari and mandamus with the Court of Appeals, seeking the immediate issuance of a temporary restraining order and writ of preliminary mandatory and preventive injunction prohibiting the implementation of Monetary Board’s (MB) Resolution No. 372-A closing Banco Filipino. The MB is the central bank’s policy-making body.

The petitioners insisted that the BSP committed grave abuse of discretion in issuing the closure order, and denied the central bank’s claim that Banco Filipino was operating under unsound banking practices. Banco Filipino said that the BSP’s order of closure against it violated Sec. 53 of Republic Act 8791 or the General Banking Law as it was done without prior hearing and due process.

According to the provision, the MB may summarily close a bank and place it under receivership if it fails to notify the BSP or publicly announces a bank holiday or if it suspends the payment of its deposit liabilities for more than 30 days.

“In this case, there was never a notification or announcement by Banco Filipino, whether to respondent BSP or to the general public, that it was going through a bank holiday. Neither has there been a continuous period of 30 days wherein Banco Filipino has suspended the payment of its deposit liabilities,” the petitioners noted.

Then, on April 1, Banco Filipino and its stockholders filed a graft complaint again against officials of the BSP and members of the MB at the Department of Justice.

According to the complaint, The BSP and Monetary Board officials are guilty of violating section 3(e) of the said law for causing undue injury to Banco Filipino, its stockholders and depositors through manifest partiality, evident bad faith and gross and inexcusable negligence when the BSP and the MB refused to act on Banco Filipino’s application for emergency loans and thereafter ordered the closure and receivership of the bank.

In any case, whatever the real reason behind the thrift bank closure, the effects remain devastating, not only to the depositors who are now finding it extremely difficult to get their money back, but more so for the terminated employees.