Gabriela also deplored the US wars of aggression. “No other nation in the world has an army as widely deployed around the globe, as active in many wars of aggression, and who has intervened in the internal affairs of other countries either through direct actions or with the aid of puppet regimes than the United States,” Salvador said, adding that “None has probably spawned more widespread and long-standing abuse, exploitation and human and civil rights violations of peoples of the world but the US.” 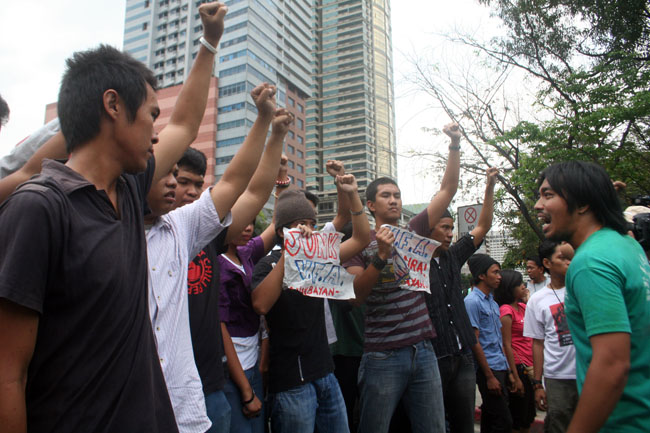 Members of League of Filipino Students condemn the continuing US military intervention in the Philippines.(Photo by Janess Ann J. Ellao / bulatlat.com)

Reyes linked the US military exercises in the Philippines to the over-all power projection in the Southeast Asian region of the US. “It keeps US military presence alive in the area and prepares US troops for possible interventionist acts when US interests demands it,” he said of Balikatan.

For the group Bayan, the US involvement in Iraq, Afghanistan and lately, Libya is actually “armed intervention and aggression”.

Gabriela said that the people of Libya have now been turned into “unwitting victims” of the military intervention led by the US and the North Atlantic Treaty Organization (NATO) in the African state.

“Contrary to what the US wants the world to believe, their military actions in Libya smacks of direct intervention to secure the interests of US and its allied nations: to remove Gadhafi, replace him with a reliable puppet, and ensure the economic stakes of the US and other imperialist countries in oil-rich Libya,” according to Salvador of Gabriela. She added that all the US military aggression are putting civilians, including women and children, in dangerous situations and causing harm to their lives and properties.”