“Even if the remaining adjustments for 2012 under the SSL 3 is released this year, this will only mean a new minimum pay of P9,000 (US$209). This is not even half of the P29,000 (US$674) monthly cost of living. As it is, we have yet to receive the increase and yet the amount is already lost to inflation”. – Wage Fight! Alliance

Government employees from various line agencies and institutions vow to come out en masse on May 1, International Labor Day. In a rally in Mendiola last April 6, hundreds of government employees, public school teachers and public health workers united under the Wage Fight! Alliance called on President Benigno Aquino III to respond to their demand for a P6,000 (US$140).

Courage president Ferdinand Gaite said Malacañang cannot deny that employees of the bureaucracy are severely affected by the economic crisis.

“Of course when we say ‘government employees’ we do not include the thieving officials in the various offices of government. They are not affected by the crisis because they’re enjoying their ill-gotten wealth, money directly taken from public coffers. As they continue to wallow in their own corruption, the rank and file employees are all but attempting magic to stretch their small salaries,” he said.

JUDEA President and Wage Fight! Alliance Spokesperson Maurino Aguilar in the meantime condemned the government’s easy dismissal of the workers’ demand for a substantial wage increase.

“We are outraged to learn that Malacañang has declined to prioritize the wage hike bills – HB 3746 for state workers and HB 375 for private sector workers, both sponsored by Anakpawis Rep. Rafael Mariano – filed in Congress. This thumbs down is indicative of Aquino’s indifference to the sorry plight of workers and employees nationwide.

Aguilar said that even as court employees welcome the wage hike afforded to the judges and judiciary employees, they still demand that the same be given to all rank-and-file government employees.

“We are all affected by the soaring prices of commodities and services. The crisis cuts across all levels of rank-and-file government employees and Malacañang should do something about it. President Aquino said that he is against corruption, but he has not really proven it because up to now the corrupt officials of agencies like the Government Social Insurance Service (GSIS) have escaped accountability,” he said.

Salary Hikes for Big Officials, Zero for the Rank and File

Regarding Malacañang’s previous announcement that employees should not expect any salary hike other than what they are scheduled to receive in July, Aguilar said, the salary adjustment (under the Salary Standardization Law 3) is too meager to make a difference.

The minimum pay in the public sector currently stands at P7,510 (US$175) excluding the mandatory deductions.

Aguilar said unions and associations of government employees are demanding a P6,000 increase in the minimum pay also as a form of protest against the SSL 3. He explained that the said ruling on salary adjustments effectively raised the salaries of those occupying the higher positions and government officials, but did nothing to increase the salaries of the rank and file.

“Malacañang wants us to be grateful that we are getting a salary adjustment in July, but will it actually do any good, given how small it is? Consider what is happening now: oil companies are poised to impose another round of price increases in the next few days. Meralco has announced that a 30 centavo per kwh adjustment in the generation charge is in the offing. Malacañang expects us to be grateful?” 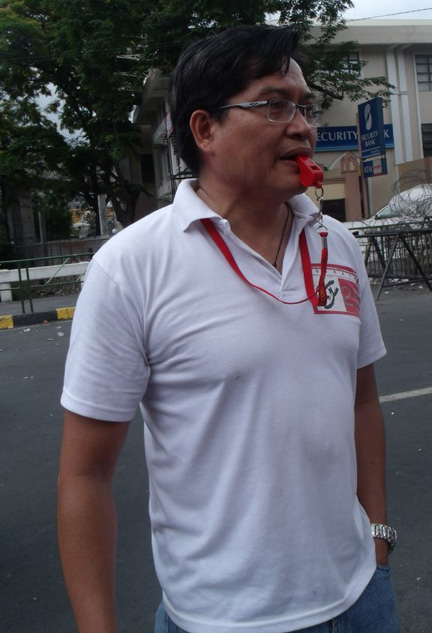 Ferdinand Gaite, Courage President, says that because of EO No. 7, rank and file employees have been forced to endure the moratorium and freeze on benefits and other incentives. (Photo by Ina Alleco R. Silverio / bulatlat.com)

Both Gaite and Aguilar said thousands of government employees will take to the streets on Labor Day to protest against Malacañang’s continued neglect of the labor sector.

As they prepare for Labor Day, groups allied with Courage are also highlighting their opposition against President Aquino’s Executive Order No. 7 which he passed last September 8 in the wake of exposes on officials and executives of Government owned and Controlled Corporations (GOCCs) receiving millions of pesos in allowances, incentives and benefits.

Malacañang said it released the EO to rationalize and standardize the compensation and other remunerations granted to all board of director/trustees, officers and rank and file employees of GOCCs and GFIs and to impose a moratorium on increases in salaries, allowances, incentives and other benefits of members of the Board of Directors/Trustees of GOCCs and GFIs and consider privatization as basis for setting the compensation levels.

Gaite insisted, however, that EO 7 sorely fails to directly address the very purpose for which it was supposedly made – to review and remedy the scandalously exorbitant allowances and other perks being enjoyed by the officers and members of the board of trustees/directors of GOCCs and GFIs.

“What the order did is to only suspend the granting of these perks etc up to December 31, 2010 or, in some cases, until new policies and guidelines have been issued. The order was primarily an act of lip service against corruption – it does not go beyond the usual rhetoric or encourage the prosecution of identified officials who themselves thought of the perks, approved the same and appropriated the needed funds. The CoA has already released a list of the top 40 officials who received millions in 2009 alone, but EO 7 said nothing about them,” he said.