As Malacañang thumbs down the demand of government employees in the country for a substantial wage increase, research groups have taken turns debunking government claims that salary and wage hikes are impossible to implement given the current economic conditions.

Current Wage Provides Only 41 Percent of What Families Need

According to the IBON Foundation, the daily minimum wage of P404 (US$9.39) is just 2/5 of the estimated average family living wage (FLW) of P988 (US$23) in the National Capital Region (NCR) as of March 2011. The family living wage is defined as the minimum amount needed for a family of six members to meet their daily food and non-food needs plus a 10 percent allocation for savings. The latest living wage estimates are based on the 2008 family living wage computation of the National Wages and Productivity Commission of the Department of Labor and Employment (DOLE). 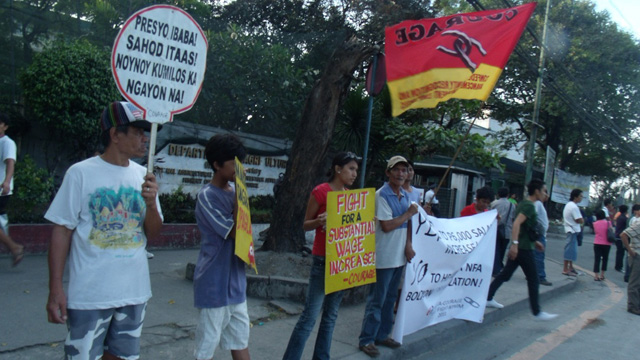 As the DOLE and the wage boards deliberate on whether to give a wage hike next month, the research group urged government to raise wages to a decent level and approximate the wage increase to the estimated family living wage.

Adding to the urgency of a wage increase, a labor research group said, is the fact that the combined wage increases in the past decade had been totally eroded within only eight months by nonstop price hikes under the Aquino administration.

The Ecumenical Institute for Labor Education and Research (EILER) said that from the start of Aquino’s term in July 2010 up to February this year, the real value of the P404 (US$9.39) minimum wage in the National Capital dropped by around P7 (US$0.16) This decline cancels out the net increase in the real value of minimum wage under the Arroyo administration from 2001 to 2010, which amounted to only P5 (US$0.11).

She said that the wage erosion comes as no surprise as local pump prices have increased more than ten times since the start of year while the prices of almost all food commodities have also risen.

” There are also looming power and water rate hikes. Such record erosion of wages points to the government’s callousness in calling on Filipinos to wait for the inflation to reach five percent before the government can approve any wage increase,” Escresa said.

Government Should Take Care of its Employees

In the meantime, labor groups are determined to press for their economic demands no matter what Malacañang says. 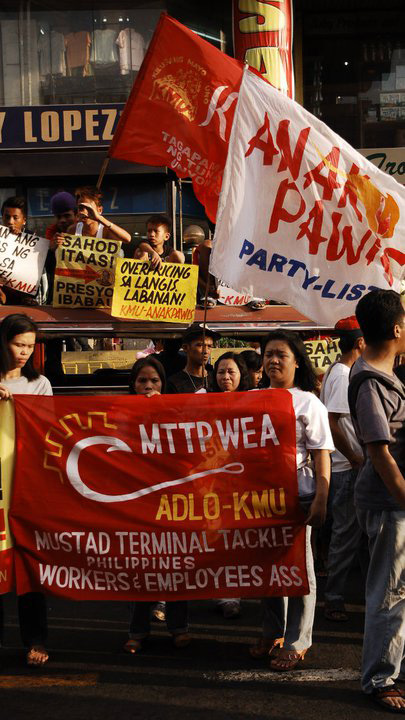 Labor groups led by KMU and COURAGE are determined to press their economic demands no matter what Malacanang says. (Photo courtesy of Kilusang Mayo Uno / bulatlat.com)

The Confederation for Unity, Recognition and Advancement of Government Employees (COURAGE) said that it would continue their campaign for a P6,000 ($138) increase in the monthly minimum pay of all public sector employees.

“True to its character, the Aquino administration is skirting the issue by saying that its hands are tied because of the Salary Standardization Law 3 which mandates a staggered wage adjustment scheme for state workers. For the country’s rank-and-file government employees who are already struggling to survive amid the rising costs of commodities, the issue is already beyond the SSL 3. We all know that it allowed only the smallest pay adjustments and failed to provide immediate economic relief to the lowest-paid government employees. We will continue to press for a P6,000 salary hike,” said Courage President Ferdinand Gaite.