Gaite was referring to Presidential Spokesperson Edwin Lacierda’s statement that the administration was “limited by law” and therefore unable to act upon the employees’ demand for a substantial wage increase.

“At the time when our wages are pegged at near-starvation levels, we don’t need dole-outs, subsidies or excuses, we demand a substantial wage hike now!” Gaite said.

Gaite said that their group was also fully behind the call of private sector workers for a P125 across-the-board daily wage hike. The Kilusang Mayo Uno (KMU) is at the forefront of the campaign for the wage hike.

Gaite slammed the price hike, saying “Government employees, like the majority of the Filipino people can no longer cope with the rising prices of commodities and services. As it is, we are already struggling to subsist on our meager salaries. With this recent oil price hike, most of the country’s 1.4 million government employees are living in abject poverty, are prey to loan sharks and could barely make it to the next day to work. Thus, we have no other recourse but to push for a substantial salary adjustment, this time, focusing on the minimum pay earners or those employees who suffer the most,” Gaite declared.
The labor leader in the meantime also expressed disgust over the Aquino government’s continuing inaction to stop the continuing oil price hikes. 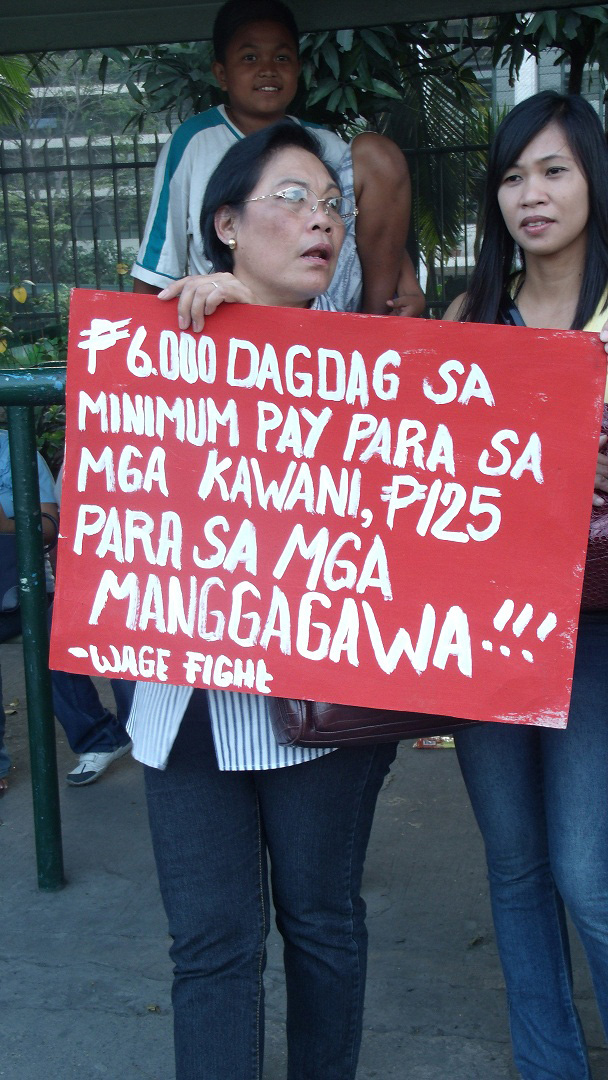 “DOE (Department of Energy) Undersecretary Jose Layug Jr even has the gall to tell us that the fuel firms’ P1.50 hike was already an accommodation of the government’s request to soften the impact of oil price hikes. This attitude of a ranking government official is a reflection of the over-all stance of the Aquino administration when it comes to the oil companies: the oil cartel continuously raises its prices while the government rushes to justify the abuse,” Gaite said.

Gaite said that President Benigno Aquino’s apathy toward the legitimate demands of the labor sector is most lamentable.

“Instead of pushing for band-aid solutions like paltry subsidies available only to selected sectors, Aquino should immediately implement a substantial wage increase for both the public and private sector in order to provide immediate economic relief to the workers and employees reeling from the unabated price hikes, “ Gaite asserted.

Student group Anakbayan is also incensed over Malacañang’s refusal to implement a wage hike and said that the reasoning of Palace spokespersons on the matter was severely lacking in sense.
“A high school dropout could have made a better analysis,” said Anakbayan chairman Vencer Crisostomo.

Crisostomo cited a study by the independent think-tank IBON Foundation showing that the combined profits of all establishments in the country employing at least 20 people is pegged at P895.2 billion (US$20million), while their employees collectively earn only P2.74 million (US$637,000) . The study further calculated that a P125 (US$3) increase, translated to an additional employers’ expense of P3,802 a month (US$88) or P49,427 (US$1,150) a year, will only lead to a total employers’ expense of P135.6 billion (US$315,349). This amount is only 15.1 percent of the establishments’ combined profits.

“Contrary to what Aquino and his spokespersons led by Ricky Carandang, and all of big businesses’ representatives in government are saying, the country’s businesses have more than enough money to pay for the much-needed P125 nationwide across-the-board wage hike without increasing the prices of their goods and services,” Crisostomo said.

Crisostomo dismissed claims by the Aquino administration that employers cannot afford a wage hike . He repeated a statement made by Albay governor Joey Salceda that under the former administration, the country’s top 1000 corporations earned an average of P3.1 trillion ($71.6 million) , re-investing only P1 trillion ($23.1 million), and pocketing the balance.

The youth leader also said that the much-hyped issue of ‘runaway inflation’ will only happen if capitalists seek to maintain the same level of super-profits after any pay raise.

The government has previously said that a wage hike will further cause more price increases.

Crisostomo challenged the Aquino administration to enact measures to prevent businesses from increasing prices and rates after the said hike, instead of ‘foot-dragging’ the passing of a bill in Congress which will mandate the wage raise.

“What is 15 percent less profits for the likes of the Ayalas, Lopezes, Cojuangcos, Sys, and Tans? Maybe they won’t be able to buy that new Porsche or Lexuso, but it will be a big help to the ordinary Filipino suffering under high prices,” he said.