ABRA DE ILOG, Occidental Mindoro – Amid the destitution being suffered by the Mangyans, the entry of mining companies and other government projects threaten their very existence.

Even as the more than 500 Mangyans from seven tribes who attended the Mangyan Day on April 15 to 16 in Balao village, Abra de Ilog, spoke different languages, their desire to defend their ancestral land against foreign mining companies and government agencies united them.

Mining companies Intex Resources, Agusan Petroleum Mining Corp. and Pitkin Resources Ltd. are eyeing the Mindoro provinces for their mining operations. There are also three dam projects in Oriental Mindoro, the Alag River Dam in Baco and San Teodoro towns, the Bagto River Dam in Naujan town and Bongabong River Dam. The projects will cover more than 200,000 hectares of land and threaten to displace more than 200,000 indigenous peoples from the ancestral land.

Chewing betel nut together as a symbol of their unity, leaders of Mangyan tribes of Hanunuo, Alangan, Gubatnon, Iraya, Buhid, Bangon and Tadyawan exchanged songs depicting their resistance to foreign-controlled, destructive, large-scale mining. The ritual is called ambahan.

“We, Mangyans, avoid problems but now, it cannot be avoided. The only solution is our unity,” a Bangon leader said, explaining his song.

A Buhid leader, meanwhile, sang about the need to fight dam and mining projects. Another Bangon leader said they will defend their land.

The Mindoro Nickel project of Intex Resources is one of the government’s 63 priority mining projects.

According to Kalipunan ng mga Katutubong Mamamayan ng Pilipinas (Kamp), an alliance of indigenous peoples organizations, more than 99 applications for mining will cover 50 percent of the Mindoro land. These include the approved applications for Mineral Sharing and Productivity Agreement (MPSA) in Abra de Ilog covering 60,000 hectares of land. Agusan Petroleum and Mineral Corp. was given Financial or Technical Assistance Agreements (FTAAs) in Abra de Ilog, Occidental Mondoro and San Teodoro, Oriental Mindoro covering more than 46,000 hectares. 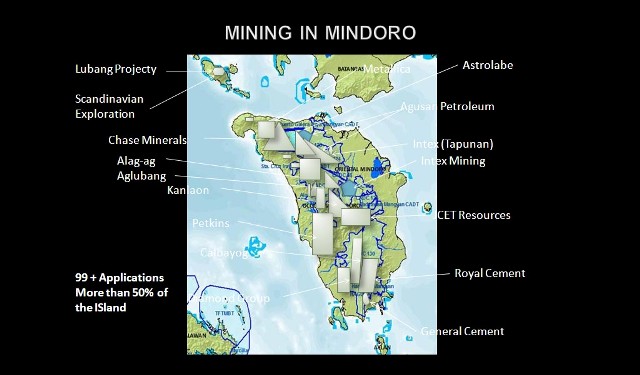 Kamp, Katribu party list and other indigenous peoples groups have identified Mindoro as one of the Ancestral Lands at Risk of Mining (ALARM) sites. The Mindoro island is rich in mineral resources http://region4b.mgb.gov.ph/?q=mindoro-island.

The local laws were enacted pursuant to Republic Act 7160 or the Local Government Code of 1991, which empowers local government units to enact laws to protect the environment and mineral resources.

“The national government did not respect the local ordinances and the united opposition of the peoples of Mindoro against mining,” the Mangyan Declaration, a statement signed by Mangyans during the gathering, stated.

Intex Resources was granted environmental clearance certificate to mine nickel in barangay Pag-Asa, Sablayan in Occidental Mindoro and in barangay Villa Cerveza in Victoria, Oriental Mindoro.

Agusan Petroleum was given an exploration permit in Abra de Ilog town in Occidental Mindoro and in Puerto Galera and San Teodoro in Oriental Mindoro.

The DENR also allowed Pitkin Ltd. to conduct oil exploration in portions of towns of Sablayan, Calintaan, Rizal, San Jose and Magsaysay in Occidental Mindoro and in Bulalacao in Oriental Mindoro.

Pastor Marcelo Carculan, chairman of the Mangyan organization Hanunuo, Alangan, Hanunuo, Gubatnon, Iraya, Buhid, Bangon and Tadyawan (Hagibbat), told Bulatlat.com that they do not want to experience what happened to the peoples of Marinduque and Benguet. “Mining operations in these provinces severely affected the livelihood of the people,” he said.

Carculan recalled that in 2008, the Agusan Petroleum and Mineral Corp. went to their village and told them about the mining project. “They told us we would have jobs and our lives would be better. We do not believe them and we opposed the exploration,” he said. 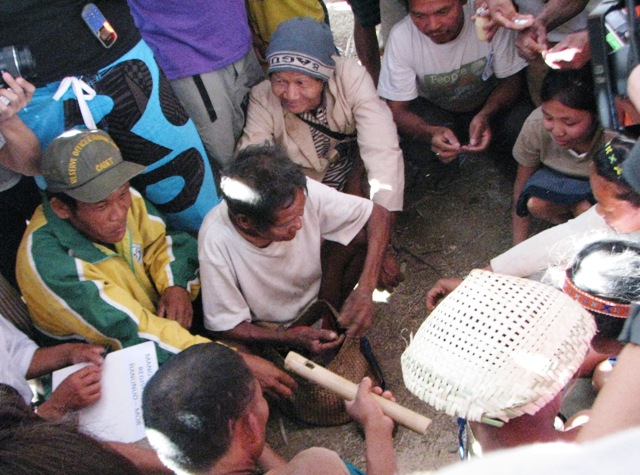 Mangyan leaders from seven groups chew betel nut together as a sign of unity in defense of their ancestral land.(Photo by Ronalyn V. Olea / bulatlat.com)

Carculan also accused the mining company of fabricating the Free, Prior and Informed Consent (FPIC) of the community. He said that the attendance record that they signed for the meeting was used as proof of their ‘approval’ of the mining project. “We wrote a petition that we submitted to the local government and then to Malacañang. The exploration was stopped for two years but now the mining company wants to resume operations,” he said.

In an interview, Yamo Bangdayan, a Hanunuo-Mangyan from Balugo village, Mansalay, Oriental Mindoro, said they are opposing mining because it destroys the environment. Mansalay town is rich in baryte. “The mining company dug the soil, damaging the environment,” Bangdayan said, referring to Agusan Petroleum.

“They even told us they would pay for the trees and other crops at the site but they did not,” Bangdayan said further. The community filed a petition to the local government, leading to a halt in operations. “Now, they are attempting to operate again,” he said.

Meanwhile, Altang Dawsig, a Bangon-Mangyan from Lisap village, Bongabong, Oriental Mindoro, is opposing the 28-megawatt hydropower project of the Philcarbon and Constellation Energy Corp., a subsidiary of EnerAsia Renewables Corp. of Canada.

“They have started measuring the river and building posts,” Dawsig said. “If the project will push through, we can no longer reach the town proper.” Dawig said they cross the river to reach the town.

Dawsig decried that they were not consulted about the project. “We, Mangyans, are not the only ones affected here but the Tagalogs in the area, too,” he said.

Carculan said reforestation and tourism have also displaced Mangyans from their ancestral land.