Special report: A difficult life for the Mangyans

ABRA DE ILOG, Occidental Mindoro –Cora Senigman, an Alangan-Mangyan, went to town to sell six kaings (large baskets) of calamansi she and five other Mangyans harvested for three days. The merchandiser wanted to buy her produce at P1 per kilo. The total amount would not even cover her transportation expenses. Refusing to be fooled and out of frustration, she just threw away the calamansi.

Rowena Lindog, a Tadwayan-Mangyan from Socorro, Oriental Mindoro, said the merchandiser bought their camote, a root crop, at P10 for three kilos.

Yamo Bangdayan, a Hanunuo-Mangyan from Mansalay, Oriental Mindoro, told Bulatlat.com that merchandisers buy 100 pieces of banana for P50 and five kilos of camote for P60 to P70.

Luz Brozula, director of the Integrated Development Program for Indigenous Peoples (IDPIP) of the United Church of Christ in the Philippines (UCCP)-Southern Luzon Jurisdiction, said that Mangyans are often duped by capitalists because of their lack of formal education and because of their kindness.

“The pay we get could not compensate for our hard work,” Rowena, a mother of seven, said.

“We always experience hunger,” Cora, a mother of three, said.

The Mangyans are the original inhabitants in Mindoro provinces. Divided in seven groups, they comprise 20 percent of the population of Oriental and Occidental Mindoro, numbering more than 200,000.

Farming is their means of livelihood. They plant root crops such as gabi (taro) and camote (sweet potato), banana and vegetables. Many practice kaingin or slash-and-burn. Few are able to plant palay (rice) and raise poultry.

“We do many things in order to survive,” Cora said. “If one could not be done, we do the other,” she said, citing planting palay, selling banana or root crops or making charcoal. 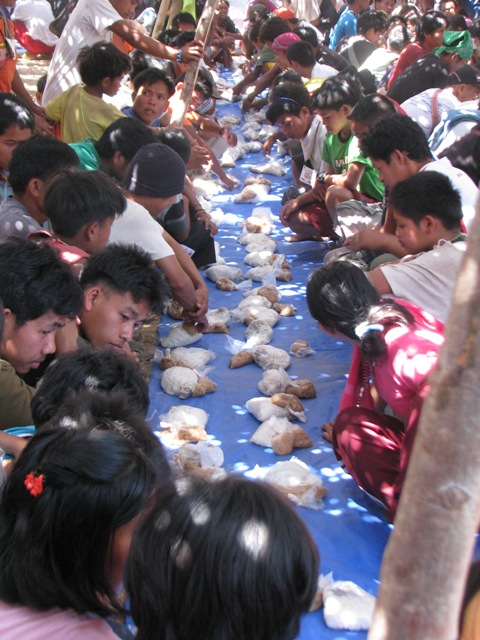 Rice and pansit with sardine sauce is already a feast for Mangyans(Photo by Ronalyn V. Olea / bulatlat.com)

Pastor Marcelo Carculan, chairman of the Mangyan group Hagibbat, related that San Miguel Corp. went to their community in Balao village, Abra de Ilog, Occidental Mindoro last April 10 and bought balinghoy (cassava), a root crop. “The Mangyans were told they would be paid P150 per kilo. They agreed, thinking it was P150 but it turned out to be P1.50 for every kilo,” Carculan said.

Mangyans who work in the farms of Tagalog farmers, are paid P150 a day. They are not provided food. For those who plant palay, Mangyans borrow P1,000 and pay four sacks of rice, Carculan said.

Cora, who lives in Dulangan tres village, Baco, Oriental Mindoro, is among those who plant palay in a land that has been covered by Comprehensive Agrarian Reform Program (CARP) since 1996.

“Even before the land was placed under CARP, we, the indigenous people, have cultivated it for many years. We were told that a landlord owns the land and we have to pay compensation,” Cora said.

Cora said they harvest ten sacks for every hectare of land. Seven sacks go to DAR as payment for the land and only three are left with them. The supply would last for three months.

Although they work from dawn until night, they do not have enough food for their families.

Yamo said they only eat rice once or twice a week. “If we have tiangge (small market), we can eat rice,” he said, but added that the local government is planning to ban tiangge in the communities.

Rowena said they seldom eat meat, only when they are able to raise poultry.

Cora said to be able to get more food for the children, many Mangyan women would pick palay from the thresher.

Aggravating their miserable economic conditions is the lack of government’s social services.

For one, health services are alien to most Mangyans. 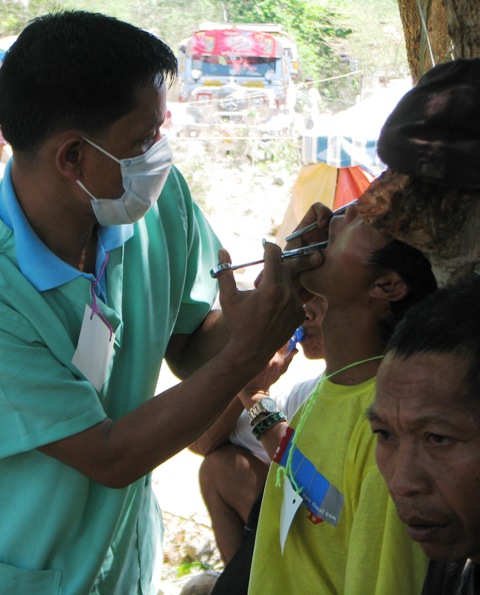 Only during medical and dental missions such as this that Mangyans are able to avail free health services.(Photo by Angelica de Lara / bulatlat.com)

From Yamo’s place, for example, the nearest hospital is a ten-kilometer walk and a jeepney ride that cost P50. While there is a health center in Mansalay, Yamo said, a doctor is barely there.

Altang Dawsig, a Bangon-Mangyan from Lisap village in Bongabong town, Oriental Mindoro, said they have to walk the whole day to go to the nearest hospital. Altang said the village health center nearby collects fees and there is no doctor there most of the time.

“Many of our tribesmen die without reaching the hospital,” Altang said.

Malaria afflicts most of Mangyan communities. Many also die of tuberculosis.

Malnutrition rate is high among the children. Children die of treatable diseases such as diarrhea and measles.